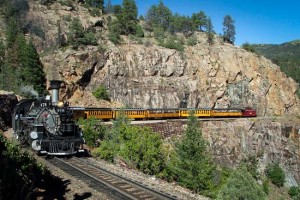 The Durango & Silverton Narrow Gauge
Railroad,
which was featured in “Butch Cassidy
and The Sundance Kid.”

Durango was the set for the classic film, Butch Cassidy and the Sundance Kid, a western starring Robert Redford and Paul Newman that chronicles the mostly true tale of the outlaws’ last months. The film features train robbery scenes that were shot on the Durango & Silverton Narrow Gauge Railroad. Redford reportedly wanted to perform his own stunts, including jumping onto the train and running on top of the cars in motion, but Newman wouldn’t have it.
He said, “I don’t want any heroics around here…I don’t want to lose a co-star.”

In the train robbery scene, Butch, Sundance and the Wild Bunch used dynamite to blow up the safe, sending their loot flying everywhere. Reeling from the explosion, Sundance deadpanned, “Think you used enough dynamite there, Butch?” Apparently, the intensity of the on-set explosion surprised everyone, even the special-effects guys. You can see the train at the depot at 479 Main Avenue in Durango, or in summer hop aboard for a ride to Silverton and back, but don’t get any crazy ideas. Leave running on top of the train and exploding train cars to the pros.

The legendary Baker’s Bridge was also featured in this classic western film. Redford and Newman jumped off the cliff near Baker’s, but they landed on a mattress-cushioned ledge six feet below (Wimps!). If you’re an adrenaline junkie, cliff jump the ABC’s—Adrenaline Falls, Baker’s Bridge, and Cascade Creek. The ABC’s offer exhilarating (if not insane), cliff jumping ranging from 10 to 50 feet in height. At Baker’s you might just see suspended slacklines and daredevils throwing double backflips.

Float the Animus River with Mild to Wild Rafting. What do they mean by “wild?” According to their website: to raft the Upper Animus, all participants must be strong swimmers, in great physical condition, and able to paddle as the boat bounces, spins, and submerges. Submerges? Seriously? If you’re not up for a possible man overboard experience, calmly float down the Lower Animus. No experience is necessary and there’s no mention of swirling and submerging, so this is an excellent choice for sane people. To reserve your float trip, go to www.mild2wildrafting.com or call 970-427-4789.

Who can say no to a Dirty Girl Scout—a martini like the cookie but with booze? Or an espresso martini—double espresso vodka, Kahlua, Baileys and a splash of cream served in a frosted martini glass with shaved dark chocolate espresso beans? Both are featured drinks at the Derailed Pour House. Quench your thirst at this speakeasy style venue that offers craft beers on tap, creative cocktails, and wine, along with delectable eats like pulled pork tacos, Pour House poppers, Southwest eggrolls, and a Cuban sandwich. You might just want to fast-forward through all the outdoor activities and go straight to the Pour House. To learn more, go to http://www.derailedpourhouse.com/.

If Colorado movie madness takes hold, pick up a copy of Hollywood in the Rockies, by Frederic Wildfang, proprietor of Durango’s Rochester Hotel.

Mr. and Mrs. Smith (2005) features an ordinary suburban couple with a lifeless marriage, but they each have a secret: they are legendary assassins working for competing organizations. When the truth comes out, they end up in each other’s crosshairs. Scenes for this action thriller starring Angelina Jolie and Brad Pitt were shot at the Hanging Lake tunnels in Glenwood Canyon. 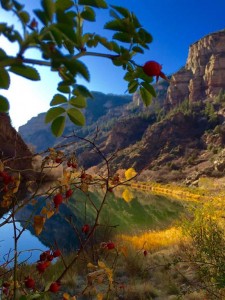 Don’t miss the steep 2.4-mile roundtrip hike to Hanging Lake, a designated National Monument. From spring to early fall, water flows in Dead Horse Creek, sometimes cascading along the rocky trail. As you’re cursing the climb, keep your eye on the prize—a clear turquoise lake fringed by Bridal Veil Falls. If you didn’t know better, you’d think you were in the Caribbean, but the absence of umbrella drinks gives it away. After you’ve snapped all the Hanging Lake selfies you can bear, hike above the lake to Spouting Rock Falls, and feel the mist on your face. Hanging Lake is being loved to death, so to beat the crowds, go on a weekday or on the weekend in the early morning or late afternoon.

If defying gravity is your thing, contact Glenwood Climbing Guides at 970-319-0656 for a climbing fix on a safe and proven route on the east side of the Glenwood Springs Tunnels. Known as the Puoux (pronounced “pukes”), this sport crag offers good Colorado rock climbing and is divided into four sections: Roadside Wall, Main Wall, Upper Levels and Fault Wall. Each section has several climbing routes with varying degrees of difficulty.

If you’re more into rolling than rocking, rent bikes at Sunlight Ski and Bike Shop in Glenwood and bike Glenwood Canyon with incredible views of the towering canyon walls and the snaking Colorado River. Keep your eyes peeled for herds of Rocky Mountain bighorn sheep that sometimes graze along the bike path. In early fall, you might catch a glimpse of a black bear. Don’t worry; they’re so shy you’ll likely only see their posterior as they flee. In other words, no bear selfies. You can bike a max of 12.5 miles each way.

Whether you choose to climb, hike, bike or float Glenwood Canyon, just make sure you’re faster than your assassin spouse!

Even assassins need to eat, and a good place to fuel up is at the Pullman Grill. The Pullman is a refined eatery committed to local product and inspired by the seasons. They serve simple thoughtful food that’s about care in execution and using the best local ingredients. They’re on a mission to make you feel better when you leave than when you arrived. And they mean it. Try the grass-fed burger with caramelized onions or the kale parmesan salad with spiced pine nuts, pickled currants, and champagne vin.

There’s no better way to end the day than soaking at the Glenwood Hot Springs Resort. The expansive pool makes you almost forget that you’re landlocked in the Rockies. Pace yourself in the hot pool; if you overcook yourself, your noodle legs won’t carry you back to your hotel. During peak season, the pool is open from 7:30 am-10:00 pm. www.hotspringspool.com/

For a great night’s sleep, check into the Hotel Denver. It’s quaint and classy, offering old world charm with modern conveniences and is within walking distance of all the best restaurants, the train station and the Glenwood Springs pool. www.thehoteldenver.com Nightly rates in the summer range from $159 to $219.

n Thelma and Louise (1991), an Arkansas waitress and a housewife shoot a rapist and take off in a ‘66 Thunderbird, fleeing their abusive husbands. This film, featuring Geena Davis and Susan Sarandon, is the ultimate road trip chick flick, only it doesn’t end with: girls get boys. Spoiler alert: as best friends, they have each other, and that’s all they need as they hold hands and drive off the canyon’s edge.

Gateway is a town near John Brown and Unaweep Canyons with access to backcountry adventures in the La Sal Mountains and the Uncompahgre National Forest. If you blink, you’ll miss the town, but the surrounding area is well worth exploring. 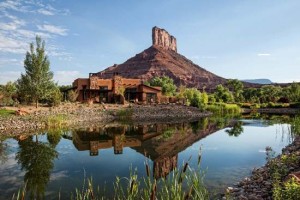 If you’re wanting luxury amidst the ruggedness, Gateway Canyons is a high-end resort that offers mountain biking, horseback riding, hiking, climbing, fishing and rafting. Go to www.gatewaycanyons.com or call 866-761-4733 for reservations. If backpacking in rugged canyons isn’t your thing, drive the 133-mile Scenic and Historic Byway, which winds through red sandstone in the stunning Unaweep Canyon. Unaweep knifes through the soft red sandstone of the Uncompahgre Plateau. Treat yourself to cliffs towering a thousand feet overhead, surging streams, and endless blue skies.

In Gateway, get your backcountry adventure on, or just take off in a convertible with your best friend and drive to the edge of the canyon—Thelma and Louise style. Just don’t drive into the abyss. There’s so much more of Colorado left to explore!

View all posts by Anne Tinkham →