Inspired locations: Visit Some of Hollywood’s Most Memorable Settings 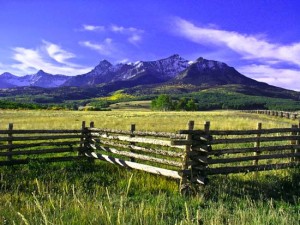 The Dallas Divide
rises above Last Dollar Road near Ouray.

It’s no secret that Colorado is among the most visually stunning places on the planet. Visitors the world over flock here to commune with the jagged snowy peaks, high alpine lakes, golden aspen groves, carved canyons, and rushing rivers. But did you know that Colorado boasts a glitzy legacy as a set for Hollywood’s silver screen? Thousands of films have been shot in the Rocky Mountains, including classics such as True Grit, Butch Cassidy and the Sundance Kid, Thelma and Louise and more recently, Mr. and Mrs. Smith.

Without a doubt, the dramatic scenery has long captured the imaginations of film directors, serving as a backdrop for gritty westerns and road trip dramas. This summer, visit the A-list towns of Ridgway, Durango, Glenwood Springs, and Gateway, and reimagine yourself as a rough and tumble cowboy, an outlaw heisting a train, a fugitive locked in a car chase or a pursued assassin scaling a canyon wall.

In the movie, True Grit (1969), Mattie Ross enlists the help of a crusty U.S. marshal to track down the man who murdered her father. She taps a tough old marshal, “Rooster” Cogburn, played by John Wayne ,because he has grit and a reputation of getting the job done.

Vestiges of the True Grit set remain in Durango. The firehouse survives as an artist studio, and the livery stable became the post office. The Fort Smith Saloon is now a store on Lena Street. You can find the paddy wagon from the movie in Heritage Park on the southwest corner of Highways 550 and 62.

The Ridgway Chamber offers a one-hour True Grit movie walking tour from May through October. For reservations, call 970-626-5181. Or if you’re a hard-core True Grit fan, do a self-guided tour.

While in Ridgway, eat like a cowboy at the John Wayne-themed True Grit Café. Their menu features mouth-watering Tex-Mex, juicy steaks, house-made meatloaf, and the best dang chicken-fried steak this side of the Rockies. They also serve tempura-battered mahi-mahi, which isn’t very cowboy; sounds like the wrangler traded in his steed for a surfboard. If you don’t eat like a cowboy, don’t despair; they offer veggie and gluten-free options. While you’re there, check out the actor and movie memorabilia. To quote the friendly folks at the True Grit Cafe, “Y’all come on in and tie on the feed bag and enjoy the Grit!”

Get your equine fix at Action Adventure Trail Rides ten miles away in Montrose. This outfitter offers rides for every level: the 1-hour Wrangler Ride for novice and youth riders, the Buckaroo Ride—a 2-hour jaunt into the wilderness. Then there’s the 4-hour Ranch Hand Ride, which they say is not for beginners or the faint of heart. In other words, vertigo-inducing sheer drop-offs on rugged, rocky, narrow trails. If you go, you had better hope your horse is sure-footed or sip enough whisky from your flask so you don’t care.

You can book your ride online, even though the folks at Action Adventure admit that computers and the internet are a cowboy’s worst nightmare. But for a busy weekend wrangler like you, booking online will come in handy. For more info, go to http://ride.actionadventures.net/ or call 970-325-3006.

If horses aren’t your thing (because we all know someone who suffers from equinophobia), take in the vistas while driving the Last Dollar Road. The origin of the name is a mystery. Perhaps a gold rusher spent his last dollar to hitch a ride to Cali with a wagoneer. On this drive, you can see the remains of Mattie Ross’ ranch, where John Wayne jumped his horse over the fence at the end of True Grit. The drive takes you from the Dallas Divide, over the west end of the Sneffles (not sniffles) Range, through gorgeous aspen forests with unobstructed views of the Sneffels Mountain Range and Wilson Peak to Telluride. Don’t attempt the drive unless your car has decent clearance. In fact, an SUV is your best bet.

From Ridgway: Take Highway 62 west until you see a sign for Last Dollar Road. Turn left off the highway and continue left when you hit a fork in the road (a right turn will take you to the town of Sawpit).

If you’re not the naked hot springs camping kind (because there are always a few exuberant nudist colony types who ruin it for everyone), book a room at the Chipeta Sun Lodge and Spa. Fringed by the majestic San Juan Mountain Range, this Southwestern-inspired boutique lodge blends cozy accommodations and wellness touches with bed and breakfast charm. The adobe-style resort and spa provides rustic boutique lodging with private hot tubs, romantic fireplaces & patios, solar heated hot pools, and spa. To make reservations, go to reservations@chipeta.com. If they had a hitching post, the Duke would’ve loved parking his horse and kicking his boots off here after a long day of ramblin’ and wranglin’.

View all posts by Anne Tinkham →