I’m typing this a day after an organized group of White Nationalists, white supremacists, neo nazis and Confederacy sympathizers marched on Virginia to protest the removal of a statue of General Robert E. Lee. Tiki-torch-bearing, pleated-khaki-wearing, goose-stepping, jackbooted neo-Nazis in fascist regalia out in the open, exercising their First Amendment rights. Oh, and one of them plowed his car into a group of counterprotestors from behind in a cowardly act that killed at least one and injured 19 others. 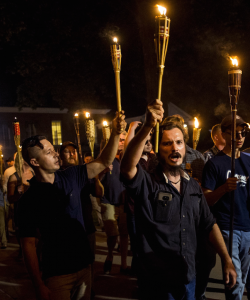 If you’ve been paying attention, this kind of thing should come as a surprise to no one. It’s been a surge that started as a groundswell under the Trump presidential campaign, and you can put it all on a timeline. His refusal to disavow support from human detritus and former Klan Grand Wizard David Duke (bit.ly/TrumpDuke). Disgusting commentary on Mexican immigrants (bit.ly/TrumpMexicans). Tweeting imagery of Hillary Clinton superimposed over a Star of David and a pile of money (bit.ly/TrumpStarOfDavid). Multiple retweets of accounts held by white supremacists (bit.ly/TrumpRetweetWhitePower). Trump chose white nationalist William Johnson as a Republican primary delegate in California (bit.ly/TrumpWhitePower5). And on. And on.

Is this what Making America Great Again is all about? The emboldening of the disenfranchised fringe white-right who bears swastika insignias and commits acts of terrorism on American citizens?

No, we can’t lay the blame of the existence of this human garbage pile at the feet of the Commander-in-chief. They existed before he got here. But we can hold him accountable for his consorting with them. For his encouragement of them. For his refusal to disavow them. For this statement, equivocating them with everyone who disagrees with them: “We condemn in the strongest possible terms this egregious display of hatred, bigotry and violence on many sides, on many sides,” said Trump. “It’s been going on for a long time in our country. Not Donald Trump. Not Barack Obama. It’s been going on for a long, long time.”

Many sides? No. There’s the side wearing the swastikas. And everyone else, Mr. President. Even our own resident GOP Senator Cory Gardner, agreed that what happened in Virginia needed a firmer rebuking. His tweet: “Mr. President – we must call evil by its name. These were white supremacists and this was domestic terrorism.”

For the last year, pundits on the left — including me — have warned us all about this administration and its moral flexibility, especially where the fringe white-power alt. right is concerned. We’ve been decrying the racist dog whistling for a year.

But this isn’t just dog-whistling any more. Dog-whistling implies that only the dogs can hear the whistles. The thing is, we can all hear them now.

And we can hold each other accountable for ignoring the sound.