Colorado has a new outdoor live music venue — the only one in the Denver city limits, and it’s an incredible gem. No one is more responsible for bringing Levitt Pavilion to life than Chris Zacher, former president of the famed City Park Jazz Board of Directors.

Zacher was recognized by the Denver Business Journal as one of Denver’s “Forty Under 40” for his commitment and leadership to Denver’s non-profit community; since 2012, he’s led Denver’s effort to create the new Levitt Pavilion at Ruby Hill Park. Jolon Clark, Denver City Councilman District 7 summed it up when he said, “Chris Zacher’s leadership has been critical to getting this unique public/private partnership off the ground, and his continued enthusiasm and energy will be critical to its success. We will have a unique cultural asset with the Levitt Pavilion at Ruby Hill, but we’ll have it only because we a already have a unique cultural asset in Chris Zacher.” Here, Chris talks about how massive an undertaking the project was, what it means for local musicians, and just how important a crown jewel it is for the Ruby Hill Park community. 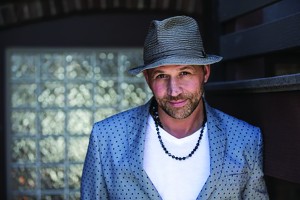 French Davis: Give us a rundown of the history of Levitt Denver — how this whole thing got started and the journey to where you are today.?

Chris Zacher: The idea of a performance space in this park was a dream in the 1950s when the park was first created. The bowl we are in received its saddle shape in anticipation that one day an amphitheater would sit at the bottom of the hill. Fast forward to 2009, Denver Parks and Recreation is working on a master plan for Ruby Hill Park and the idea surfaces again. At the same time, a gentleman by the name of Gordon Robertson had just accepted a position with Parks and Rec to lead lead park planning and construction. Gordon moved here from Arlington, Texas where they had just began construction on a Levitt. Knowing that the City would need additional funding to build something, and based on the non-profit model, a connection was made with the Levitt Foundation. The City and the Levitt Foundation spent the next three years working on a feasibility study. In July of 2012, they decided to move forward and tapped me to lead the charge. I spent the next five years creating an independent non-profit, working through an operational agreement with the City for the facility, raising money, building awareness, and assisting in the design and construction of the facility.

FD: What makes Levitt different than the other outdoor venues in Colorado?

CZ: We can start by pointing out that there is not another outdoor music facility in Denver proper. I had never really thought about this before taking on this project. We live in a market where spending time outside is what everyone does. As a city and state, we brag about the sheer number of days of sunshine and amazing the weather we have and how much time we all spend in the outdoors. We have a robust music scene and two large outdoor music festivals that celebrate local music. Yet until July 20, 2017, we did not have an outdoor music venue anywhere close to our City center. That just seems crazy to me.

Levitt is different in many ways but any music venue can say that. What really sets us apart is that we are a mission-driven non-profit working to increase access to the arts for patrons and artists. We produce 50 FREE high-quality concerts every summer. We spend countless hours during the off season scouting talent and tracking bands. This place was built to launch careers. It’s much easier to book a known commodity and sell tickets.

CZ: Hopefully it’s a game changer for them. I can say without a doubt that this venue was designed with the artist in mind. In 2014 we held an open forum discussion at The Oriental Theater to talk to musicians and industry professionals. We wanted their ideas on what they would do if they were building a venue. We took those ideas back to the architect, worked through them, and incorporated as many of those ideas as possible into the design. Most of these touches are not something the general public will notice, but for musicians, riggers, sound and lighting techs, etc. they notice them. FD: How have the first couple of shows gone? What are some of the things you’re hearing visitors say? Performers? Ruby Hill neighborhood residents?

For more information on the free concert series, the admission-based series, and park rules and park