Nicholas Bernhard, Yellow Scene’s History columnist, has a new book coming out! Check out the press release below and be sure to pick up a copy for the holidays. 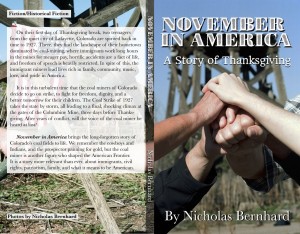 Lafayette, Colorado – October 25, 2017 – This November marks the 90th anniversary of the Columbine
Mine Massacre. The killings of six unarmed coal miners, on strike for fair wages and improved safety,
at a mine north of Lafayette, was one of the most important events in state history. Over the decades,
the story of the Columbine Mine, and its significance, has been all but forgotten. Few people even know
that east Boulder County was home to nearly 150 coal mines, from the 1850s, to the 1970s.

Now, one author is hoping to change that, by bringing the story of Colorado’s coal fields to life.

November in America is a novella by Nicholas Bernhard, about two modern-day teens from
Lafayette who are spirited back in time to October, 1927. There, they find a landscape dominated by
coal, where miners work for meager pay, horrific accidents are a fact of life, and freedom of speech is
heavily restricted. In this turbulent climate, the miners decide to go on strike, fighting for freedom,
dignity, and a better tomorrow for their children. The strike takes the state by storm, all leading to the
shocking climax at the gates of the Columbine Mine.

The book is written by local writer and filmmaker Nicholas Bernhard. Mr. Bernhard directed
the acclaimed documentary Blackstone’s Equation: The Tim Masters Story, about Colorado’s most notorious
wrongful conviction. Since 2017, he has written the column Tales of the Northern Coal Field for Yellow
Scene Magazine.

On Saturday, November 4th, Nicholas Bernhard will be reading a chapter from November in
America at the Lafayette Public Library, during a presentation by the Lafayette Historical Society. The
presentation will begin at 10:30 AM. More book readings in the area will be forthcoming.