The Ascent of AscenDance 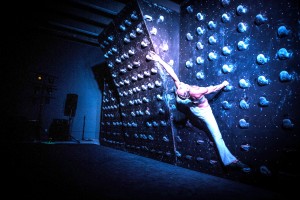 Boulder-local Isabel von Rittberg is both a dancer and a rock climber, and she remembers the precise moment, during a drive to Montana to visit her Grandmother, that she first thought of combining the two disciplines. “I was driving through the Virgin River Gorge in Utah, listening to music and looking at the towering rock walls, and I had a vision so clear and so strong that there was no way I could have ignored it,” she says. “I told my Grandma, ‘I’m going to build a climbing wall and dance on it.’”

In the 11-ish years since then, von Rittberg has turned that vision into reality with AscenDance, the first rock-climbing-inspired dance company. The troupe is taking the Front Range by storm and recently performed at Boulder’s annual TedX festival. “People have called us ballet on a rock climbing wall,” von Rittberg explains. It’s choreographed rock climbing; kind of like synchronized swimming.”

Of course there are differences between dancing on a wall and dancing on the floor, which is part of what makes watching an AscenDance show so scintillating. “You can land anywhere on the floor when you’re dancing and you’ll be ok. On a climbing wall, you have to be on the holds. What we have been able to develop, is to integrate movements from different dance styles—like pirouette and arabesque. We really apply the vocab of dance from different disciplines onto the climbing wall.”

Von Rittberg grew up in Germany and started dancing at a young age. She did a lot of ballet, but was always intrigued by other styles. “I really love hip hop,” she says, “and got really into salsa,” during college—which is also when she discovered rock climbing.

She became obsessed and dropped all her other hobbies to focus on climbing. While living in Santiago, Chile, for a year during this period, von Rittberg started contemplating the similarities between dance and climbing: “I thought a lot about how my love for climbing came from music and dance; the movement, the balance, the technique. They’re both very detail-oriented pursuits. A millimeter this way or that way, or how you grab a hold, or how you shift your weight—it’s very relevant for dance, too.”

So after her epiphany on the drive to Montana about literally dancing on a climbing wall, she devoted all her energies to this new goal. She moved to the Bay Area, built a small bouldering wall in a warehouse with the help of friends, and recruited members to join her new dance company. “We took baby steps. Our first performance was in front of people just sitting on a couch five feet away from us,” she remembers. “It was very intimate.”

From there, AscenDance kept practicing and experimenting. They attracted attention and began performing in different places around the Bay Area with the help of a moveable and portable wall.

2010 was their big year. They appeared on America’s Got Talent (AGT) and made it all the way to the semi-finals. Despite encouraging audience reactions, von Rittberg says, “What I walked away with is that it’s really important to stay authentic in Hollywood. Everyone wants you to do this or say that because that’s what’s going to sell. As an artist you feel like you can’t be completely free.” 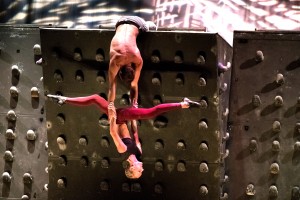 Not long after AGT, von Rittberg moved to Boulder for a fresh start. She fell in love with the city on a 2009 visit and, between the great community and access to limitless rock climbing, it struck her as a good place to reinvent AscenDance. From 2012 to 2014, Ascen- Dance’s headquarters were in a warehouse space on Arapahoe. New city, new space, new dancers, and new horizons.

AscenDance’s performance at TedX Boulder was a big deal for von Rittberg and her dancers. “We all got super focused,” she says. “It was really magical. I ended up using spoken words at the beginning of the piece. The first sentence was, ‘I dream of a world where we dance on the walls that divide us.’ It was about holding onto hope and love. See their performance in the video, linked here.

“I finished the piece with the words, ‘My wounds are deep/ But I keep loving/ The earth is hurt but I keep dreaming/ Because we create the world we live in/ This is the new world.’ The idea being that we’re responsible for what’s going on. The piece was about climate change—including social climate—and becoming aware of little things we can do.”

With TedX in the rearview, AscenDance is hoping to do big things in the next couple years. Von Rittberg wants to take her show on the road. “I’d like to build out a semi truck that has a 24-foot long bed—exactly the length of the climbing wall we dance on—and tour the country. Like the movie Chef but with dancing and climbing.”

It’s a vision that will require some serious funding and a lot of work, but von Rittberg thinks it will all be worth it: “It would be such a unique way to bring the arts to places where people don’t have the money, exposure or knowledge of what’s out there.” It’ll be hard, for sure, but just as AscenDance overcomes “gravity with grace, fluidity and technique,” von Rittberg wants to see it through: “I’m a dreamer,” she says.