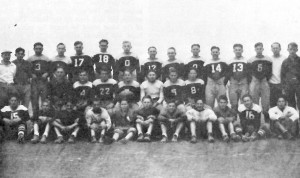 On December 10th, 1937, Lafayette High School won the state football championship.
This December marks the 80th anniversary of their win, the most celebrated athletic
achievement in Lafayette history.

The high school football team was a point of pride in Lafayette, as it faced the hardships of the Great Depression, a declining coal industry, and the deadly Monarch Mine disaster the year before. High-schooler Chuck Waneka, who played on the championship team, recalled practicing football with work shoes held together by belts, later making his own shoes.

The demands placed on placed on the high school football team often clashed with the demands of farming in Lafayette. Many high-schoolers in Lafayette were expected to work on the family farm whenever they weren’t in school. In 1935, Lafayette High School was in a playoff game, but the team’s fullback, Joe Distel, hadn’t finished his tractor work. His teammates drove into the field, pulled him off the tractor, and put him into the game at second quarter. Lafayette won 33-0. Distel’s teammates drove him back to the farm, where he finished his tractor work. Distel’s father never knew he was gone.

Lafayette’s 1937 season began with embarrassing losses, including two games where they were shut out. A winning streak for the rest of the season took Lafayette into the state championship: an away-game at Burlington. At least 200 people took the train to Burlington for the game, and many others drove the 180 miles to watch the game. 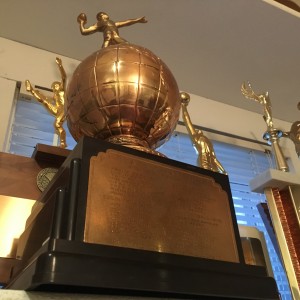 In spite of two players out with injuries, including their quarterback, Lafayette beat Burlington 13-7. Lafayette fans stormed the field, fighting Burlington fans to tear down the goalposts, and carrying them to the train station.

The Lafayette football team was greeted by a crowd of 1,500 people at Denver’s Union Station, three-quarters of the entire town. There was a marching band, and a banquet feast presented by the Lions Club. They returned to the state championship the following year, losing to Limon 6-0.

Lafayette High School won a second state championship in 1965. Their longtime rival, the Louisville Pirates, won once, in 1948. In 1972, both schools closed, merging into Centaurus High School. Centaurus has won championships in girls’ basketball, boy’s cross country, and wrestling, but has yet to win one for football.