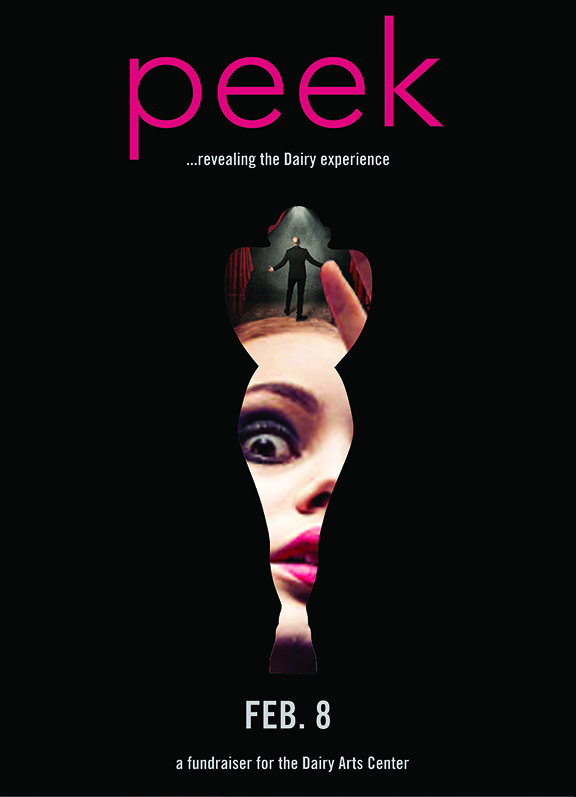 As fans of the arts, we couldn’t be more excited when local arts gets innovative.

The Dairy Center for the Arts is having a huge 2018 fundraiser on February 8th, but this won’t be any sit back, clap, and cough up a few bucks fundraiser. No. DCA is turning their venue into a fully interactive space for this special event, called “PEEK: revealing the Dairy experience.”

James Goldmill of the DAC marketing team tells us, “It’s pretty ambitious. We’ve never done anything like it before.” And what’s so ambitious? What is happening? “Basically people [this means you] get put in groups of 70 and they rotate through all of our performance spaces, experiencing every discipline of the arts in a single evening.” Every. Discipline. Of Art. In a Single. Evening. Color us impressed.

To add to the splendor and fun, Frequent Flyers Aerial Dance is performing with Spinphony (think of them as Charlie’s Angels on Strings), the experimental films of Stacey Steers will be shown, and more. They’re pulling out all the stops because this is the first big fundraiser with their new Executive Director, Melissa Fathman. What better time to make a splash, and collect a few bucks to shower our area in amazing arts?

The four performances / vignettes planned for PEEK are:
1. Aerial Dance & Music – Frequent Flyers Aerial Dance and Spinphony (the Charlie’s Angels of strings) have paired up for an electrifying performance.
2. Visual Arts & Cinema – Selections of the experimental films of celebrated artist and filmmaker Stacey Steers, will be screened.
3. Comedy – Boulder native and nationally touring comedian John “Hippieman” Novosad, will perform.
4. Theatre – Maya Productions & Goddess Here productions will be performing selections from their latest production “How To Screw Up Your Life!”
There’s a method to the madness, too. James Goldmill tells us, “Frequent Flyers Aerial Dance and the Dairy have a great relationship and we admire what they do – so that’s how they came up. And when the idea of seeing them paired with Spinphony came up, it was a no-brainer. Stacey Steers is someone we’ve always wanted to have at the Dairy, and again – we have a deep admiration for her work and we’re very excited that she’s involved. The Theatre component was one that made sense because this event is happening during the middle of the production they’ll be performing excerpts from. And as far as Hippieman goes, he’s a long-time friend of the Dairy – and he’s hilarious! There’s no better person to represent our stand up comedy program.”

Here at YS Magazine, we’re excited to see the arts reaching new heights in our community, expanding and exploring concept, and making engagement with the arts so dynamic. This makes us want to bust out our high school art supplies. They must be in a cabinet around here somewhere…

Plan to take away from this what you can. The arts fill us in ways most things never could. “We want people to leave that night feeling several things,” Goldmill tells us. “We want them to feel like they experienced a whirlwind of every discipline of the arts in a single evening. We want them to know that they’ve gotten a true “Peek” into the Dairy and what we do here and how passionate we are about what we do. Since this is our largest fundraiser of 2018 that supports our general operating, we of course want people to donate to the Dairy that night and to also leave that evening feeling really good about supporting the Dairy and everything that we do – because the Dairy is an incredible place not only for the current patrons and artists and performers but also for Boulder at large.”

We’ll leave you with the event teaser video. It’s subtle but effective. More than enough to make us want to show up for the magic.