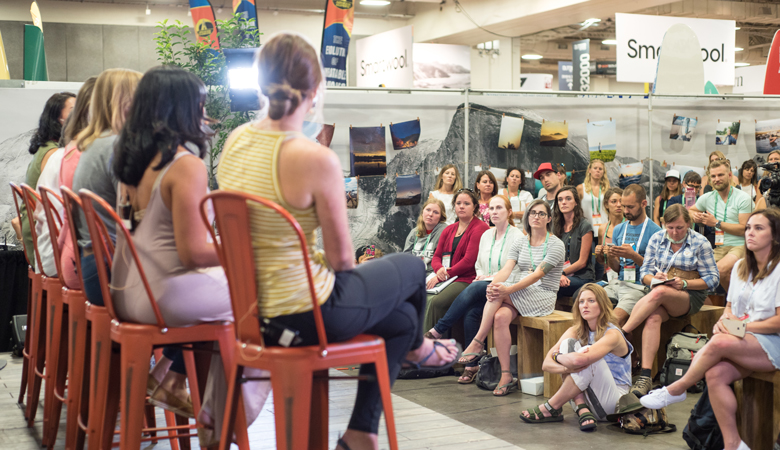 For a lot of us, Outdoor Retailer is something we only see from the outside. Or from the social media posts of friends working in the industry. The shows are full of influencers, brands, manufacturers, and even famous pets. (The Insta-illustrious wolfdog, Loki, graced this year’s Snow Show with his presence. Who might we glimpse at the Summer Market?)

Even at 85,000 attendees, they are somewhat exclusive events. Business-to-business only, a way for like-minded professionals to align business strategies, forge partnerships and collaborations, and forge ahead into the future of the outdoor scene to keep us consumers guessing. But this year, and for the foreseeable future, they’re doing it in our very own backyard.

What Is Outdoor Retailer?

After 22 years of calling Salt Lake City home (and Las Vegas prior), Outdoor Retailer (OR) opened its doors in Denver for the first time in January of this year and will again in July for its Summer Market. Marisa Nicholson, OR Show Director, says in an email interview that leaving Salt Lake City was “bittersweet,” but that Denver hit multiple criteria for their conventions: “There’s a lot that goes on behind the scenes and are important to the logistics of putting on a show, but for the outdoor industry, culture is also extremely important, and we listen very carefully to our retailers, brands and partners about what’s important to them. Denver and Colorado was the best balance of both worlds.”

Outdoor Retailer shows have multiple roles: beyond being a perfect venue to see and be seen by famous dogs, athletes, and influencers, it’s an economic ecosystem for the industry to thrive. These shows are incredibly important to the industry’s health, providing a place for brands to showcase their innovations to retailers, collaborate with other organizations, and get up to speed on industry happenings.

As stated, because this is the convention’s primary function, the event isn’t open to the public. However, Nicholson shared that, “because the outdoor enthusiast population in Denver is so high, we are working on more events that allow the public to get a glimpse of what’s happening in outdoor.” At the Snow Show, this public involvement took the form of open panel discussions, a film showing at the Bellco, and a Red Rocks concert. According to Nicholson, they’re still finalizing some of these events, but based on January’s offerings, they promise to be an exciting way to engage with the outdoor industry.

If you’ve lived in Colorado for more than a few hours you know that the outdoors are intrinsic to life in Colorado. As Alex Boian, VP of government affairs for the Outdoor Industry Association (OIA), put it, “Colorado is basically synonymous with outdoor recreation.” In fact, OIA has quantified that 71% of the state’s population is participating in outdoor recreation, and since supporting that participation is one of OIA’s main goals, they’re very happy about it. “It’s a huge and overwhelming majority,” he said. “So it’s very exciting.”

Dana Watts, the executive director of the Boulder nonprofit, Leave No Trace Center for Outdoor Ethics, believes part of OR’s reasoning for moving here reflects the fact that our state is an epicenter for outdoor activity. “Colorado really has something for everyone when it comes to the outdoors, and it’s not only something, but it’s world class something. More 14,000 foot peaks than any other state, world class river corridors, national parks, state parks…. There are few states that offer as much as Colorado does.”

Because of these high participation rates, Boian claims that the outdoor industry is “absolutely critical to Colorado’s economic health.” The OIA has found that, thanks to high participation rates, outdoor recreation generates more than $28 billion in consumer spending in Colorado alone, creating 229,000 jobs, $9.7 billion in wages and salaries, and $2 billion in state and local tax revenue. “It is one of Colorado’s largest industries,” explained Boian, “And with the show moving here, we expect that to only grow.”

The economic impact of the show’s move to our state cannot be understated. OR brought Salt Lake $40 million in tourism each year, and Nicholson and her team anticipate even bigger impacts in Colorado. They estimate an annual economic reach of $110 million from their three events—Outdoor Retailer + Snow Show, Outdoor Retailer Summer Market, and Outdoor Retailer Winter Market—a whopping financial win for the state. The shows also facilitates the growth of over 2,100 Colorado exhibitors who regularly participate, and creates a venue where BOCO brands like La Sportiva, Nite Ize, Kelty, and Scarpa can rub elbows with retailers and other like-minded companies.

Courtesy of the Leave No Trace Center for Outdoor Ethics

Outdoor Retailer’s move to Denver excites local exhibitors for multiple reasons, but for all of them, it represents a significant financial opportunity. Leave No Trace has been exhibiting at OR for 24 years, and Watts explained that it is the biggest event in their yearly cycle: “It’s definitely a significant event for us in that about 80% or so of our funding as a non-profit comes from the outdoor industry,” said Watts. “For nonprofits, [OR is] really about showcasing what our long-term vision is and our programs and how other companies are actively participating in the effort.”

Watts described one of Leave No Trace’s current and future projects, a “very lofty initiative” to help 16 national “hot spots” recover from being “loved to death” by visitors. “It’s a great opportunity for people to get involved,” she said. “We have service projects associated with many of our hot spot areas.” Leave No Trace will showcase this initiative at the show in addition to hosting their normal fundraisers, “mini service projects,” and awareness events. Watts also explained that the location change will have a positive impact on their ability to showcase their impact. “We can actually invite [partners] to different events that we have in Colorado,” she shared. “It makes our job that much easier because it’s here in our backyard.”

Another local exhibitor, the outdoor gear company Sea to Summit, will also benefit from the event’s proximity. Shelly Dunbar, co-owner of the company, said laughingly, “Having the show in Denver is excellent for us and our staff because we mostly all get to sleep in our own beds.” The team will also be showing off a slew of new products, like down sleeping bags and ultra-light mats, for spring 2019 at the show. “We actually have quite a few things,” Dunbar said excitedly. “It’s one of the biggest launch years in our history.” 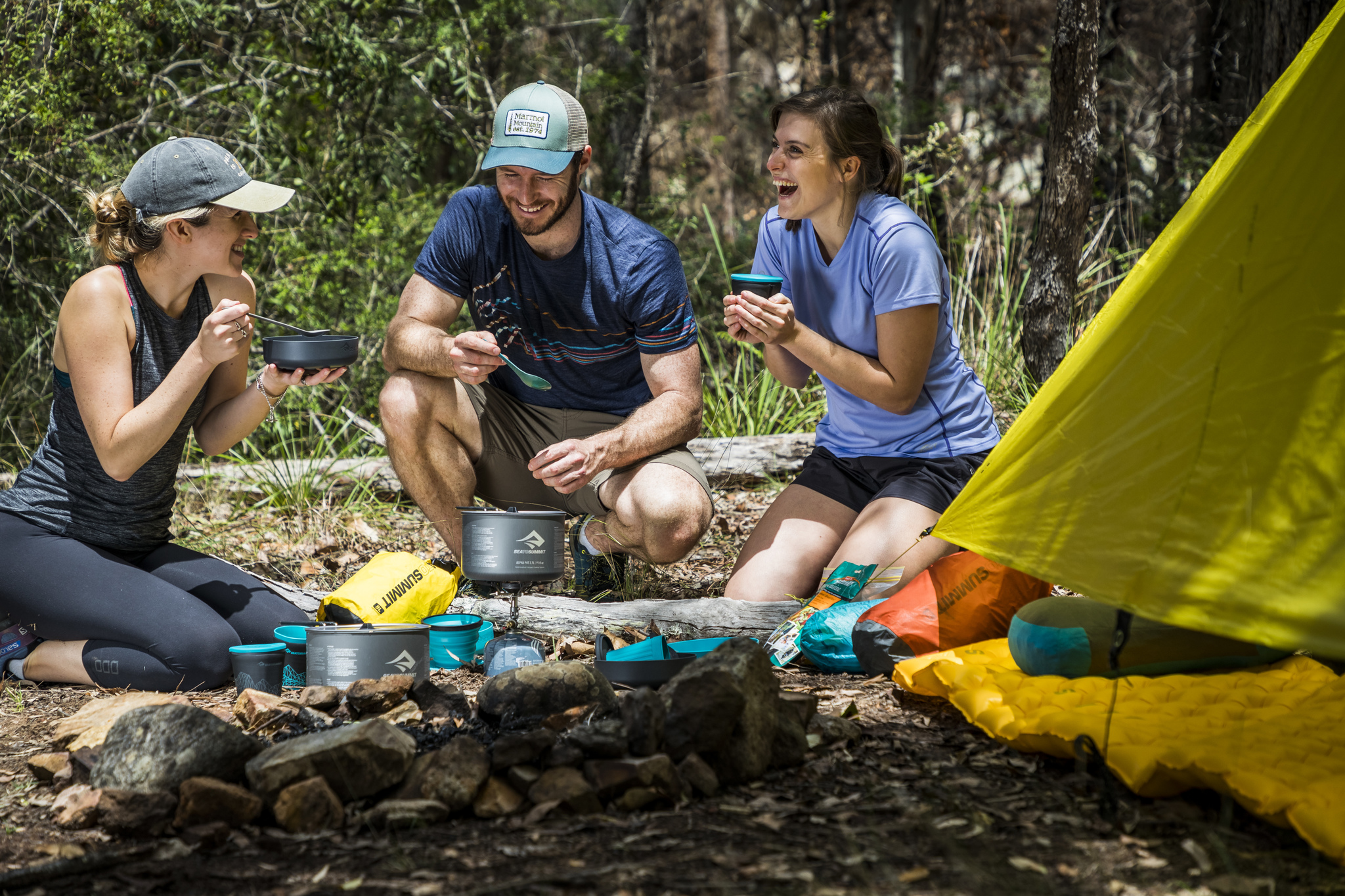 Courtesy of Sea to Summit

But for both brands, and for many others involved, the move represents something hugely significant on a social level, as an unexpected tool against policies that don’t support environmental conservation. The move followed Utah legislators pushing policies to diminish the size of Bear Ears National Monument by 85%, a debacle that sparked significant debate about the security of public lands and mobilized many outdoor enthusiasts to come to the defense of our parks. Dunbar sees the change as a positive way to throw the industry’s weight around when it comes to similar issues: “We’ve had the chance with the move out of Utah to really make a bold statement in terms of [saying], ‘This is how big of an industry we are. We are economically important. So hey, you guys in Washington, or Utah, or Colorado, you need to pay attention to us.’”

Despite what OR called the “serendipitous” coincidence of these events, the group’s statements have led with an “industry-first” approach that have kept their reasons slightly ambiguous. Nicholson says, “Our job is to put on a phenomenal trade show that meets the needs of our industry, and that is where we focus our energy.” In a statement last year about their proposal choice, OR explained that their decision to choose Denver came down to both making a logistically sound choice for their events, but also because OR “evaluated the alignment of [the] industry values” against each location and identified Colorado as being “passionate about protecting and nurturing outdoor recreation, which is critical to the growth of our industry.”

Ultimately, it’s impossible to separate this industry’s needs from environmental issues because its continuity is tied to that of our outdoor landscapes. Outdoor Retailer’s split with Utah may have been based on multiple factors, but the outdoor industry seems unified in its mission to bestow their benefits on a state that is invested in preserving the future of our natural spaces. Boian claimed that “the catalytic event was the industry’s disagreement with policy makers in the state of Ut

ah over how they approached public land issues and that led to a break, a division—we could no longer viably host our event in Salt Lake City.” The board and the organization’s leaders “really did look at how policy makers of the specific states—and in this case Colorado—how they approach public lands issues and how they embrace the outdoor economy.”

The shows have facets that reflect advocacy directly, as with Leave No Trace’s participation. Boian will also be involved in this aspect of the Summer Market, and claimed that education around sustainability and public policy issues will be well-represented at the show. The Summer Market will be accompanied by public luncheons with focuses on sustainable business development, advocacy as a brand, and government affairs surrounding water conservation and stewardship as well as climate change. They’re also holding a panel on women leadership in sports and the outdoor industry and are working to have the primary party gubernatorial candidates attend a forum to discuss today’s outdoor recreation issues.

Watts recognizes that issues like stewardship and advocacy have always been important to some in the industry, but she identifies a recent upward trend, perhaps given the current political climate and the fact that conscious consumerism is increasingly mainstream: “I think people are just more aware of the issues and becoming more activated. Both individuals and companies.”

Boian, on the other hand, stressed the existence of the “The industry has definitely had more visibility because of the last year,” he stated. “But this has always been central to the industry—these values of conservation, stewardship, access to land and water.” Dunbar agrees that advocacy has always been inherent in the industry: “I think it’s always been present,” she said. “It’s really near and dear to us personally, and that’s why we’re incorporating it into our businesses.”

Courtesy of Sea to Summit

OR’s move to Denver is set to last at least five years, and they hope it will be a long-term partnership. It definitely feels something like a victory, or at least validation of our forward-thinking values, a positive sign that maybe we’re doing something right. But we should keep Salt Lake in mind as elections near and environmental policies threaten change, deregulation, or

development in our treasured state. An editorial in the Salt Lake Tribune following Outdoor Retailer’s announcement of their move derided Utah’s political leaders and cited their values, “as shown in the stubborn and pointless fight against a Bear Ears National Monument,” as a reason for the convention’s exit, but it also identified issues beyond public lands that could impact their outdoor industry in the future:

“The damage may not be over,” the Tribune writes. “What does Utah’s sports-equipment industry have to look forward to? What are Ogden-based companies supposed to do when their congressman – Bishop – refuses to acknowledge that fossil-fuel consumption reduces the snowpack upon which their products glide?… This isn’t about $40 million. It’s about who we are and where we are headed.”

Despite gaining recognition from the outdoor industry, we need to reflect on our own trajectory and ensure we’re helping to shape the state and world we want. We need to actively support the measures needed to keep our policies moving forward, not only for the benefit of an important segment of our economy, but to maintain the very landscape and environment that make our Colorado lifestyle as wonderful as it is.