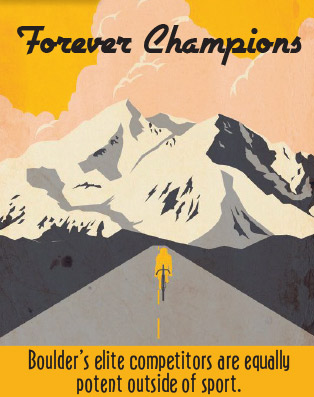 Boulder is a magnet for world-class athletes, but sports legends do not simply vanish upon leaving their field of play. Our community’s victory is retaining these champions in our midst. This is the story of those Boulder County athletes that chose to become champions…after sports.

“Did you ever imagine you could have a greater impact than your racing results?” I asked Davis Phinney, a two-time Tour de France stage winner and Olympic medalist. Phinney’s words come slowly — almost two decades ago, seven years after his retirement from professional cycling, he was diagnosed with early-onset Parkinson’s. When he speaks, though, his eyes are bright, his words articulate, his thoughts poignant. His demeanor reveals the self-effacing confidence of one who devoted half a lifetime to honing himself as a competitor before learning that he would spend the rest of his life redefining “victory” altogether.

This time, however, Phinney answers with immediacy: “Never,” says the man with more victories than any other cyclist in American history. He paused, slowly, carefully, sipping iced tea, “I was too in it.” The Davis Phinney Foundation, co-founded with wife and Olympic champion cyclist Connie Carpenter in 2004, directed nearly two million dollars last year alone toward increasing quality of life for those with Parkinson’s. “I did not set out with the intention of saving the world,” he says, reminiscing about the training camps he and Carpenter started as their initial post-racing-life venture. “I fell into it later, after my diagnosis.”

Decades ago, Phinney led Boulder’s rise to cycling Mecca status. Now, his foundation is expanding reality for his Parkinson’s community. “It rings quite true,” says Davis Phinney Foundation ambassador Rich Wildau. “When I hear others comment, ‘if you have to have Parkinson’s, Boulder, Colorado is the best place to have it.’” The Foundation’s work is now what Phinney’s name is known for. “In a sense it couldn’t make me happier,” he says. “I’d hate to sustain myself on work I did half-a-lifetime ago.”

Unwavering focus and appetite for challenge are characteristics that bleed unbidden into civilian life. “Whatever I was doing I was so laser focused on it that I didn’t step back,” explains Phinney. “As a bike racer I was obsessed with winning and now as a person with Parkinson’s I’m obsessed with winning, but in a much different way.”

Like Phinney, Roger Briggs grew up in Boulder. He was rock climbing by twelve: “We were hanging out on Flagstaff, and we would see people rappelling and ask them questions. It just seemed inevitable.” By sixteen, Briggs climbed Longs Peak’s Diamond, an ascent he has since made more than one hundred times. He was one of the pioneers of free climbing — part of a then-revolutionary class that jettisoned the pitons used to cut into rock in favor of just hands and feet — the climbing style that is now the standard.

His tone is casual and intelligent — as befits a former high school physics teacher —imparting concepts explained a thousand times and intimately understood. “It’s just staggering,” Briggs says, describing the popularity of climbing. When pressed, Briggs will talk about his storied reputation and list of first ascents, but will quickly pivot back to his greatest accomplishment: “this stewardship.”

Briggs’ extraordinary acts have often gone unheralded – even in his heyday as an athlete. In 2017, BCC quietly built nearly five thousand feet of retaining walls and hundreds of steps, paving a path for an ever-increasing supply of eager climbers.

Mike Friedman is still honing that confidence — his business cards read, “2008 Olympian, last place”, a tag that betrays understanding of the significance of his accomplishments but veils them with self-deprecation. A former cycling national champion, Friedman founded Pedaling Minds in 2016, a non-profit devoted to teaching kids how to ride bikes safely — with a focus on control, safety, and confidence — explaining the science, math, and engineering that make those bicycles work.

The words flow quickly as Friedman describes his passion for Pedaling Minds. “It made me feel good and gave me a sense of belonging,” he says of his own cycling career. “I could see progress quickly.” He seeks the same emotional boon for his students: “The change that you see … not just learning how to ride a bicycle but the emotional growth, the confidence, the self-belief, the happiness, it’s an amazing thing.”

“He’s the bike whisperer,” six-year-old Evynne Ondatje’s parents said as their pink-sunglassed daughter practiced nearby. This was Evynne’s second lesson. Before the first, she got off to turn corners. Now she streaks directly toward Friedman before he yells “hard stop!” and she grabs a fistful of brakes. “She trusts him more than she trusts us.”

It actually took Ironman Wisconsin winner Nicole DeBoom moving beyond sport to find her focal point. “I got as much fulfillment out of not winning races as winning them,” she says. “I knew I was an all-in kind of person, so I might someday be willing to give that kind of sacrifice to something else. I just didn’t know what that would be until [Skirt Sports]”.

Skirt Sports is a clothing store DeBoom founded in 2004 to empower active women with something better than poorly-fitting men’s running shorts. Entering, you are blasted with bright colors. Photographed models are of all ages, sizes and — importantly, in this town — all levels of fitness. It’s a place of community, something DeBoom found missing during her individual-sport competitive career.

Each of these champion athlete-entrepreneurs exuded intuition and certainty of purpose, whether talking of past wins or current ventures. “I’ve always kind of known the next steps to take,” Briggs said, describing an endemic faith similar to that of one seeking the next handhold on a slick rock wall. “Then suddenly you look back, and it’s a career.”

Ian Adamson, a ten-time adventure race world champion and X-games medalist, has followed the path of adding professional ventures one-by-one, always goal-oriented on making sport more accessible. Once a race director, then a TV producer, an advanced training center principal executive, and the director of product development at Newton Running in Boulder, he is now the president of World-OCR, the International Federation of Obstacle Course Racing.

In promoting OCR, Adamson hopes to expand the reach of an appealing, widely accessible sport. “As athletes, we know that if you get focused and driven through sport,” he explains, “That taps into your intrinsic humanity because we are competitive animals, that’s how we survive…it lifts people from the couch to something healthy and positive.”

The Aspen Invitational, a charity bicycle event she co-founded, is how Cari Higgins is giving cyclists the opportunity to test themselves while also helping those who may not have chosen a life of challenge. The former professional cyclist’s event last year raised $30,000 to benefit World Vision, an organization that brings bikes to Zambia where they are used to take goods to market, create healthcare access, and get children to school.

“I will get through this without crying,” declared the 17-time national champion, describing her own Zambia trip. Three words later her voice broke describing riding home from school with one young bike recipient only to discover the middle-school-aged girl— who had never missed a day of classes — had no parents and was caring for three siblings. “Our bikes are such a privilege,” Higgins says. “And this little girl is working her ass off just to get to school thinking that was going to be her way in the world.”

As an athlete, Higgins was a leader. This venture gives her the purpose that was missing from her inward-focused athlete life. “When we leave this earth, we’re gone,” Higgins tells me, and “[This] makes life a bit more worthy.”

“Decided discomfort, voluntary suffering, elective challenge, those concepts are the same whether you’re solving a problem with somebody who’s missing a limb, or missing their eyesight, or if you’re trying to decide the best way to get through a particular section of whitewater or vertical rock,” O’Neill says. Disabilities aren’t voluntary, but, “we do elect all the time to go and have difficult experiences in the backcountry.”

After O’Neill’s older brother was paralyzed from the waist down in 1991, he pioneered methods to help him climb. They ascended Yosemite’s El Capitan 15 years later. Paradox has grown over the last 10 years, providing 1100 experiences in 2017 including trips, training clinics for gyms across the country, and community climbing nights.

Boulder Rock Club hosts community nights that are packed with confident, lithe movement. At Paradox’s selected section of wall, Sam White, with floppy blonde hair and focused eyes, lifted himself from a wheelchair. Once climbing, no bystander could have discerned an ability difference between him and anyone else. “When he first came here, he wouldn’t use his feet,” his instructor explains. That was just eight months ago. 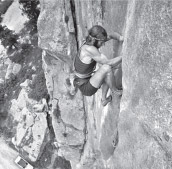 An athlete’s accolades are inherently ephemeral — even the most impressive are vulnerable to fading and eclipse. It is creating, enabling, or supporting a community that creates true legacy. “If you can…plant these seeds, and provide this inspiration, and change lives in an enduring and positive way, then you can essentially transform humanity”, O’Neill says. “It transcends a single life.”

One sunny morning, mist lifting from Boulder Canyon after a night of rain, I followed Roger Briggs to his worksite. The storm had traced rivulets through loose sand. Tree roots twisted high above the mud, marking years of erosion. We chatted with a crew of workers and volunteers skillfully splitting and carrying great stones in litters, crafting a durable staircase. “These are big rocks,” said Briggs, “in a hundred years, these will still be here.”

Briggs’ movements are still fluid, confident. He doesn’t climb as much anymore, managing arthritis. “It’s still a glorious experience to touch rock,” he said, hand to a boulder. “To be on warm rock and just the beauty of places — that’s really what climbing is about, is beauty.” He started this movement, so he understands intimately the need to preserve for future generations. “We are trying to change the culture of [modern, westernized] humans, really, across every area, away from being users of the earth … extracting, exploiting. We want to be stewards of it.”

It’s one thing to have the audacity to conceive of physically accomplishing something never done before. It’s quite another to take that same boldness in the belief that you can shift humankind.

“I’m just a human being,” Briggs tells me, squinting in the tree-filtered sun, after so many years still unsure what to make of those awed by his past and current work. “I just followed my calling.”

View all posts by Mara Abbott →