I Love You, You’re Perfect, Now Change was one of the longest-running shows ever to be performed at the Denver Center’s Garner Galleria Theatre. The small four-person musical review is a compilation of scenes exploring the journey of dating, marriage, children and aging. It’s always a popular show among audiences of all ages and is a mainstay of theaters both large and small. Boulder’s Dinner Theatre Stage brings this hilarious show to audiences from Sept. 15 through Nov. 3 with performances Wednesday through Sunday. Dinner, as always, is included. Tickets start at $39 and are available online at www.bdtstage.com. Call 303.449.6000 for more information. 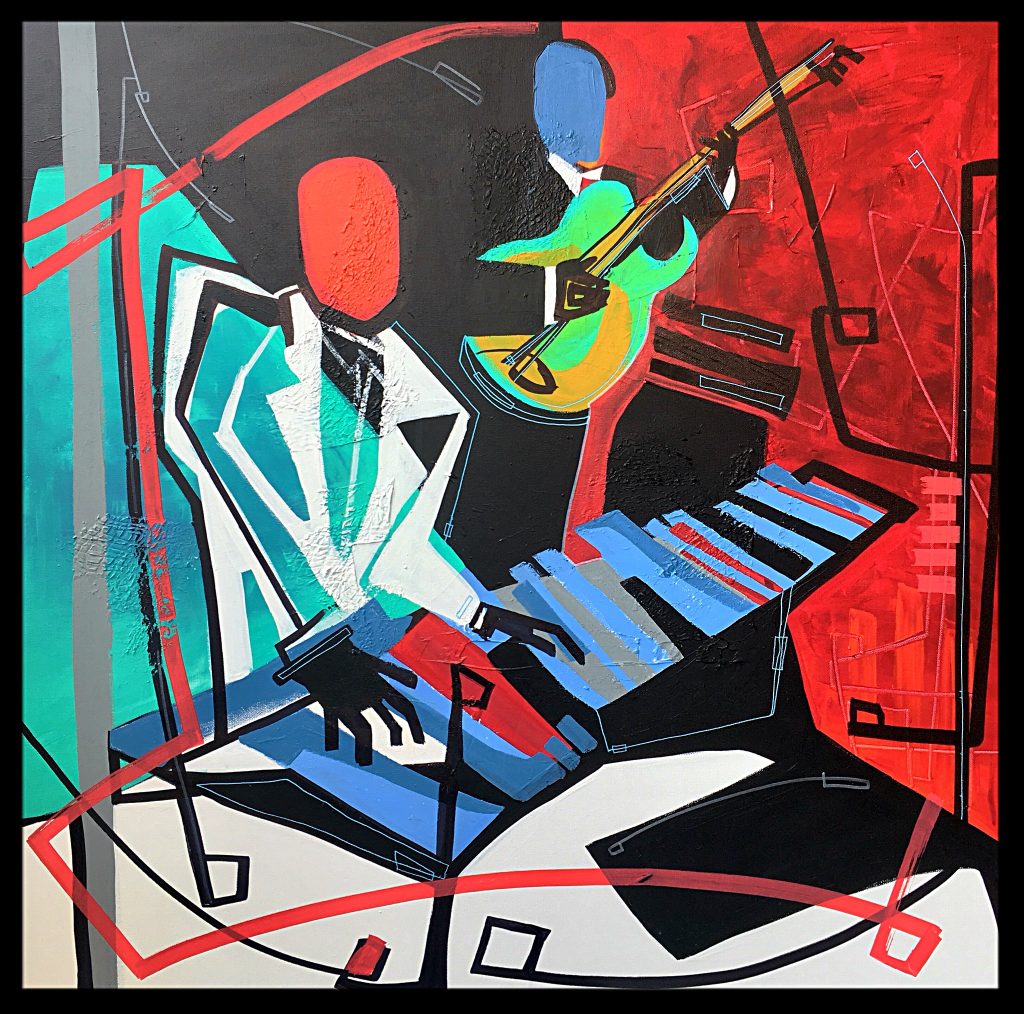 “Freedom is my addiction,” says Jennifer Bobola, a talented abstract expressionist artist whose work has found its way onto a new wine bottle from Kingman Winery, the Palisades vineyard that bottles in a North Denver winery. The Colorado-based tenor and soprano saxophonist has been playing horn for decades, and her art clearly displays the influence music has on her life.

“One of my favorite aspects of jazz and abstract art is improvisation,” she says in her artist’s statement, noting that she uses, “improvisation to make my work more balanced and alive, while manipulating dimensions of color and shape.”

Indeed, her latest series of work boldly leaps off the canvas with striking lines and a powerful color study that vibrates with movement while illustrating an indelible sense of sound. It’s a snapshot of a screaming bop-era Bird and Diz session at the Village Vanguard sometime in the early 1950s, viewed through the bottom of a rocks glass of sipping bourbon. It’s easy to imagine it as an overlay of what someone with synesthesia might see when the music is blaring — it would be at home hanging over an Eames Lounge Chair in Roger Sterling’s office on the set of Mad Men.

In short, her work is fantastic.

Join her for her art opening and celebration of the unveiling of the new bottle on Sept.14 from 4 to 9 p.m. at the Kingman Tasting Room & Winery, 800 E 64th Ave, Unit 9, in Denver. A jazz trio featuring Mark Emmons on drums, Bob Songster on bass, and Bret Sexton on saxophone plays from 5 to 7 p.m., and Bobola will join them on her soprano sax in between signing bottles. The show hangs through most of October. For more of Jennifer’s work and additional information, bookmark her site at www.jenniferbobola.com or follow her on Facebook at www.facebook.com/jenniferbobolaart. 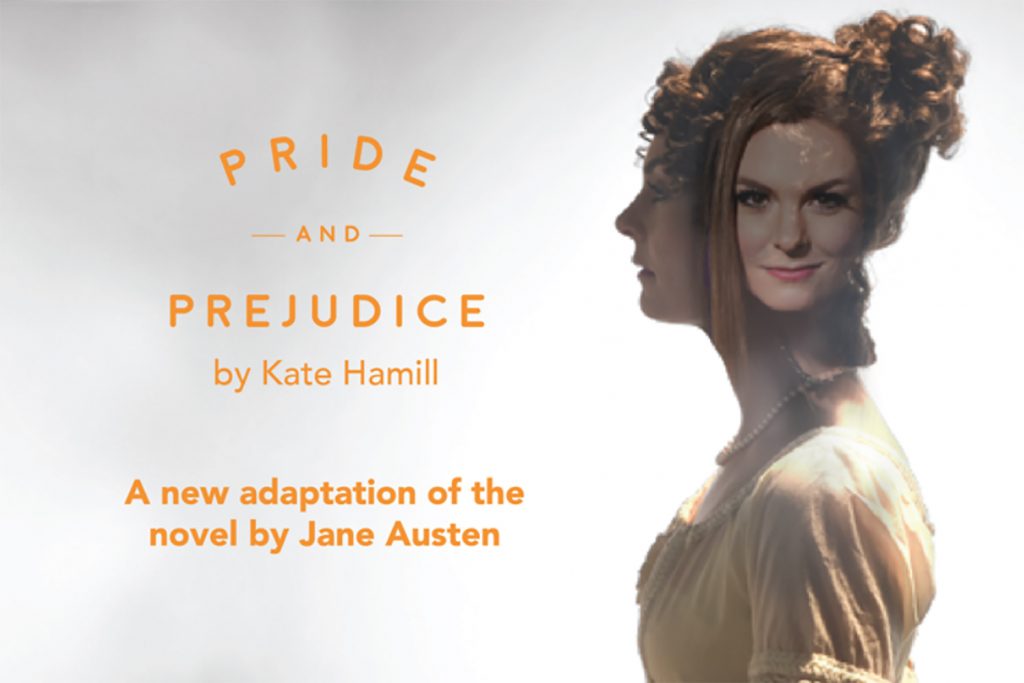 Pride and Prejudice at the Dairy Arts Center

Boulder Ensemble Theatre Company is known for compelling works and powerful performances, so its upcoming production of Pride and Prejudice is one that should be on your radar. This playful adaptation of the classic Jane Austen romance novel brings the story of the Bennet sisters to vivid life as the trials of Mr. Darcy, Lizzy and everyone else illustrate just how serious the game of love can be. Boulder Ensemble Theatre Company presents Pride and Prejudice from Sept. 15 through Oct. 7 at the Dairy Arts Center, 2590 Walnut Street, Boulder. Tickets start at $20. Head to www.betc.org or call 303.444.7328 for more information.

Too Many Zooz at Fox Theatre

Brass-House trio Too Many Zooz began busking in New York City’s Union Station back in 2014. Four years later, there isn’t a horn player under the age of 60 who isn’t familiar with the colorful hair and frenetic dance moves of bari sax player Leo P. and the band’s trance-hop disco-house grooves. Videos exploded all over youtube with tens of millions of views, culminating with a backing band role for Beyonce’s 2016 CMA Awards performance, and underscoring a Google PIxel 2 smartphone commercial last year. Indeed, the group’s stripped-down, analog approach to brass-driven pop music has inspired a legion of brass bands to pop up all over the U.S., and sparked a movement that even has multiple acts bass-mobbing the streets of the Front Range. Catch them live at the Fox Theatre on Sept. 28 at 8:30 p.m. Tickets start at $17, www.foxtheatre.com for more information.

The Invaders From Planet 9 at Chautauqua Park

Arts in the Open is an organization that merges the beautiful backdrop of Colorado’s outdoors with the vibrancy of live theater. For its fall show, Arts in the Open presents The Invaders From Planet 9 that pays homage to the classic sci-fi stories of the 1950s through the story of a group of college students who find themselves in the middle of an alien invasion. The audience will meet at the picnic shelter in Chautauqua Park (900 Baseline Road, Boulder) and then take a moderate hike on the Enchanted Mesa Trail while scenes from the play are performed along the hike. The hike itself is about two miles and gains an elevation of about 400 feet. The show runs Sept. 15 through Oct. 28. Tickets are always limited for these shows and are $20. For more information, call 303.440.7666 or head to www.artsintheopen.org. 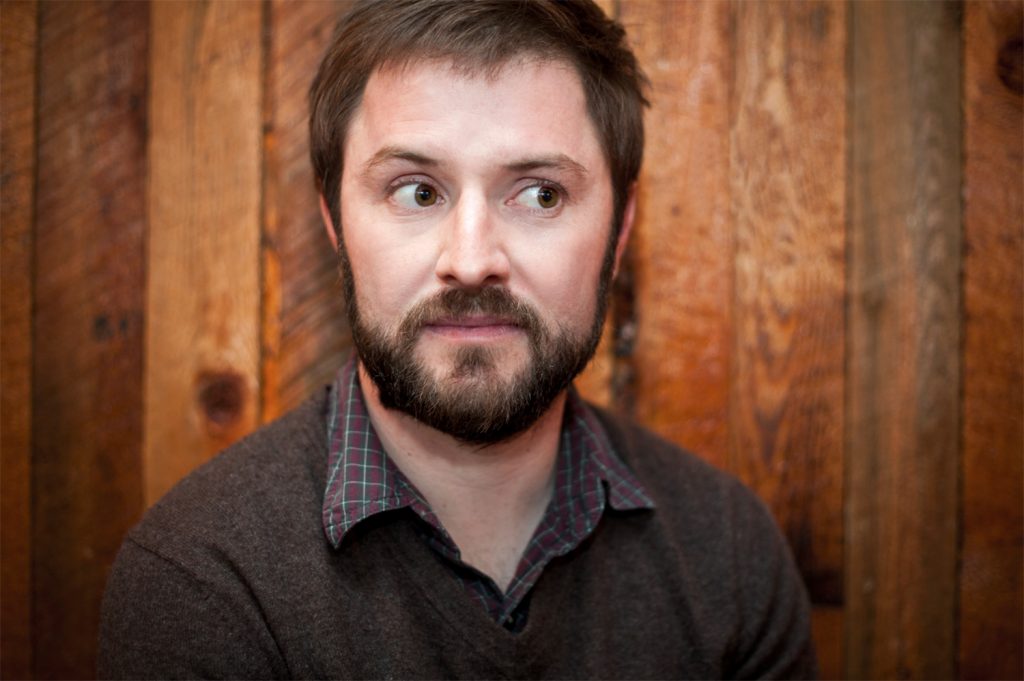 “…When people write to me concerned that someone they love is suicidal, my advice is unflinching: There may be nothing you can really do, but whatever you’re doing to help, do more of it. Ask more questions. Drive your loved one to more doctors. Spend more nights watching him or her sob.” That’s an excerpt from local comedian-gone-big-time Adam Cayton-Holland’s new tome, “Tragedy Plus Time: A Tragi-Comic Memoir,” published Aug. 8 in a guest column in the New York Times. The comic and star of TruTV network’s first scripted comedy, Those Who Can’t saw his book hit the stands last month — it’s a heart-wrenching and at times hilarious, deeply personal account of losing his sister to suicide and dealing with the emotional aftermath. Cayton-Holland’s book is a must-read for anyone dealing with someone struggling with mental illness—and his voice is unmistakably beautiful throughout. And so very, deeply human. Buy the book at Boulder Book Store (1107 Pearl St, Boulder) and bring it with you to his show at Comedy Works in Denver on Oct. 3 at 8 p.m. where maybe you can get him to sign it. Tickets are only $15, www.comedyworks.com for more information.

In Don’t Dress for Dinner, Bernard is planning a romantic escape with his Parisian mistress in his French farmhouse while his wife is away. He’s enlisted a professional chef to help prepare the meal and his best friend, Robert, is helping with a seemingly foolproof alibi; what could go wrong? Of course, as is the tradition in all farces — the answer is, everything. In a chaotic world of high-stakes comedy, Don’t Dress for Dinner is a very funny, high-energy script filled with punchlines and uproarious laughter. Catch this one at Longmont Theatre Company (513 Main Street, Longmont) from Sept. 14 through 23. Tickets start at $18. Call 303.772.5200 or head to www.longmonttheatre.org for more information.