The Erie Board of Trustees held a public meeting today to solicit public comment on the updated operators agreement (viewable here). The meeting, which was held at the Erie Police Station in the courtroom, required advanced sign up and multiple levels of security inspection, before entering. The topic was the updated oil and gas operators agreement that is being negotiated between the City of Erie and Crestone oil and gas. The operator agreement seeks to heighten protocols for health and safety of the community through requiring BMP’s, Best Management Practices, in areas of sound, noise, and traffic, etc. The meeting was attended by approximately 30 concerned citizens, several of which were harried by the security protocols to get into the meeting. We were told upon beginning the meeting that the meeting would be recorded by the police department staff and would be placed online. Unfortunately, the video recording stopped and it took a significant time to get it up and running again. The Daily Camera previously wrote about the operator agreement update.

Trustee Van Woudenberg outlined, after Mayor Carroll’s introduction, that there were three main areas that had been updated in the operator’s agreement.

Many concerns were raised by the citizens who attended the meeting, including our own publisher, Shavonne Blades, who’s three questions focused on the urgency of the meeting and the power pushing it through. Other concerns are outlined below:

1. Regarding concerns raised about Crestone’s apparently unlimited ability to increase number of wells heads per pad (note: we raise these as indication of community fear, concern, and uncertainty. Most questions were replied to my city staff and we encourage you to check the video record, such as it exists, when it becomes available.):

“This is not ok. We’re getting short shrifted. You’re [Mayor Carroll] not upholding the promises you made to us.”

3. In response to local home owner concerns about property values being negatively affected:

“There are studies that indicate that property values are greater – not during the drilling process, but after.” Trustee Woog, who did not cite them immediately. An email to him for citation has not been replied to, as of press time. We will update if he replies.

4. Regarding the city not challenging Crestone strongly enough:

“You haven’t taken the opportunity to address many of the problems in this agreement.” Heather, Vista Ridge

5. Regarding the city moving forward with Vista Ridge but not the Vessels site:

“Why are some people more important than others?” Heather, Vista Ridge

6. Regarding the inability of the city to impact hold Crestone accountable, outside of a narrow scope of topics and redress:

“Is there another avenue?” Tim N.

7. Regarding questions about sight lines for property owners who’s views are obscured by drilling:

“[Crestone] are required to do lanscaping berms.” – Mayor Carroll

8. Regarding the rush to get this OA passed:

“We recieved these [unclear] last thursday. So we’ll have had a week and a halk to review them. I think that’s enough time to read and understand them.”-Mayor Carroll

9. At least one commenter, Pamela N, cried as she shared about her move in situation. She is pictured addressing the BOT below. Not pictured, Trustee Woog, who left early. 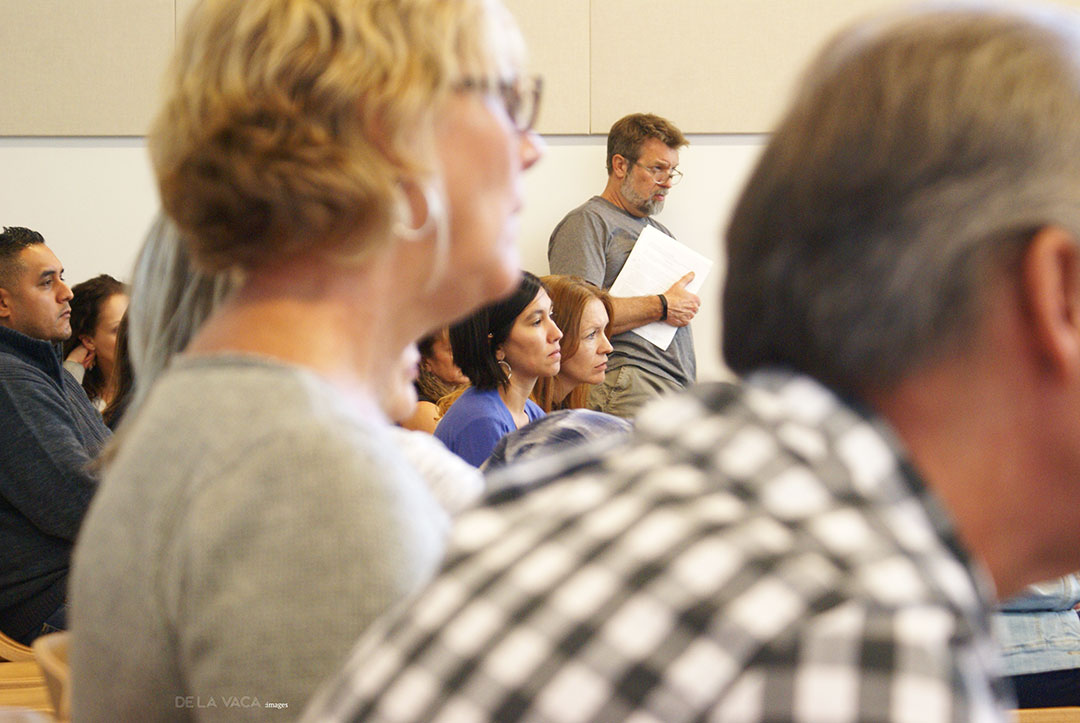 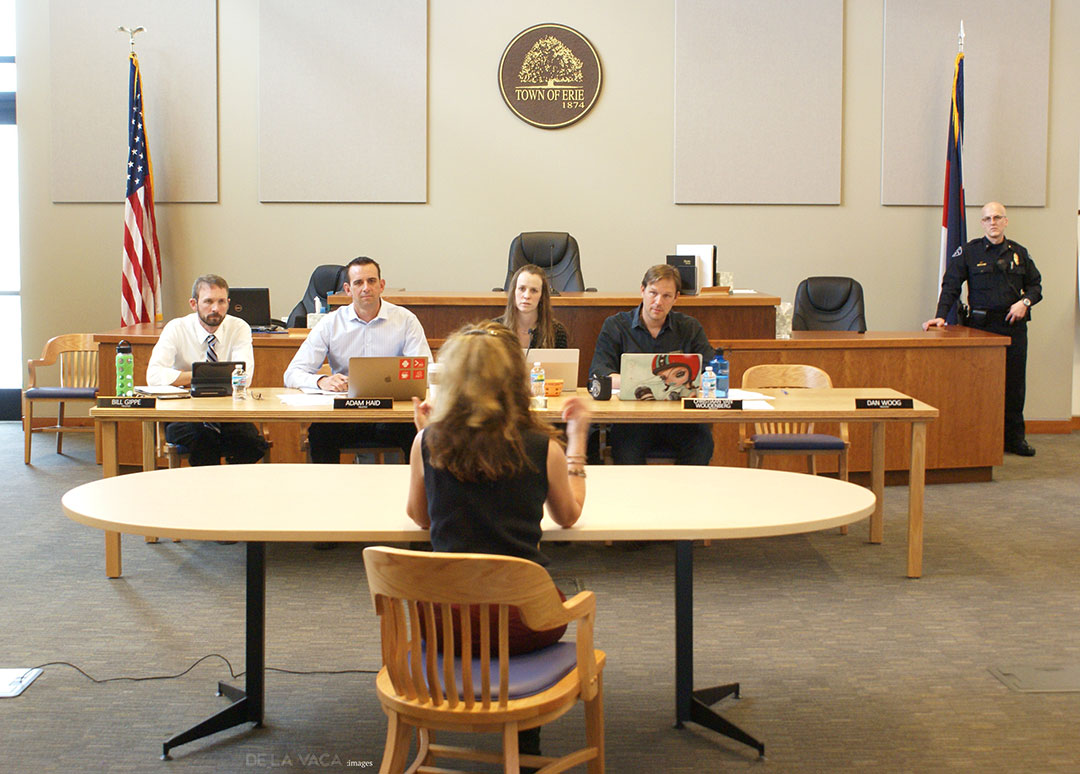 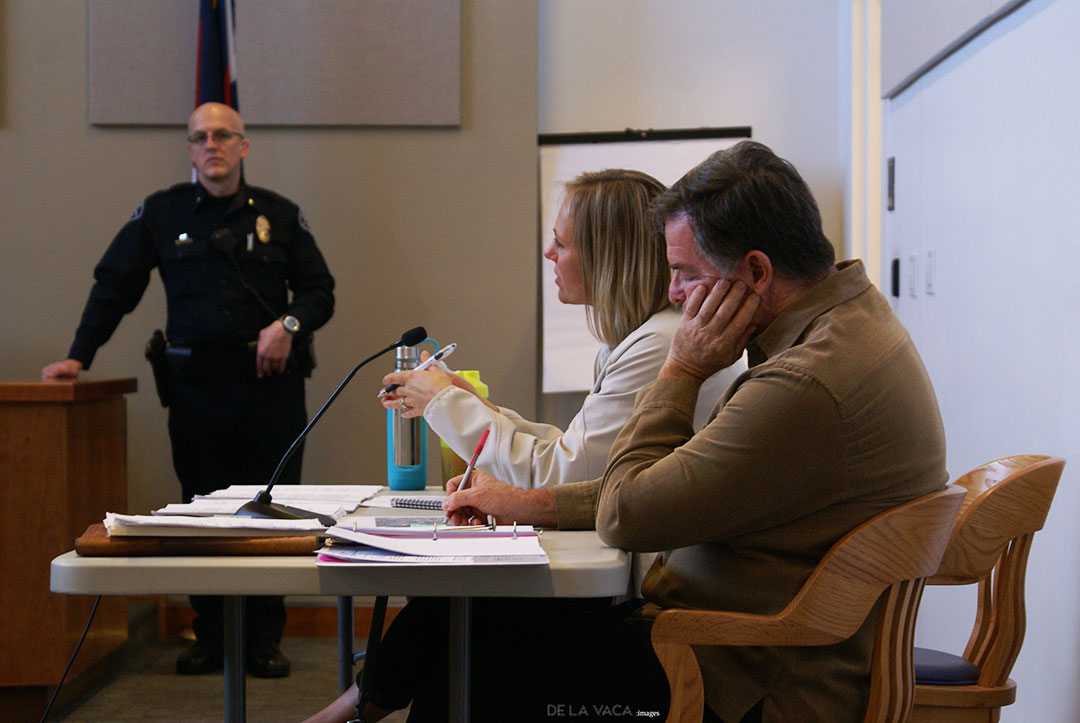 A separate email sent to Yellow Scene was imbued with urgency regarding the language of the Operator’s Agreement, language that arguably provides ample loopholes and workarounds for Crestone to operate as usual, while providing no “bite” for the city to enforce the BMP’s:

Sorry for another email to so many people–I won’t make it a habit, but this is incredibly important to anyone affected by this project.

If you read the BMPs that are an appendix to the new Erie Crestone OA, you’ll notice that the majority have the clause, “Except for the Identified Well Pads…” at the beginning. Acme and 6 other projects (listed on page one) are exempted from the best management practices of the OA.

Acme is also still designated quasi-judicial so we can’t discuss it at BoT meetings. There’s a clause in the OA that the BoT will not request COGCC hearings for forms 2 and 2A for Acme specifically, and the neighborhood meeting is slated to be scheduled only AFTER the OA with Acme in it is approved. That amounts to zero resident input on this project before it is approved.

Please, support the BoT and Erie/Broomfield residents in any way you can to reverse the course of this. I have no idea why this is the project that seems to be the primary concession from the BoT to Crestone, but as you all know, it is residents who are actually being sacrificed here.

“An updated draft of the Crestone Operator Agreement was posted to the Town’s web site on Saturday evening, to include the odor control plan and pipeline map.

If you can’t attend tomorrow’s special meeting, please send your feedback to the Town at erieoilandgas@erieco.gov.”

The outcome of the resolution vote was against: See our report on that meeting here.