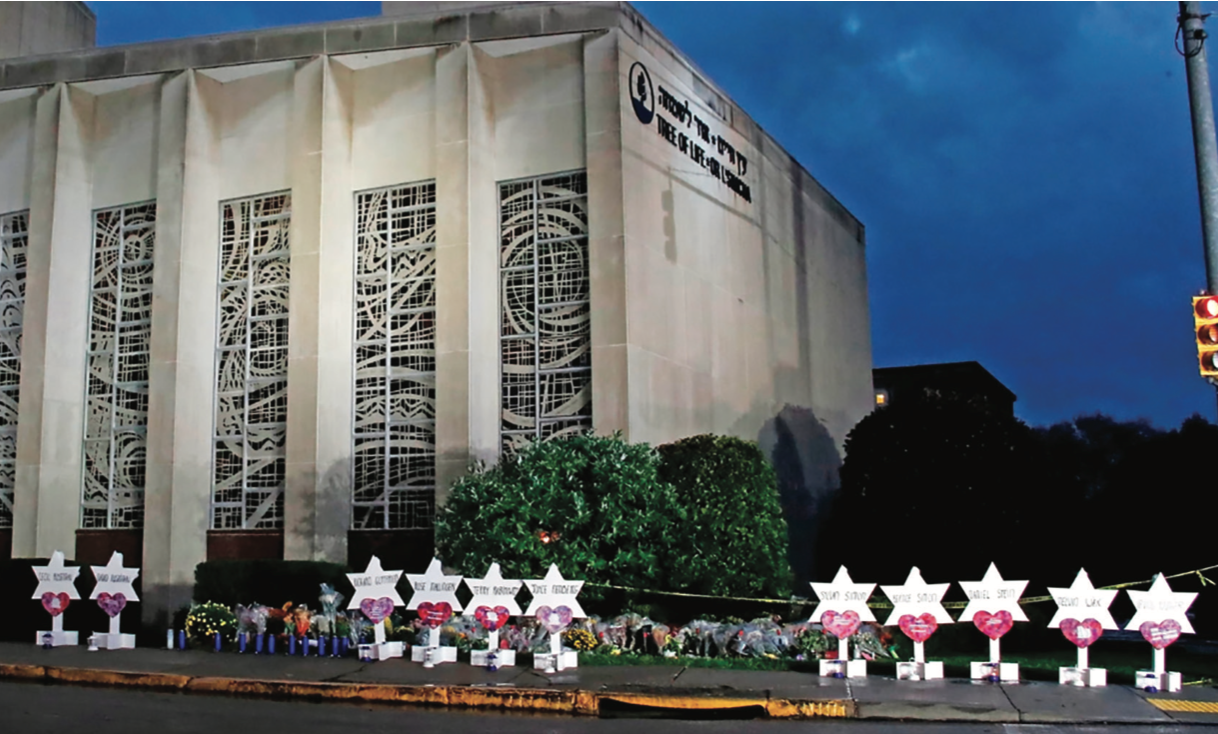 What a strange word to have become so politically charged.

When I was a child, I attended religious school every Saturday or Sunday (depending on how heavy the enrollment was) at Temple Emanuel in Denver. It’s the oldest Jewish congregation in Colorado. I started attending there before they built their additional, smaller sanctuary for the school, and the main one was was a massive room with a soaring marble ark that seemed to be a thousand feet high to me. There were hidden entrances and exits and a whole balcony where a choir sang out of view.

I used to catch a glimpse of a singer every now and then and think it was a magical moment of fourth-wall breaking. I felt safer there than anywhere else in the world.

A few weeks ago, a man walked into another synagogue in another city during shabbos services and gunned down 11 Jews where they sat in the back of a different sanctuary. It, too, was likely a place where they felt safer than most other places in the world. All of them were in worship, among friends and family and people with shared traditions and history. Grandparents, siblings, mothers, fathers, sons and daughters. People just praying on an otherwise normal Saturday morning.

The man hates Jews. He blames us for things. In this case, he said he was mad at us for helping refugees. That the Hebrew Immigrant Aid Society (which has helped refugees from myriad faiths all over the world for decades) was going to help a large group of refugees walking here from Honduras to seek asylum… To seek sanctuary. He believed that there were bad people in that group of refugees who wanted to bomb and murder and rape Americans. He believed it because the President of the United States told him it was so.

All around our country, there are good people who want to help others — people seeking sanctuary. There are whole cities that support this — undocumented immigrants who they don’t want to see deported. They call themselves Sanctuary Cities. Proudly. There are other people here who see that phrase as an epithet. People who are scared of people from other places. They think Sanctuary cities are bad.

By the time you read this, we’ll have cast our votes in the most important midterm election I can ever remember. Hopefully we’ll have started moving this country away from the isolationist, nationalist, xenophobic direction we’ve been heading in for the last two years. Hopefully more of us believe in optimism than narcissism. I wish I was more sure of that.

I don’t know when sanctuary became a bad word exactly. But I do believe that when we are our best selves is when we help people. Each other. Others. When we open our arms and welcome people to come be a part of the ideals we grew up talking about. To be a part of a constitutional republic built on democracy and the belief that we all want the same things. Freedom. Liberty. Hope. Community.