One month ago, on Jan. 9, 2019, four men were arrested with approximately 18,000 lbs of plant matter that Pawhuska Oklahoma Police Department believed to be contraband marijuana. While medical marijuana is legal in the Sooner State, recreational marijuana is not. The shipment was being trucked in from Kentucky to Colorado by subcontracted semi-drivers accompanied by a follow vehicle with two agents from a private security company. The security company employees bonded out just days after the arrest; however, the semi-drivers were released Feb. 8, 2019, after being incarcerated for 30 days. Delays in testing contributed to the confusion in this case and to the dealy in release.

Panacea Life Sciences in Louisville, CO, was the intended destination for this shipment. Company president, Jamie Baugmgartner, stated that this major financial blow to the company’s capital isn’t enough to stop them and that he is still holding on to hopes that his shipment will be returned to him. The DEA’s official test results for this case evidence can be viewed here. If the uncertainty values are utilized (margin of error) only one of the 11 samples tested actually tests above the Farm Bill’s Federal threshold of 0.3% THC. At this time all involved parties are waiting on the Oklahoma DA to clarify what, if any, charges are going to be pursued.

On Jan. 24, 2019, in a parallel situation, a semi-truck pulled into the East Boise Point of Entry weigh station. Denis Palamarchuck’s tractor-trailer was stopped by an Idaho state trooper to conduct a routine inspection. What the officer found was 31 shipping bags the driver claimed to be legal hemp cargo enroute to Aurora, CO, from Oregon. Similarly to the the Oklahoma case, the officer used his field test to show that the substance did in fact test positive for THC indicating to him that this shipment was marijuana. 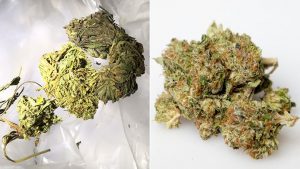 Tests like the one conducted on the hemp Palamarchuck was transporting cannot tell the difference between hemp and marijuana. The Idaho State Police says their analyses, and canine units, can only test for the presence of THC — not the concentration. The agency has since sent a sample of the hemp seized to a lab to test how much THC it contains. The Ada County Prosecutor’s Office and the Idaho State Police are being sued by Big Sky Scientific in regards to this case.

Here are the red flags: states are realizing they don’t have the ability to distinguish hemp flower from marijuana flower on the streets. Without sending to an approved lab and awaiting results they definitively can not say if it is legal for possession or transport. It seems that this has opened a can of confusion about the legal transport of hemp. The Farm Bill provides no protection for anything testing around the 0.3% threshold; however, as a reviving agricultural crop, it seems clear that these two shipments were intended to be utilized legally.

The legal costs now being incurred by counties, states, and defendants seem counterproductive to the intention of the Farm Bill. It seems that until states have the ability to properly distinguish hemp from marijuana they should be trusting the department of agriculture paper work on shipments passing through, but that is not happening.

There’s no logical reason for reputable companies in Colorado to source low quality “marijuana” from out of state. Colorado has some of the highest quality lab tested THC strains available. There is no need to transport loads of plant that is testing below 1% THC. We look forward to police departments across the country normalizing the transport of hemp for use, as the law allows.