“I just realized why I was so happy you died in Blade Trinity!”

“And you shoot basketball (like) the sawed off little man you are.” 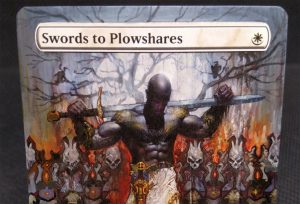 Those were the two tweets a man named Michael Beatty shot out on Jan. 24, aimed at comedian Patton Oswalt, in response to his tweet slamming President Trump. As Oswalt readied his own volley, he read the man’s Twitter feed and noticed that he was dealing with some significant health issues. So he corrected course.

“Aw, man. This dude just attacked me on Twitter and I joked back but then I looked at his timeline and he’s in a LOT of trouble health-wise. I’d be pissed off too. He’s been dealt some shitty cards — let’s deal him some good ones. Click and donate — just like I’m about to.”

At the time this is being written, the original GoFundMe ask was $5,000. The total donated is approaching $46,000, and it’s filled with self-identified Progressives with similar comments: “Patton sent me.” Ignoring the obvious irony of what’s playing out here — an ill guy on the Right being helped by a legion of folks who believe in Medicare for all (or some variation therein) — it’s still a beautiful gesture. And one he received with great humility, based on press reports in the wake of the gesture.

Last month, I experienced something similar. I noticed a back-and-forth on a friend’s Facebook wall between two people — one of which was a Facebook friend. The other was someone he knew, and as the argument escalated, eventually my Facebook friend dropped an anti-semitic slur aimed at him. Except it hit all Jews, as they always do.

My first impulse was anger. It’s always my first impulse in those situations. But I also remembered a sad story from a few months back. Another brilliant artist friend of mine, who suffered from extreme paranoia, started down a pretty debilitating path of anger, ultimately leading to his own demise. I ended our friendship before then, after I caught a rambling podcast filled with anti-Semitic rhetoric. It was a tragic end for a truly brilliant artist.

So, I thought about that moment and decided to reach out to this friend, leading with empathy. And it worked. What ensued was genuine remorse on his part and a much deeper understanding of how his choice of words could be so damaging to someone who had no involvement in that particular conflict he was engaged in — just a bystander catching the ricochet of venom.

It would be nice if these kinds of instances were watershed moments for all of us. Between the shut-down last month, the Covington Catholic school boys situation and the slowly constricting snare of Robert Mueller’s investigation — Roger Stone being the latest catch as of press time — the cacophony of vitriol between camps is at its loudest volume yet. Everyone’s dug in.

I know it’s too much to ask for everyone to beat their swords into plowshares at this point. But what I am going to ask is this: when the opportunity presents itself next time — when you’re standing at the crossroads between conflict and communication — try leading with empathy. Give it a shot. Make a difference to one person.

It’s time we stopped worrying about walls and started looking at building bridges between us all.