Fenberg, KC Becker, Polis give a preview to the new Oil & Gas Legislation 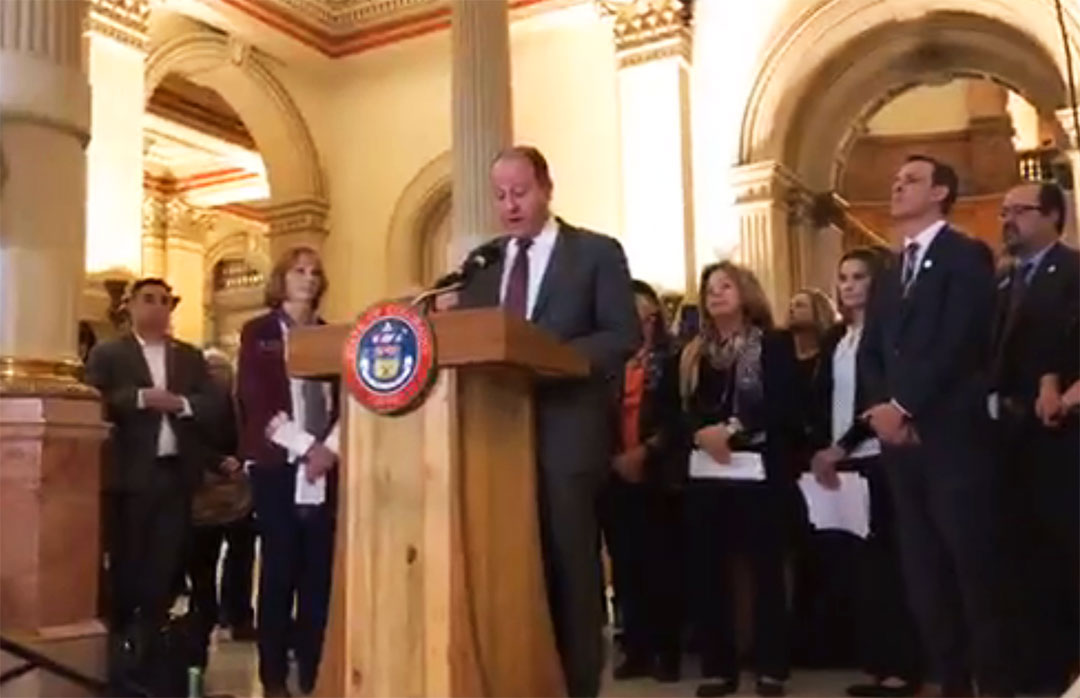 Signaling that times have changed, from steam trains to electric cars, with Colorado built projects landing on Mars, and our neighborhoods having some of the worst air quality in the nation, KC Becker followed Stephen Fenberg’s remarks at the capitol today, marking a small, but important (if inadequate), shift in Colorado’s relation to oil and gas.

Speaking in the rotunda at the Colorado State House, Governor Jared Polis unveiled the major areas of the new bill – written by KC Becker and Stephen Fenberg – that reimagines the regulations that address the oil and gas industry and the local governments that seek to regulate them.

“I said that I would put health and safety first and support local control. I feel this bill is consistent with those principles and delivers them in a way that allows us to implement them successfully to the colorado oil and gas commission,” Governor Polis said.

“Putting health and safety first, of communities, of workers, is critical. And in a state as diverse as ours…there’s not a one size fits all approach to how we view integrating o&G operations into different communities. Under current law, communities are hamstrung in creating rules that work for their local residents.”

Address that hamstringing, Polis outlined the parameters of the soon-to-be-introduced legislation (no new legislation was posted to either KC Becker or Stephen Fenberg’s legislative pages at the time of this writing), including:

Polis made clear that, “we know that this bill won’t solve every issue…but it goes a long way. The steps in this bill are reasonable, important steps that we can take right now.” Some in the activist community have already responded to Fenberg’s facebook live video with assertions that a ban is what we need, rather a mixed bag of vague or half-step measures that politicians hope will pacify activists and concerned citizens while being palatable to the oil and gas industry.

The event concluded with the introduction of Erin Martinez the survivor of the infamous Firestone explosion who related the fears her child lives with. She also said that her family is moving a second time because oil and gas found a developable space under her neighbors home and she wants to keep her family safe. She named Anadarko specifically, the operator of the well that caused her home to explode, and also the subject of recent examinations by Yellow Scene regarding early access to the legislation discussed today. Read that here.

In the end, Polis was on point, saying, “It’s the right thing to put health and safety first”. The question now is – once the actual text of the bill is available for review – will this legislation actually do that?

Editor’s Note: The name of Erin Martinez was corrected from an incorrect earlier spelling.