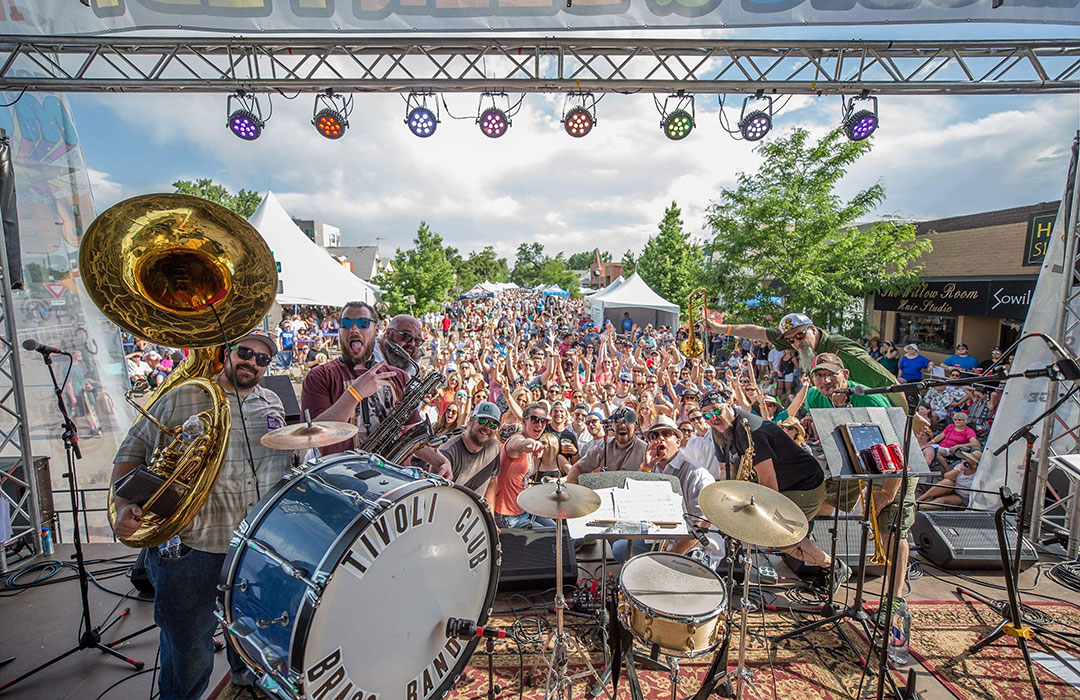 In music — as with most things — things are cyclical in nature. Witness the popularity of the brass band, an evolution of the New Orleans Second Line style that has caught fire over the last couple of years — so much so that Westword included a “brass band” category in their Best Of issue last year. One of the nominees was the Tivoli Club Brass Band, who drops their debut LP, Get Down To The Brass Tracks at a big release party on April 26, with comedian Adam Cayton-Holland and burlesque violinist troupe Gracie G’night and the Go-Go delights all on the bill. Here, bandleader and percussionist Dean Hirschfield talks about the brass band scene, working with 20th Century Fox on the Bohemian Rhapsody movie premiere, funding their album through a successful kickstarter campaign, and absolutely stomps a mexican food metaphor into the ever-loving ground in the process.

French Davis: Tell me about how Tivoli Club Brass Band came together and some of the high points of the experience so far.

Dean Hirschfield: A few of us were having dinner at Jose O’Shea’s having some of those amazing cream cheese and chicken enchiladas and margaritas which naturally evoked the question: what would the song “Seven Nation Army” sound like if it were played by a brass band? We come from different walks of the Denver music landscape, but were all connected in some way — most of the band members are Denver natives. We came together as folks who could not only play well, and play well together, but could also become really close friends. Before every rehearsal, we eat and hang. It’s basically a big family BBQ every time we get together. Because of that, every time we play together is a high point…. Even the long van ride to and from Garden City KS, was memorable and awesome. [The band played the Tumbleweed Festival last year and has been booked to play it again this year —Ed.] When you add a bull horn to any experience, ALMOST everybody has a good time.

FD: Why even bother recording an album in today’s day and age when it’s nearly impossible to recoup?

DH: That is the gamble any band has to take, right? Truth be told, recouping the money spent on the album itself from album sales or downloads is even more difficult for our situation. All of the songs on this record were written by someone else. That means we have licensing fees to pay and any time we sell a physical disc, some of that money goes to the original publisher, songwriter, etc. Any digital download that occurs, the same thing happens. So, we figure for every stream on Spotify we make something like $0.00076, then after the juice goes to the powers that be, we walk away with something like negative $46.38 per stream. But, in terms of the original publishers getting their due, that’s the way it should be, right? We certainly think so. But what the album does do is give bookers an idea of what to expect from us. The album is kinda like the pictures of food at Casa Bonita, but hopefully the real thing musically turns out better on the plate than those “enchiladas.”

FD: Talk about the kickstarter campaign and how to make that a successful experience for other bands.

DH: The success of the campaign really took all of us by surprise. We started out wanting to be able to fund just a simple EP. When we surpassed our goal much quicker than we expected, we figured why not just push a bit more and make the whole “enchilada?” So, we told our supporters, if we can punch through another $1,000, we would make a full-length record. I think there were a couple of factors that helped us succeed. First, we have really cool swag designed by one of our trombone players, Dave “Boris” Flomberg. Then we had some unconventional reward categories such as helping someone quit their job, brass band style. Another reward tier was giving a backer the rights to rename a member of the band. The latter is why the title “Boris” is attached to our trombone player above [Disclosure: Dave Flomberg is a contributor to Yellow Scene Magazine].

FD: What’s with the resurgence of brass band popularity?

DH: Or perhaps the better question is what took so long? When we started this band, we didn’t know about all of the other bands that were already kicking. Come to learn that there is a large, and growing population of great brass bands in Colorado. It works out though, because each band has something a little different to offer — a little different take on the style. It’s a lot like your common Mexican restaurant where even though all of the dishes have roughly the same ingredients, the presentation and taste profiles are totally different. Sure, a tostada is just a taco that requires balance and an enchilada is like both of them, just floppy, but they are all different from one another. That’s why a #5 is different from a #9. But why do substitutions cost more? That we can’t answer.

FD: Talk about the album — the recording experience, the selection of tunes you put together, and production overall.

DH: To really capture the essence of this band, at the advice of Colin Bricker at Mighty Fine Productions, we recorded all in the same room, no isolation parts at all. Which, makes it pretty much impossible to go back and replace parts, but we do believe the results were worth it in terms of the way the music comes across to the listener. There is no canned sauce, no pre-shredded cheese. It’s the authentic enchilada that one craves and deserves. In terms of tunes, I do most of the arrangements — and there isn’t a single song in the book that didn’t elicit at minimum a groan from somebody in the band. I try to choose songs I think will be cool coming from this ensemble and well-received by most people. The result may come across as intending to be a bit ironic, like having a Taylor Swift tune and then “Friends in Low Places,” but that really is not the intention. I thinks these are songs that all people secretly like and this band gives them the opportunity to say, “well, I do like your version of that song,” when in reality, it’s a chance to embrace the listeners’ guilty pleasures.

FD: What’s with the two Queen tunes on this album? Seems like you might have some sort of deeper connection there?

DH: Have you seen that video of the giant crowd of people singing Bohemian Rhapsody at the Green Day concert? When we saw that video, it felt like that particular song connects with people on some sort of way that is beyond understanding. It became a goal of ours to make and perform an arrangement of that song. Then, we learned that the movie [Bohemian Rhapsody] was coming out and we knew it was time. A lot of time went into that arrangement, but it was worth it. Then, out of the blue, we were contacted by the 20th Century Fox folks who were promoting the movie. The brought us on board to perform at the big preview night at Alamo Drafthouse and they hired us to play a spot on the Everyday Show on channel 31. Because of those engagements, we had to work up some other Queen tunes to fill out our set. When we started playing “Fat Bottomed Girls,” there was just something about the way that it grooves through a brass band. We had to include it on the album and of course, there is no way we could leave off “Bohemian Rhapsody.” 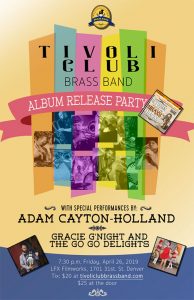 FD: Tell us about the release party — why you chose the venue you did, who’s on the bill and how that all came together; and what attendees can expect.

DH: We settled on LFX Filmworks in Denver’s RiNo district. We really love that it’s a DIY space and their mission of supporting animal rights. We love that it is Denver and that it feels like Denver; both the Denver of our childhood and the Denver of our future. You can walk a block in one direction and grab a Triple 14.398 HBV Double Bock IPA that was charcoal filtered, or you can walk a block in a different direction and get a Corona and an enchilada. And we have a great show planned — we have Gracie G’Night and the Go-Go Delights which is comprised of some burlesque luminaries performing in a way that encapsulates everything that was amazing about the Victorian era but also infuses electric violin, so, you know, the future. Also, Adam Cayton-Holland is going to do a full set of stand-up comedy. Adam is the creator and star of truTV’s “Those Who Can’t,” and has been a guest on just about every late night talk show imaginable. He has toured the world performing comedy. AND, he is from Denver. Also, some of the band (me) is really insistent on getting a Sousaphone-shaped Pinata though.

FD: What’s on tap for this year? Projects in front of you?

DH: Well, we have some really great shows lined up, but we are not really allowed to speak about them just yet, so instead, we will tease a show that has not been scheduled or planned.

We have a goal of arranging the music from Wayne’s World and doing a gig where we perform the music and then show the film. We already have “Bohemian Rhapsody,” and truth be told, we have some others ready to go, just nobody has heard them yet. We love that movie, we love that music. Who doesn’t? Who wouldn’t want to go to that gig, right? It’s everything you could possibly want, all rolled up in a tortilla and covered with cheese and sauce and onions (if you are into onions).

Tivoli Club Brass Band drops their album Get Down To The Brass Tracks at 7:30 p.m. on April 26 at LFX Filmworks in Denver, 1701 31st. St., with performances by Adam Cayton-Holland and Gracie G’night and the Go-Go Delights. Tickets are $20 in advance, $25 at the door; available online www.tivoliclubbrassband.com