.
Beer, it is said, began in ancient Iraq in what was then Mesopotamia. Early evidence of beer was found in a 3900 year old Sumerian poem honoring the patron goddess of brewing, Ninkasi, which contains the oldest surviving beer recipe; a recipe which describe the production of beer from barley via bread. Nailed it. We would also guess that that early beer was probably terrible. Let’s be honest. And while the biggest beer countries in the world, the US and UK, Australia and Germany, are well known for their incredible beer styles, jamieoliver.com tells us that the country with arguably the “richest Brewing tradition in the world is Belgium”.
.
.
This is important for one reason and one reason only: Bruz Beers is hosting their third annual Belgian Brew Fest. The first one was 2017 and here we are in 2019, 2 days and some odd hours away from tasting the best beers Colorado has to offer that are made in the best beer tradition in the world. The 2019 Bruz Beers Belgian Beer Festival takes place on April 28th from 1-4 pm, on the grass at the Bruz Beer comp0und.
.
. 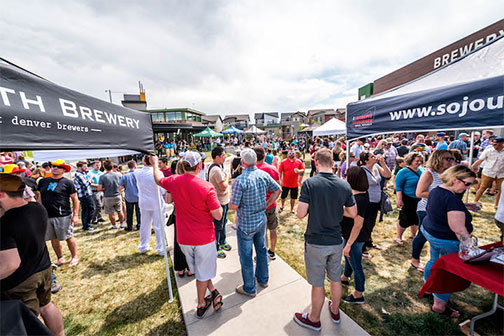 “All the foundations that craft beer was built upon – traditional methods, a focus on quality and an independent outlook – have always been there in Belgium. They never went through the decades of wilderness from the ‘70s onwards that most countries did,” Oliver says. “Belgium is responsible for some of the most important beer styles and traditions in the world ­– some vital, some silly. They are the barons of barrel aging, putting many of their beers in wooden casks to age with fruits; they show the world that 9% beer shouldn’t be downed from a tinnie and a brown paper bag, but from a chalice to be slowly supped in the sun.” It’s a perfect tradition for Colorado beer lovers to embrace, given our sunshine quota and love of suds.
.
.
This year’s festival will feature Ommegang Brewery from Cooperstown, New York, and Duvel, which is one of my personal favorites. They’re going to be bringing “rare Belgian style is not available anywhere else in Colorado” so you definitely want to be there if you like Belgian-style beers. Other breweries participating include Briar Common, River North, Periodic Brewing, Thirsty Monk, Goldspot, Elevation, the Intrepid Sojourner Beer Project, Paradox Beer Company, and Liberati.
.
.
They’re also going to have local kombucha for designated drivers from Trubucha, as well as Morsel, a jam grass band, live taste tracking from Spigot Labs, tons of Colorado sunshine, and happy hour pricing all night inside Bruz Beers after the event (wristband required). The event takes place at Bruz Beers, located at 1675 West 67th Avenue, Suite 100, Denver. It’s North Denver so it’s too not far for our Boulder County beer lovers, especially as an afternoon outing. Given that the weather is looking fantastic this weekend, and given that Sundays are for suds, we expect to see you there. Catch us pretending to take tasting notes and otherwise getting completely smashed on the amazing Belgian beers that Bruz and the rest of our Colorado brewers have to offer.
.
.
Info and tickets available here.