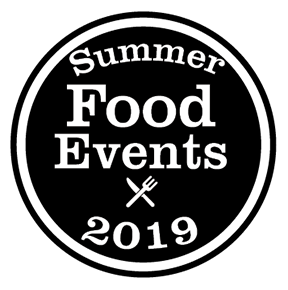 SUMMER FOOD! Check this calendar for all the foodie goodness you need to jam pack every week with something deilicious, decadent, or divine.

The town of Louisville will host its Taste of Louisville food fest on June 1 (9 a.m. to 4 p.m.). Come and try delicious foods and meals prepared by Louisville’s finest restaurants. In addition, there will be craft booths, activities for kids, and local bands performing at the Steinbaugh Pavilion. The food festival will be accompanied by the Taste of Louisville 5 k Run. The “Taste Race” will start at 8.30 a.m. and runners will convene at Pirates Park- Louisville Middle School and finish in downtown Louisville.

Enjoy Bayou Boys’ crawfish, pulled pork, ribs, and beer at the Crawfish Boil and Summer BBQ festival, which will take place on June 8th in Arvada. There will also be live outlaw country music!

A Taste of Puerto Rico

A Taste of Puerto Rico will take place on June 9th at the Denver Civic Center. Come and enjoy the Puerto Rican culture with food, music, dance, and art! Celebrate with Latin Jazz, Salsa, Cuban Fusion, Merengue, and Reggaeton. A Taste of Puerto Rico is one of the largest Latino festivals in Colorado. The festival is expected to bring approximately 30,000 attendees from around the state.

The Arvada Chamber of Commerce will host its annual Taste of Arvada food festival on June 13th at the APEX Center in Arvada. The festival will showcase more than 70 Denver Metro and Arvada restaurants, craft breweries, and distilleries. In addition, restaurant and bar vendors compete for prizes, voted on by attendees.

Celebrate Father’s Day weekend at the second annual Denver BBQ Festival. The festival is bringing back the world’s best pitmasters to serve the most delicious BBQ in town. BBQ and beverages will be available for purchase. With a VIP Pit Pass you can see the world’s greatest pitmasters, where you can watch them cook their world-famous BBQ. You also get complimentary cocktails, beer, Gnarly Head wine, Gold Peak Tea, and soft drinks.

The Denver BBQ festival organizers have assembled a team of the best pitmasters in the United States, many of whom have won world championship trophies. Pitmasters will come from Texas, Missouri, New York, and Montana.

At the Denver BBQ festival you can watch some of Colorado’s greatest musical talent. On June 14, Woodshed Red and the Hazel Miller Band will be playing. On June 15, the festival will showcase Wirewood Station, The Rick Lewis Project, Chris Daniels and the Kings, and Buckstein. On June 16, come and watch Rapidgrass, My BlueSky – A Tribute to the Allman Brothers, and the Austin Young Band.

There will be fun for all ages! The Macy’s Foundation, in cooperation with We Don’t Waste, will have games and activities for kids.

The Quick Cuts event is one not to miss. It will bring to the stage each legend on Pit Row to showcase their secret BBQ recipes. Examples of Quick Cuts events include how to cook smoked prime rib, beef fajitas, tri-tip steaks, bourbon glazed bacon wrapped prawns, smoked catfish tacos, and grilled rack of lamb with sweet southern fig sauce.

“Creating bridges, not walls, through the exchange of food, culture, and music” is the theme for the Ethnic Dishes by Just Chill Food Festival which will take place in Denver. The festival will display food samples from 3-7 established restaurants representing cuisines from different parts of the world. An exhibition of the Jus Chill Food Hut will showcase the culinary skills of a headlined chef with over 20 years’ experiences in the Jamaican food industry. In addition, there will be local bands and musicians playing music from all regions of the world.

At the Big Eat food festival you can experience unlimited bites from 60 of Denver’s finest restaurants along with bottomless sips from Colorado breweries, wineries, cideries, and tea and soda makers. Examples of restaurants at the Big Eat include Aloy Modern Thai, Blue Agave Grill, Jax Fish House and Oyster Bar, the Berkshire Restaurant, the Kitchen, Revelry Kitchen, and many more.

Celebrate the Hot! Hot! Hot! Film fundraiser at the Avalon Ballroom in Boulder. Enjoy food samples from top Denver and Boulder chefs. There will also be dancing, a live auction, and a short film showing. Restaurants who will be at the festival include Basta, Flagstaff House, Ras Kassas, and Bijou’s Little Curry House.

The Avalon Ballroom
$75.00 advanced sale, $85.00 at the door.
flatironsfoodsfilmfest.org

Support the global, grassroots movement to prevent the disappearance of local food cultures and traditions by attending the Slow Food Nations Food Festival. The event is hosted by the non-profit organization, Slow Food USA, which was founded in 1989 with the aim to promote local chefs and farmers. Some of the core values of the Slow Food movement include: a) to promote food that is local, seasonal, and sustainably grown; 2) to fight for the dignity of labor from field to fork; and 3) to cultivate connections to community. Slow Food USA is part of a global Slow Food movement which is active in 160 countries. In the United States alone, there are more than 150 local chapters with 6,000 members.

This year’s event is called “Where Tradition Meets Innovation.” The festival will include workshops, a taste marketplace, block parties, a tasting room, educational forums, a speaker series, and a family pavilion. At the taste marketplace, festival participants can experience cooking demonstrations, free talks, food trucks and workshops. Come sample delicious food and meals from over 100 merchants. The merchants attending the festival include Gotham Greens, Superior Switchel, Hani Honey Company, Teton Water Ranch, and Burly Beverages, among others.

There will be free workshops on topics such as The Art of Fermentation, The Sweet Source of Craft Chocolate, and A Taste of the Yucatan Peninsula. The block parties include Colorado Fare, Food over Fire, and Zero Waste Community Supper. The Colorado Fare block party showcases the breadth of Colorado’s food culture and will include food samples from over 15 chefs in the state. Local craft beverages will also be available. Festival attendees who participate in the Zero Waste Community Supper can watch chef Steven Satterfield and chef Eric Lee reuse food waste from the festival in order to create delicious, healthy dinner meals. The event will feature an all-star cast of chefs.

Come vote for Boulder’s best taco! The Boulder Taco Fest will take place at Foothills Community Park. The 3rd annual Boulder taco fest will highlight 5 local breweries, 10 taco vendors, 5 live lucha libre wrestling matches, and 3 live bands. Choose from a variety of craft beers and freshly made margaritas, with VIP’s having access to free tequila tastings. There will be pinatas for kids and adults, with prizes from the sponsors of the Boulder Taco Fest.

Last year, the Boulder Taco Fest was awarded the Best Beer Fest in the Rockies by Elevations Outdoors Magazine. Why? Because of its awesome mix of great drinks, gourmet tacos, and entertainment. The festival will open with music from the band Red Sage, a growing reggae act rooted in the soil of Colorado. The band has played with an extensive list of artists such as John Brown’s Body, Gonzo (of Tribal Seeds), Through the Roots, and the Hip Abduction. Other live bands include Silver and Smoke and Guerilla Fanfare Brass Band.

VegFest Colorado is a two-day food festival that promotes a plant-based/vegan lifestyle and will take place in Broomfield.

The event will also feature famed speakers who give talks about health, diet, and environmental issues. Key speakers include Dr. Andrew Freeman, who will give a talk about Plant based diets – what’s the latest science; Dr. Aysha Akhtar, who will speak about the importance of having empathy for animals; and Jane Esselstyn, who will give a talk titled “The Benefits of Plant-Based Nutrition Above and Below the Belt.”

In addition, chefs will be on hand to give demonstrations on how to prepare and make delicious vegan meals. Andrew Roettinger has been a chef to entertainers and presidents. He is the author of the cookbooks Speed Vegan and Extraordinary Vegan. Carla Boyd will give a presentation titled “Cooking with Hemp.” Boyd is the founder of Hemp Way Foods, a hemp-based food company. Deborah Devore will give a presentation titled “Vegan Seaside Sandwiches- Chickpea Tuna Salad, Crab Cakes, and Rainbow Slaw.” Devore is the owner of Almost Vegan Cooking School, which is a non-profit that provides free cooking classes for those who want to transition to a plant-based diet. Finally, JL Fields will give a presentation on the topic of “Vegan Meal Prep: Learn How to Save Time, Save Money, and Flex your Culinary Muscles.” She is the founder of Colorado Springs Vegan Cooking Academy.

The concept of the Fit Foodie was born out of the idea that a healthy lifestyle and delicious culinary experiences are one and the same. Come and enjoy the Fit Foodie Festival and 5k/10k race! The event will take place on August 3rd at Westminster City Park in Denver. With the registration fee participants receive bites along the race course, as well as access to culinary and fitness demonstrations. There is also a beer garden and food tasting stations. The Fit Foodie Festival & 5K benefits No Kid Hungry, a campaign of the national anti-hunger organization Share Our Strength.

The Denver Brunch Fest will showcase delicious meals from some of Denver’s finest eateries. There will be bottomless mimosas and Bloody Mary’s as well as food samples from dozens of restaurants. Enjoy live entertainment.

A Taste of Colorado

A Taste of Colorado, originally named Festival of Mountain and Plain, was first established in 1895 as a carnival similar to the Mardi Gras festival in New Orleans. In 1983, the Downtown Denver Partnership revived the festival, eventually renaming it “A Taste of Colorado.”

A Taste of Colorado will have something fun for everyone. More than 50 of Coloradans’ favorite food trucks and restaurants will be at the festival. Participants can enjoy nibbles from taste-sized portions to full meals. There will be over 175 arts and crafts booths where festival participants can shop for unique arts and crafts, furniture, and jewelry. There will be 3 outdoor stages which will highlight live entertainment, from country to classic rock n’ roll music. The festival will showcase 25 national and regional music artists. Don’t miss one of the best music festivals in Denver!

The Kids Zone will offer free activities for kids of all ages. For example, the Denver Public Library will have their Wheelie book bike as well as story time on Saturday and Sunday from 1 pm to 4 pm. The Children’s Hospital will be handing out band aid dispensers and coloring sheets. Children can also learn with the interactive “Snug Play,” a Pop-Up Playground from Street Scapes. Kid-friendly food vendors will sell pretzels, pizza, funnel cakes, popcorn and more.

A VIP ticket will give you access to exclusive food sampling, a special viewing area near the stage, one alcoholic or non-alcoholic drink, and you can enjoy the privacy of an indoor lounge with concert viewing on a movie screen.

View all posts by Ambika Chawla →