Boulder’s Independent Legal Review Of Sammie Lawrence Arrest: Anything But

Darren O’Connor is the legal writer for Yellow Scene and graduated from Sturm College of Law in the 2019 cohort (not yet licensed). He was the President of the law school’s National Lawyer Guild chapter, and he is currently the Chair of the Criminal Justice Committee  for the NAACP Boulder County Branch. 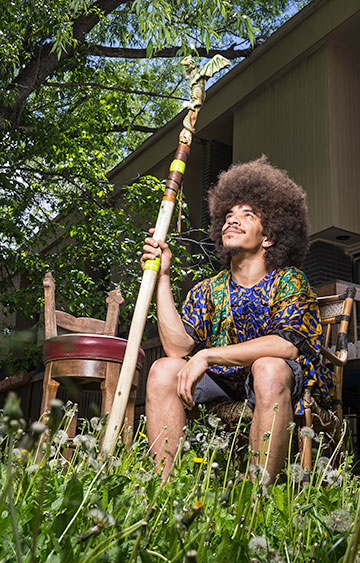 Mr. Troyer’s so-called independent review of Mr. Lawrence’s brutal arrest regurgitates the Boulder Police Department’s reports and, leaving critical details out, predictably but disappointingly concludes that no policy was violated either in the arrest or in the department’s review of the arrest.

Mr. Lawrence and his legal counsel were denied any input into the investigation, and it is thus not surprising that missing from the report is any mention of law or fact that are germane to the concerns of Mr. Lawrence and the community. No mention is made of Mr. Lawrence stating repeatedly during the incident that the “staff” in his hands was a walking aid he requires for his disability of suffering from non-epileptic seizures. No mention is made of Boulder Revised Code 5-5-3(b), which states in part that “No person, upon being ordered by a police officer to move to a distance of eight feet from the police officer, or to a specific place which is no more than eight feet from the officer, while the officer is investigating what the officer reasonably suspects is a crime or violation of this code, is interviewing a suspect or potential witness, or is making an arrest, shall fail to comply with such order,” (emphasis added).

Mr. Lawrence appears to have been further than eight feet from arresting officer Lolotai during the entire encounter. It is unclear whether Officer Lolotai was ever conducting an investigation or suspected a crime, warranting detaining suspects or, in this case, issuing an order that a reasonable person would believe he has to follow (keeping in mind that just a month prior, the police agreed that policy was broken when an officer attempted to detain Zayd Atkinson and he refused to follow the officers’ orders).

In order for an officer to invade a citizen’s privacy protected by the Fourth Amendment,”(1) there must be an articulable and specific basis in fact for suspecting that criminal activity has taken place, is in progress, or is about to occur; (2) the purpose of the intrusion must be reasonable; and (3) the scope and character of the intrusion must be reasonably related to its purpose.” People v. Perez, 852 P.2d 1297, 1300 (Colo. App. 1992) (emphasis added).

Troyer reports that Lolotai was at the scene “because there was a large group of homeless people in that area littering, smoking marijuana, and disturbing people.” City Attorney Tom Carr made the public statement that “the officers were talking to three homeless individuals on the ground. There was no ticket issued before or after. I don’t know if there was ever any intent to issue a ticket.”

There is a large gap, both literally and credibly, between a report of “a large group of homeless people” breaking the law and “three homeless individuals on the ground” and not knowing “if there was ever any intent to issue a ticket.”

If our City Attorney, in reviewing the arrest, was unsure whether Officer Lolotai was conducting an investigation or simply having a conversation based on the consent of the individuals he approached, how was Mr. Lawrence to be sure?

Regardless, if Officer Lolotai was deemed to be investigating a possible crime, he is still only authorized to tell a person to step back eight feet or less. Mr. Lawrence appeared to have been located further than eight feet away during the entire time Officer Lolotai threatened him with arrest. Not until he arrested Mr. Lawrence was the distance less than this. At no time was kicking Mr. Lawrence’s walking aid away and violently throwing him to the ground an intrusion within the scope and character that could be reasonably related to its purpose. (Id.)

Troyer’s report fails to reference at all Mr. Lawrence’s disability, despite Mr. Lawrence stating clearly in the videos that he was disabled and that what he was holding was his ADA qualified walking aid. Troyer regurgitates that Officer Lolotai instructed Mr. Lawrence that “he was welcome to video-record the encounter but would have to step back or put down the staff.”

Neither of these options was reasonable. Mr. Lawrence, in accordance with Boulder law, was already further back than Officer Lolotai had authority to demand of him. Dropping his walking aid after Mr. Lawrence had described his medical reliance on the aid due to disability was also unreasonable. Would Officer Lolotai have asked someone on a respirator to desist using oxygen because the tank was scary? We doubt it. At no time did Mr. Lawrence offer any resistance other than calmly explaining he needed to be close enough to witness the officer’s treatment of those he was talking with.

Officer Lolotai’s supposed offer that Mr. Lawrence could continue to film was in fact no such offer at all. Mr. Lawrence had to choose between his medical safety, being unable to witness and film Officer Lolotai within his rights, or to do as he did: stand calmly and non-threateningly as a witness.

Mr. Lawrence was taken to the hospital for the injuries Officer Lolotai inflicted, and requested but was denied a wheelchair. Medical personnel ignored Mr. Lawrence as the latter informed them he was about to have a seizure, claiming he was faking the seizure, and he subsequently fell to the floor. Mr. Lawrence has had to seek emergency medical care at public events in the past, and we find the police and the staff at Boulder Community Hospital ignoring his expression of his medical condition disturbing, to say the least. Hospital nurses and police do not qualify as medical experts to so easily discount a person having a non-epileptic seizure, as Mr. Lawrence describes his condition.

Notwithstanding the above,  filming the police is a First Amendment protected activity, and “the rights of the state to limit the exercise of First Amendment activity are ‘sharply circumscribed.'” in a public park (the forum in which Mr. Lawrence was arrested and beaten). Glick v. Cunniffe,  655 F.3d 78 (1st Cir. 2011) (holding that lower court’s denial of qualified immunity to police who arrested a citizen recording the police in a public park was not in error).

Officer Lolotai’s Numerous Uses of Force Show Boulder Has An Informal Policy, Pattern, or Practice Of Condoning Excessive Use Of Force.

Officer Lolotai’s excessive use of force is documented in a recent civil case brought forward by Kelly Clark, a diminutive 5’4″woman he pushed off her feet and into the air less than a year ago. Under more confrontational, but still disturbing conditions, Officer Lolotai smashed 5’2″ Michele Rodriguez’s face into the ground, leaving her bloody. A jury recently found her not guilty of an obstruction charge (the same charge Lolotai used as an excuse for Ms. Clark and Mr. Lawrence) by reason of self defense against the 6’4, 265 pound former football player.

Boulder Police Department hired Officer Lolotai with full knowledge he was under investigation at the Denver Jail for similar excessive use of force. He quit and was hired on with Boulder before the investigation, which had gone on for over a year, was completed. His resignation ended the investigation and kept his record clear of any finding of improper behavior. This is a method by which officers avoid responsibility for their inappropriate behavior and go on to be rehired at another department where they, too often, repeat the same behavior. Such is the case here.

Conclusion: Independent Review In Name Only

The Boulder Police Department investigation, and now Mr. Troyer’s, is, sadly, a whitewashing and sanitizing narrative, leaving out damning facts and law in a clear effort to absolve BPD – and office Lolotai specifically – of the beating of a young, disabled Black man, which shocks the conscience of the Boulder community. We conclude that the police cannot police themselves, and that this independent investigation was anything but.