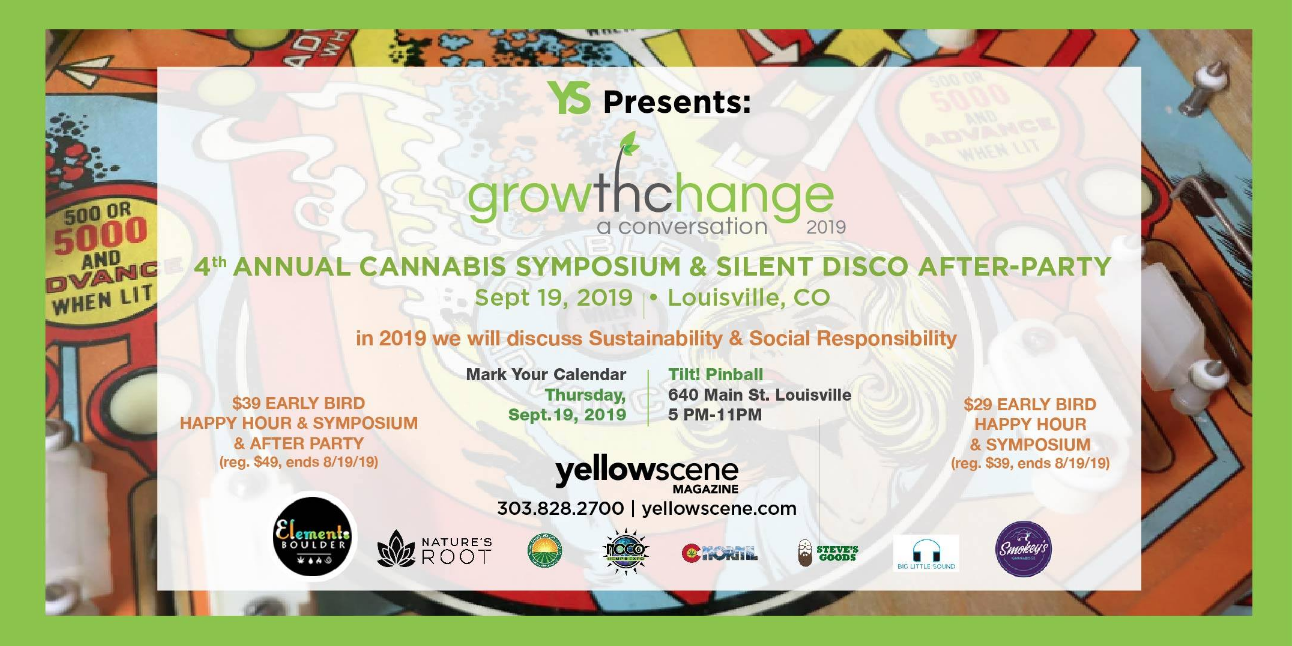 The cannabis industry has reached record growth measures both in Colorado and on a National level. While it is cause for some celebration – the conversation is not over.

As an independent publication, we realized that there was a lot of misinformation about cannabis spreading through our local community. Shavonne Blades, publisher of Yellow Scene Magazine, believes that, as members of the media we have a responsibility to counter that spread of misinformation by facilitating actual conversation. “I really do believe in our role and responsibility. I believe that down in my bones,” Blades states.

The goal is to engage the public through accurate information. To create a conversation between the public and the industry.

The Annual Cannabis Symposium began in 2016.

The goal for the event was, and remains, to spread accurate research and information about the cannabis industry, and to initiate an informed and educated conversation about cannabis. It is a non-consumption, non-celebratory event, that instead works to connect the industry with the community. It is not a 420 party event or even a business networking gathering, but rather a community event.

Each year the topic has been chosen based on what is most topical at the time.

In 2016 we talked about legitimization. Speakers discussed how to legitimize the cannabis industry and, how the industry should portray itself to secure that status. The goal was to move beyond fear-mongering from law enforcement and government to counter the stigma associated with cannabis use. We chose this topic for the inaugural event because we believe that in its infancy, the industry had a ways to go to portray itself with the professional characteristics it needs to change stereotypes.

The event was so engaging that during that first Annual Cannabis Symposium, people didn’t want to leave! The event went an hour and a half over schedule because the conversation was so lively. People reported that they left the event with a “natural high”.

In 2017 the event tackled regulations. The conversation was specifically about the history of, and current cannabis laws and regulations among four esteemed leaders in the community. Because of the sensitivity of the topic, we saw rather lively discussion during the Q&A of the panel. In 2018 we talked about cannabis products. Industry experts spoke about different cannabis products and corresponding environmental and health benefits, as well as the genetics of the plant.

Check out our first three Cannabis Symposium’ at the Yellow Scene YouTube Channel.

Blades thinks, like many eco and ag industry professionals –  that “hemp can save the world” from its climate-change-induced destruction. Switching from single-use plastic to hemp bio-plastics can be a good start to changing human impact on climate catastrophe.

This year’s discussion will focus on how the cannabis industry can and should change our communities for the better, improve and reduce environmental impact, and what that path looks like. We will be looking at Sustainability and Social Responsibility from the criminal justice system, to how we grow and the use of hemp and packaging.

Lined up to speak at this year’s event are Boulder District Attorney Michael Dougherty. Dougherty is going to speak on the government’s social responsibility around cannabis convictions and governmental priorities in cannabis.

Judy Daniels Phd. from Soil Sage LLC, is going to speak about sustainable growing with her specialty topic being regenerative agriculture.

Elizabeth Knight from Co Hemp Co and co-producer of NoCo Hemp Expo. Knight will be discussing all the things hemp.

We are still working to find the perfect organization to come help us speak on hemp packaging, which is in its infancy as well. In fact, we are learning the only thing truly holding up production, is production. Meaning, having the product and the political will.

This year’s Cannabis Symposium will be hosted on September 19 from 5:00-11:00 PM at Tilt Pinball in Louisville, Colorado.

While we will have a very serious discussion, the event will be followed with some celebration too, with the Silent Disco After Party produced by Big Little Sound.

The event will have a 5:00 PM Happy Hour and dinner, followed by the symposium at 6:30 PM, with a Silent Disco After Party from 8:45 PM until Tilt kicks us out. As a bonus –  during scheduled breaks you can go play a few fun arcade games!

View all posts by Sarah Golden →