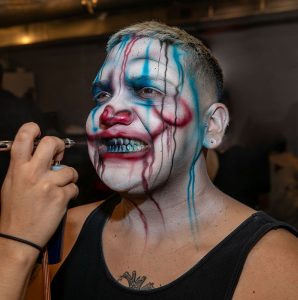 Creepy clowns and macabre monsters morph to life with help from the experts. Most Denver residents have heard of the 13th Floor Haunted House and they’re either all in or all out. Every year, the nationwide attraction gets more twisted and terrifying, and the dark minds behind the chilling theatrics get more devoted into diving into people’s fears every year.

This year is no exception to the madness. Lili Aguilar, Makeup Designer and Advisor for the 13th Floor’s Denver location, says this year’s freak show is on another level with three different “universes” based on maddening plots. A ticket to the 13th Floor will give you access to “Clown,” a pop culture-inspired, ‘80’s Thriller-esque attraction with horrifying characters suffering from “clown disease.” “Tales of the Unknown,” which is a science-lab-gone-wrong scenario with half-animal, half-human creatures, and “The Other Side,” which appears to be strongly inspired by the hit TV show Stranger Thing’s’ Upside Down world and subtly mentions that a friend may go missing. Sounds like fun.

The themes rotate every year, but attendees aged 18 and up can also opt to enter an additional attraction called “Sensory Overload” and it sounds terrifying.

“It’s a pitch-black maze where you have to feel your way out of there and there are different textures, smells and a terrifying sound. You’re in complete darkness. All of the sudden you get a flashing of light that disorients you,” Aguilar said.

“It’s for anyone who needs that extra level of fear in their lives.”

In addition to the nightmarish lineup of attractions, the 13th Floor’s Denver location will also feature axe-throwing, hosted by Class Axe Throwing, where participants can throw five axes for $5, a “Shriekeasy” bar, mini escape games, food for purchase, merch tents, and photo ops. 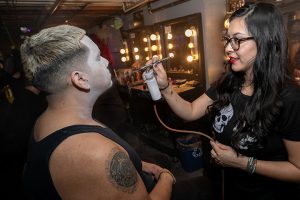 “I think that makeup is one of the most important things with everyone’s costume.It’s just a really great way for pushing creativity and producing your own unique character.” 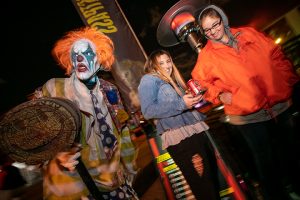 On average, each makeup artist works on at least 10 faces a night and the gory makeup can take anywhere from two to 15 minutes each. Getting all the actors prepped to scare can take hours every day.

As for the inspiration behind the makeup, Aguilar says that it starts with the casting call.

“We have a script. We come up with a design and then we find characters. They’ll show us how monstrous they can be and then we train to fit the narrative and script we’re going for,” she said.

“Then we have our performance manager find talent. The performers do an audition and based on the way they portray their own monster or character, is how they’re placed in the house. Some people are better at dialogue, while some people have a really strong voice. Depending on their specific qualities, they’re selected for certain areas of the attraction.”

Depending on how an actor decides to portray their character is emphasized through makeup. For example, UV lighting, facial features and hand movements are all drastically taken into consideration.

At the 13th Floor in Denver, Aguilar says there are roughly 45 to 60 actors per night, and coming up with all of these various characters and creating looks for them is quite the challenge. While some actors will be in masks and only need their eyes darkened, others are a bit more challenging — specifically the characters morphing into animals like rats and lizards. 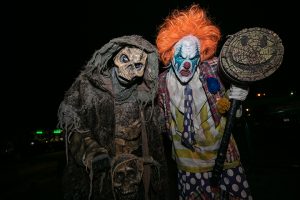 Aguilar laughs, but she jokes that she even takes an actor’s natural “flaws” into consideration.

“We’re accentuating that you didn’t sleep at all last night,” she said.

According to Aguilar, her career of monster makeup started when she just began messing around with cosmetics at home. She got better and better and realized she enjoyed it. She encourages anyone with a passion for makeup to just get started experimenting.

She knows some people often forget about makeup around Halloween, but she knows it’s important — especially at the 13th Floor.

“I think that makeup is one of the most important things with everyone’s costume. I love the fact that makeup ties everything together in a nice little bow that just completes the look. I think it’s just a really great way for pushing creativity and producing your own unique character. It’s an endless world where you can be creative,” she said.

View all posts by Marissa Kozma →