The Witches of BoCo

Witches! Terrifying in the popular imagination, so much so that we’ve literally murdered women for practicing it. But are they that scary? We talk to real witches to find out. 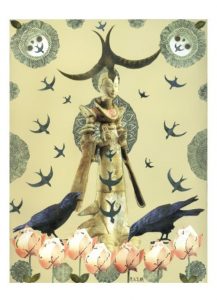 When doing research for anything I always turn to Google first. In this case Google failed me. I wasn’t able to find the information I was hoping to on the Wiccan community in Boulder County. So I reached out to local author, professor, and artist, Sarah Elizabeth Schantz, to talk about her experience with Wicca and some of her favorite shops and ways to celebrate. Sarah grew up in a mystery bookstore and down the street there was a used book that had stacks of Occult books. She also discovered the children’s writer Zilpha Keatley Snyder in that used bookstore. In addition to books and movies, a need to speak with the dead, with ghosts, ultimately brought Sarah toward witchcraft and then to spells and ritual. For my sister it was a want to explore her past lives, and the strong connections she felt to the craft.

Wicca, also referred to as Pagan Witchcraft, was founded in the 1950s by Gerald Gardner. It’s a duotheistic religion worshipping the Great Goddess and the Great Horned God. A common misconception is that the Great Horned God is Satan(Lucifer). This is not the case, as Wiccans aren’t Christian. When Sarah and I were talking about misconceptions about the community she mentioned she loves to tell people Margot Adler wasn’t only a big time radio personality and journalist for NPR, but a practicing witch (self-acclaimed Wiccan priestess) who wrote Drawing Down the Moon. She suggests (as do I) everyone read Drawing Down the Moon, or any late Margot Adler. The other thing more unique to her as a writer and a witch who was raised in a bookstore on the gospel of good literature is that first and foremost she believes in metaphor. Did Persephone really ascend from the Underworld after her descent? She loves the metaphors of this myth for spring, or rebirth, or even leaving Hades as a metaphor for getting away from abusive men. She loves how layered all the myths are. The idea of the third mind and of archetypes. That’s something interesting that comes up often in the ritual and practices of Wicca is the metaphors.

There are celebrations that revolve around the cycles of the moon, esbats, and the cycles of the sun, Sabbats. Many practitioners believe in magic and sorcery. Sarah’s favorite store is RitualCravt in Denver. She regularly buys online from them. She also likes Goddess Isis and Herbs & Art. If you’re in Boulder try Crystal Dragon or Lighthouse Books. You can buy money candles and printed magick from Sarah at: www.AnangkaArts.Etsy.com. Sarah usually celebrates in her farmland-surrounded yard where she’s blessed enough to usually have a bonfire too. They are not all specifically Wiccan, some are Wicca/Pagan there are several places that do esbats each month. In Denver you can celebrate at Hearthstone Community Church at The Althea Center, or RitualCravt. In Westminster there is a ritual off 72nd and Lowell. You can also search for a The Wild Woman project circle near you. This is the link for the Boulder one.

There is also the idea of casting spells and practicing magick online via Facebook or in weird unexpected places like at a Walmart. A dear friend of Sarah’s, poet CA Conrad does a lot of strange ritual in such places. He’s performed rituals in Walmarts before to channel the animals who were forced to relocate from the land, animals who are often on the verge of extinction. Sarah really likes the idea of using magick as activism. She’s a big believer in the idea of rewilding–for example when nature takes an area like a parking lot back by strangling it to death with weeds and earth. She, like many other Wiccans, believe they can use ceremony as a way to disrupt capitalism and corporate Amerikkka. If this sounds like something you may be interested in it’s not expressly Wiccan there is an interesting group that meets the last Sunday of each month off Jib court in Boulder. There is also the annual Witches Ball.

Sarah is also a novelist and a creative writing professor both at a local community college and via her own creative writing workshop series, www.WritesofPassage.org. Her novel Fig was selected by NPR as A Best Read of the Year in 2015 and won the 2016 Colorado Book Award. She is available to high priestess handfastings and other non-traditional weddings, as well as blessing ways for babies, or welcoming/naming ceremonies (pagan baptism), or most other specialized rituals you might need. She has even done a few exorcisms and cleansings. You can email me for more information and pricing at:

Thank you to Sarah Elizabeth Schantz for taking the time to speak with me. If you’re still wanting to know more about Wicca, the occult, or magick you can check out your local library, used bookstore, or check out RitualCravt’s schedule here.

View all posts by Shannon Smith →