Maybe if we could come up with a name better than cheek or head tacos. 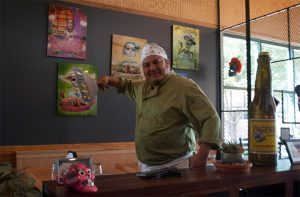 Chef Daniel “Dan” Flores is describing a wish dish for his restaurant, Lunada Eatery and Cantina in Lafayette. A wish dish is something he wants to serve but that for many reasons has not found a place on their menu.  Another of Flores’ favorites, tongue tacos, while a natural alliteration, suffers the same fate of a fat chance of making it menu-official.

It’s a shame because, despite the squeamishness of some diners, the beef is so flavorful and moist because there’s so much fat. Flores says he’s tried introducing the dish as a special but it hasn’t caught on. Monikers to market the delicacy shuffle through my head. What about smile tacos or sweet meat treats? STOP.  No one wants to see how the sausage made goes the old adage, but they do want to taste the entrees at Lunada where Chef Dan can be found in his signature bandana. The colors change depending on the day. Is there a deeper meaning? A kind of mood ring for the chef perhaps? No wild story there, nothing is better at keeping my hair out of my eyes. That’s it.

Chef Dan grew up with fond memories of his mother’s pozole and tamales she would make in large batches. She was a single parent who always had confidence in him and would reinforce that he could do anything he wanted to. She would say, “Work hard and you’ll get to where you need to get to.” Flores recently returned from a trip to Chicago and is itching to get back. “The food scene there is incredible. The entire city is incredible.”

Speaking of cold Midwestern locales, Flores spent eight years in Duluth, Minnesota and recalls his time there fondly. I once heard someone describe Duluth as “better than it thinks it is” and, having spent time there, Flores talks about a “beautiful city” and that his time was positive. Despite economic downturns, Duluth has a lot of people, like Flores, who overlook the shabby exterior and see a town that is poised for a bigger things.

When asked about favorite places, there’s none better than home for Flores. He has two older children in their twenties and a four year old who he can’t wait to see after a long day at Lunada. Chef Dan was a single parent for seven years and when asked if he felt it affected his trajectory from working construction to now co-owning a restaurant he replies, “Maybe. I think I always wanted to be in the restaurant world. I didn’t know it would be as an owner too and that’s a blessing. From the age of nine or so I was baking cakes and trying to make pancakes while my older brother was the one helping with the daily meals. Maybe it makes you more determined, more focused when you know you have to squeeze so much in. There’s sports practice, Saturday games, getting their meals prepared, reading to them at night, and helping with homework. No time to mess around.  It was a structure that helped me make something happen for myself.”