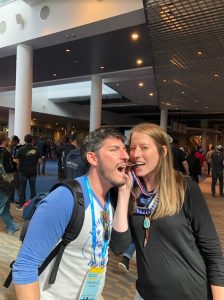 The 38th edition of the Great American Beer Festival (GABF) took place at the Colorado Convention Center on October 3 -5. As always, it was a massive, suds-soaked three days. 800 breweries and 4,200 volunteers poured 4,000 beers to 60,000 people. On top of that, breweries entered nearly 9,600 beers into the festival’s competition which was the high point of the event for both brewers and serious fans. Check the online article for more pictures of the event.

Even in this crowded setting, Boulder County and its beers stood out. Eight area breweries took home twenty percent of Colorado’s GABF competition medals (40 total for CO). The medal haul is notable for both its strong showing and for how the styles were some of the toughest beers that brewers make. County breweries won for experimental beers and for deceptively simple styles that show their flaws if they’re not brewed perfectly. The medalists are some of the most unique representations of craft beer that you’ll find anywhere.

For brewers, these awards are the equivalent of the Oscars or Emmys in the entertainment industry. Not only will a win burnish a brewer’s resume, it can also put a new brewery on the map or draw attention to breweries that the public takes for granted.

There are two  examples of this from within the last five years. One is Greeley’s WeldWerks Brewing. It was awarded for its Medianoche Imperial Stout in the Wood and Barrel-Aged Strong Stout category in 2017 and is continuing to stand among giants in the beer community. It medaled again at this year’s contest.

Another dramatic GABF awards story comes from Denver’s Former Future Brewing Company, now known as Black Project Spontaneous and Wild Ales. After winning its first medal in the Experimental Brewing category, the brewery garnered immediate attention as an industry leader. There were long lines for taproom pours of the beer in the days after GABF, and extended lines for premium beers that the brewery released later.

If you’d like to seek out this year’s award-winning Boulder County beers, act fast. In most cases, they don’t last long in taprooms after the festival but it’s worth a try to still find them.  At the same time, if you’re out of luck it is likely you’ll find something else from the brewer that is equally well made but simply wasn’t part of the festival. Medal winning breweries don’t just make good beers, they generally make strong beer lineups too.

Northstar Imperial Porter, Twisted Pine Brewing Co., Boulder. This is a malty, big-bodied beer featuring dark fruit and chocolate flavors and a 9.4% ABV. It is a testament to the ongoing abilities of a brewery that has been honing its technique for more than a quarter of a century.

A light, easy-to drink beer with a pilsner-malt body and German hop aroma that doesn’t overwhelm.

This spontaneous beer is naturally carbonated with a local alfalfa honey as the priming sugar. It is the first bottle-packaged release from this brewery which is known for spontaneous blended and aged beers.

Upslope Craft Lager, Upslope Brewing Co. – Flatiron Park, Boulder. An easy-drinking lager with a bright, fresh finish and a 4.8% ABV that includes a touch of snowmelt in the brew. It is widely available in cans throughout the year.

This is a corn-based version of the brewery’s Elkhorn lager, a rich, dark and malty beer that’s regularly available in their taproom. It is full-bodied with roasty grain notes and a slightly crisp finish.

This beer is the brewer’s house wild Saison and made with several types of malt. It is also lightly dry-hopped and then aged on oak barrels.