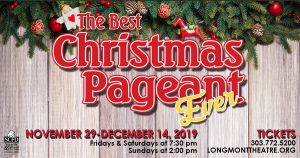 3 Questions about The Best Christmas Pageant Ever

In The Best Christmas Pageant Ever a couple is struggling to put on a church Christmas Pageant and they’re faced with the very worst kids in theatrical history. Mayhem ensues when the troublesome kids collide with the well-known Christmas story and an ever-popular holiday play was born. Based on the best-selling young adult book, The Best Christmas Pageant Ever is being presented by Longmont Theatre Company from November 29 through December 14 and presents a fun opportunity for families with kids of all ages to enjoy a live theatrical holiday tale. Yellow Scene Magazine had a few minutes with one of the producers for the show, Tracy Cravens, to get a little more info about what you can expect.

Yellow Scene: Tell me about the decision to bring this show to Longmont for the holiday season.

Tracy Cravens: It involves children! Children-oriented shows during the holidays are just good for families. Plus, so many people have loved this story from their childhood. Who doesn’t remember the Christmas pageant at church as a kid?

YS: What can audiences expect when they see this show?

TC: A timely piece, in a rural town church. There will also be an amazing quilt that (looks like) stained glass windows as the backdrop and we’ll be auctioning that off during the run.

YS: What else is on the horizon for Longmont? What can we look forward to?

TC: There is a lot coming up, including: Exit Laughing, The Odd Couple and The Producers. We’ll be offering movies as well, including; Beetlejuice, Hocus Pocus, Babettes Feast, Die Hard and It’s a Wonderful Life.

The Best Christmas Pageant Ever runs at Longmont Theatre Company from Nov. 29 – Dec. 14. Tickets are just $10 at longmonttheatre.org or by calling the box office
at (303) 772-5200. Longmont Theatre is located at 513 Main Street, Longmont.

Gasoline Lollipops frontman Clay Rose grew up a punk rock kid with a mohawk and hippie parents in the denim-and-chaw drenched environs of Franklin, Tennessee. It was music that saved him, he said in an interview with Yellow Scene earlier this year. “My sister turned me on to the Violent Femmes and Tool and things like that, but the punk rock thing — West Coast punk rock —I loved it from the first time I heard it… It sounded like freedom,” he said. “It was so anthemic, and the driving drums would kinda imbue you with courage. It gave me the courage and attitude to fight back in a place where I was constantly having to defend myself.” That mindset permeates the alt. country act’s sound, and makes it a perfect background for New Year’s Eve at the Fox Theatre in Boulder.

As one of the most popular of Shakespeare’s comedies, A Midsummer Night’s Dream has been performed all over the world. The story is about the events surrounding the marriage of Theseus, the Duke of Athens, and Hippolyta, the former Queen of the Amazons. These events include the adventures of four young Athenian lovers and a group of six amateur actors who are controlled and manipulated by the fairies who inhabit the forest in which most of the play is set. This whimsical classic comes to Boulder audiences thanks to the Upstart Crow Theatre Company, under the direction of Katherine Dubois Reed. It runs Nov. 21 – Dec. 1 at The Dairy Center for the Arts, 2590 Walnut Street, Boulder. Tickets are $25 at www.theupstartcrow.org or 303.578.5667.

Sound and spectacle is what makes local rock trio FaceMan a unique fixture in Colorado. From a 100-band, one-day festival to a model of a megalodon — full-size, mind you — for them to stand in while playing a show, the Wilco-meets-Ween indie rock outfit just gets it. Great songwriting, paired with just enough absurdity is what makes people take notice. And for three years, their insanely overlit Parade of LIghts is a perfect example. For this one, they unload a metric ton of sparkling Christmas lights and turn Ophelia’s in Denver into Clark Griswold’s greatest dreams. Joined by sister act Tivoli Club Brass Band, this show is an unforgettable perennial delight.  Dec. 20, 8 p.m., Ophelia’s Electric Soapbox, 1215 20th St., Denver. $15, opheliasdenver.com.

A Christmas Carol at Dairy Center for the Arts

There may be at least five different local theatre companies offering up versions of this holiday classic, but when it’s under the care of Boulder’s Ensemble Theatre, you can bet it will be a strong production. A Christmas Carol is about as holiday-classic as you can get, and many families seek out the show for their own annual traditions. Boulder audiences can enjoy this version adapted and directed by Rebecca Remaly, which promises to be fun, funny, frightening and fantastic. The show runs Dec. 5 – 28.  Tickets are $22.50 to $38 at www.betc.org or 303.444.7328. At  the Grace Gamm Theater, Dairy Center for the  Arts. 2590 Walnut Street, Boulder.

Santa Claus Conquers the Martians at The Bug Theatre

If you’re looking for a family-friendly holiday tale unlike anything you’ve seen before, you’ll want to book your tickets to catch The Bug Theatre’s production of Santa Claus Conquers the Martians. Adapted from the 1964 cult film, this production features both live staged performances and pre-filmed segments to bring the cult hit to vivid life. It tells the story of Santa Claus who is kidnapped, along with two children from Earth, by aliens from Mars. The Martians want Santa to provide his brand of cheer and merriment for the children on Mars but, of course, it does not go as planned. Enjoy this new holiday show with the whole family