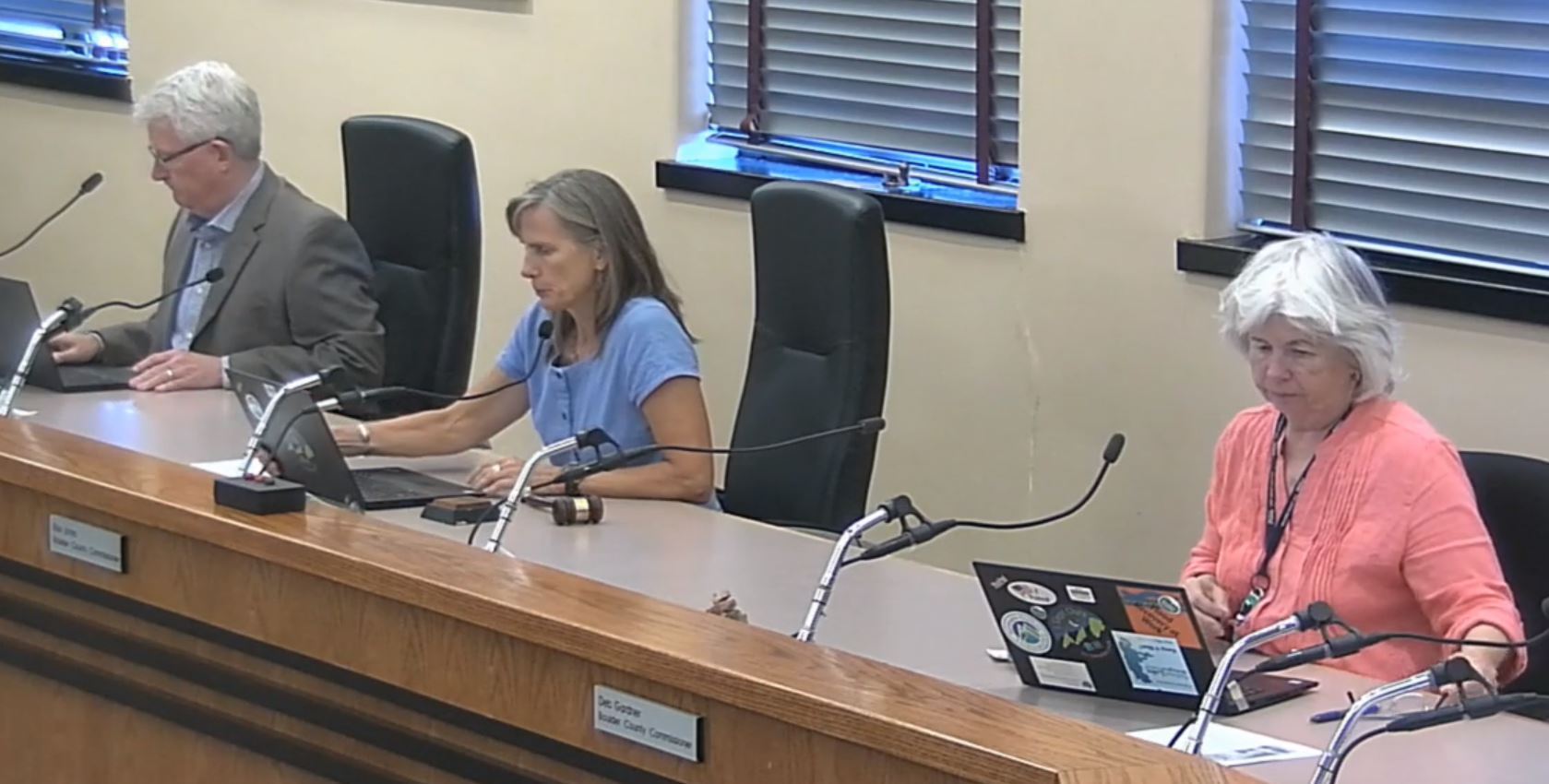 Eight-five percent of the carbon now present in the atmosphere is the value added during the course of my lifetime, 2.5 trillion tons, roughly equivalent to one thousand times the total weight of all the fish in the sea.  _Lewis Lapham

Be the Change is of the opinion that Boulder County has no choice but to invoke at least a temporary ban on the practice of hydraulic fracturing, or fracking within the county.  This ban should remain in place until such time as the state develops inventories and science-based standards for the protection of public health and safety as required under SB 181.  Those studies and science-based standards do not now exist.  Most, even after almost a year of the law’s passage, are set for public debate and rulemaking well into the future.  Some have not been scheduled at all.

Among the more significant requirements of SB 181, which the state has thus far failed to address, are these:

Setbacks.  There is no question that fracking poses a threat to human health and the environment.  The 6th edition of the New York Compendium (2019) finds, in an inventory of over 1778 articles published between 2011 and 2018, that:

A follow-up analysis… found that 90.3 percent of all original research studies published from 2016-2018 on the health impacts of fracking found a positive association with harm or potential harm.

These statistics and trend analyses are truly alarming and in scientific terms, might even be considered consensus agreement.  Just as alarming is the fact that we don’t really know at what distance fracking’s poisons disperse enough to become safe to humans, if indeed such a formulation is even the right metric in the present poisoned air and climate crisis.

A recent fracking study commissioned by the CDPHE purportedly shows benzene could sometimes be at dangerous levels to humans up to a distance of 2000 feet.   Our review of the study indicates that while the study impact analysis stopped at an arbitrary 2000 feet, the impacts in the simulation model certainly did not.  In fact, under a worst-case scenario health impacts went well beyond 2000 feet and might be measurable as hazardous up to several miles.  (See study discussion and graphs at pages 125 through 131.)

The Polis administration has declined to modify its public posture concerning the study results. As a result, we think Boulder County should ask for an independent review of that study by the accomplished climate scientists at CU and NOAA, many of whom live in Boulder County.  This would have to be an official request, we feel, for it to be seriously received and honored.

We note that at the recent health and climate debate in Denver, which Boulder County sponsored, Dr. Gabrielle Petron, NOAA, showed a slide of actual benzene measurements at a fracking site in northern Colorado.  During flow back the benzene reading was well over 600 ppb. This reading is many times greater than anything the CDPHE study measured.  Moreover, another recent study shows that benzene releases from even low producing wells can be quite high.  Over 70 percent of the wells in this state are low- producing stripper wells.  Benzene is a killer, a carcinogen, The World Health Organization’s human exposure standard for benzene is 0 ppb.   The hazard standard used in the CDPHE study was, we believe, 9 ppb.  Clearly, an independent review of that study and its conclusions are called for.

Most importantly what is needed, before renewed drilling could even be considered for Boulder County is comprehensive real-time air monitoring of oil and gas production in this state.  As is well understood, thanks to Boulder County’s continuous air monitoring station managed by CU’s Dr. Helmig, fracking in Weld County has a significant impact on air quality across the entire northern Front Range.

The county should use its offices to encourage state-sponsored independent monitoring and analysis.  Presently, the state relies on industry reporting to calculate the industry’s GHG contribution.  Bruce Finley reported in the Denver Post this past week that “more than 125 million metric tons of hazardous and heat-trapping gases pollute the air over Colorado every year.”  This is extremely important information, but even so it probably under reports the contributions from oil and gas exploration and production, since we only have the industry’s word, and the calculation for industry releases is based on a discredited EPA ground-up formula that has been said to underestimate industry pollution by at least 50 percent.   Real-time monitoring will allow for reliable testing of the accuracy of these numbers.  Dr. Petron’s measurements of actual benzene releases at a frack site suggest the divergence between estimated and actual releases could be quite great.  Dr. Helmig’s important real-time monitoring for Boulder County suggest GHGs are going up, despite the state’s assertion to the opposite.

Air  Quality:  SB 181 requires a cumulative impact analysis of fracking’s impacts on air quality.  Continuous monitoring of large emitters, and continual monitoring of smaller emitters is mandated.  We, and others, have suggested flyovers as the most cost-effective way of developing a GHG inventory and identifying emitters, large and small.  The state, despite a proposed budget of almost $33 billion, says it doesn’t have money for periodic flyovers.  A muscular flyover program could be developed for  $500,000 or less.  That is less than 2 thousandth of one percent of the state’s budget.   This makes the Governor’s repeated public pronouncements that we must reduce our GHGs ring hollow, for you can’t manage what you don’t know or understand.

Real data collection as required by SB 181 has not begun, though continuous air-monitor rulemaking is now promised sometime this year.  Implementation could realistically be a couple of years out.   Without it and verifiable measurements of pollution from small emitters, we are once again dependent on the honesty of the polluter to tell us how much they are polluting.

Just as importantly, HB 1261, also enacted last year, requires the state reduce its GHGs by 26 percent in 2025.  This is roughly the same percentage that the United States agreed to at the Paris Accords in 2016, an agreement Mr. Trump has now withdrawn us from.   HB 1261 calls for a 90 percent reduction by 2050, but the IPCC is now saying that to have a better than even chance of remaining below 1.5 degrees Celcius we must reach net-zero in GHG emissions by 2040.  Urgency is missing in the political world.  Posturing is preferred.  As a consequence, remaining below1.5 degrees Celcius becomes ever more difficult. Dr. Helmig’s research shows our GHGs are probably increasing on the Front Range and that continued new drilling is probably the root cause.  2109 well permits were approved last year.

Adding to why a ban is the only reasonable approach for Boulder County until much more is known, is a recent landmark paper by a team of international scientists.  They warn “that beyond 1.5 degrees Celcius, the biology of the planet becomes gravely threatened because ecosystems literally begin to unravel.”

Of the 746 square miles that constitute Boulder County, roughly half appear to be forested land within the Rocky Mountains.  Last year wildfires in the state cost about $130 million to contain.  If the average global climate temperature were to increase to 2° Celsius, a 656% increase in annual area burned in the Colorado Rockies is predicted.  But even so ecosystems appear to be unraveling already. The recent fires in Australia are estimated to have released over 400 million tons of heat-trapping CO2, almost doubling the continent’s annual man-made CO2 emissions, and three times the estimated heat-trapping gasses polluting the air over Colorado, as reported in the Post.  The fire also killed an estimated 1 billion animal species.

We in Colorado cannot control global climate change, but we can do our part to contain it by not acting foolishly to approve continued fossil fuel development that is undeniably the core of the problem.

Water use: We add fuel to the looming inferno if we allow our water to be used for fracking.  SB 181 mandates a cumulative impact analysis of water use for fracking, and of course the long-term impact on our water supply with continued fossil fuel development.  In 2019, about 2109 wells were approved.  The water demand for these wells can be estimated at about 8 million gallons per well. At this average, the fracking industry would have used and destroyed roughly 17 billion gallons of water last year to frack the 2109 permitted wells. We say destroyed because fracked water is so polluted that, once used, it is injected into deep underground reservoirs that were once oil wells with the expectation that the poisonous waste will never reach useable groundwater or that the often heavily saline groundwater with which it is mixed will never be needed for human use.  Compared to the roughly 7 billion gallons of water Boulder citizens use annually, the water required for the 2109 wells is about 2.5 times greater, and remember well over half of Boulder’s municipal use goes back into the water system once treated.  Fracking water, 100 percent of it, is destroyed, though it could be cleaned up for reuse, but only at extreme cost.   The political class has decided we can better suffer the loss of our water than the industry can afford to treat that which it has polluted.

Looking at fracking’s water destruction from a slightly different angle, 17 billion gallons translates to 52,000 acre-feet. This is twice the storage capacity the county owns in Boulder Reservoir. The Gross Reservoir enlargement, which Boulder County opposes for many good reasons, is projected to deliver an annual yield of 15,000 acre feet, though climate change is not adequately accounted for in these yield calculations.  The estimated cost of expansion is about $.5 billion.  Clearly when the state is telling us we are going to be water short in the near future, the continued destruction of the people’s water by the oil industry is senseless and unsustainable.

The foregoing narrative should convince every sentient being in the state that fracking is a threat to the public and the planet.

Alas, there are too many in the political class, either through timidity, ignorance, or corruption, or some combination thereof, that deny the obvious.  Given their willful denial and the money power the oil industry and the investor class wield, resolution of the issues discussed above can only be resolved to the benefit of the people and the planet with more scientific evidence so that even in the darkest recesses of the earth the dangers continued fossil fuel development constitute shine bright.

View all posts by Phillip Doe →