Off Menu with Hosea Rosenberg

Hosea Rosenberg and Blackbelly are changing the way we see meat while serving up straight up good food with simple ingredients. 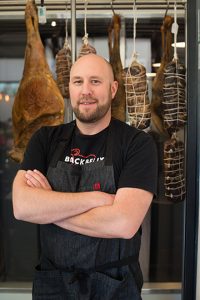 Let’s forget about farm-to-table for a moment and focus on ranch-to-table. Hosea Rosenberg, founder and owner of Blackbelly and Santo, is, of course, a Top Chef victor, but he’s also currently on a crusade to bring back and modernize the old world style of butchery. Blackbelly, renowned restaurant house, is Boulder’s very own independent, artisanal, and whole animal butcher shop where Hosea and his team are on a mission to provide Boulder with high-quality protein while expanding our palette beyond the traditional prime cuts.

If Hosea isn’t cooking at the front amongst the “fire and the knives”, as he describes it, he’s probably filling in for any and all roles that need it. If there’s no dishwasher, he’s there. No line cook? He’s there. Prep? You know it. For Hosea, the game changed by starting his own businesses; what hasn’t is what’s required to succeed. He understands that humility and unity within the kitchen is the only road to success. “It really comes down to if they want to come in and kick-ass, so we ask everyone to work hard, to work clean, to work efficient[ly] and to treat each other with respect,” he says. Good food and quality service are the product of that mindset, for Hosea. He goes on to say that without, “the right attitude, the food is going to suffer, even if you have all the technical skills.”

For Hosea, unity comes from hard work and teamwork. Often implementing military-style or football team lingo, he works to bring all the members of his staff together by emphasizing pride and reward through proper execution. He believes in ‘lifers’, himself being one; a lifer is someone whose passion goes beyond the mere summer job or paycheck. It’s someone that places dedication and soul into their culinary creations providing an experience for the patrons. For a lifer, cooking isn’t just a means to an end, but an end in itself, a proper way to fulfill life’s professional requirements.

Over the years, the fuel has remained largely the same. His love for the restaurant business, the passion he feels for the notoriously hard work it provides, and the relationships amongst his crew are only matched by the one thing that has changed from his early years, his family. “I have a family to support now, that’s part of my drive, to make sure that they know that we’re all going to be okay, that the businesses will flourish and everybody’s going to succeed and [that] we’re building something really amazing that will last for a very long time.” At his core, Hosea is a chef, even just from our conversation, it’s obvious, cooking, creating, providing culinary satisfaction and bliss seeps through his very being, as he changes and molds for us how we see and think about high-quality food.

Blackbelly prides itself on good food. They mainly use local farmers and ranchers to supply their ingredients. To a certain degree, Hosea is dependent on them, the land, the supply, a semi-revolutionary concept of living and existing largely within one’s maneuverable environment. “We let farmers dictate what they produce and then we write our menu based on that availability.” As for the wintertime, many farms will use greenhouses to keep up with demand, but the cold months can be hard to acquire everything the business needs.

Part of this local operation is the protein. The Butchery at Blackbelly is a beast of its very own. A shining emblem of old-world style right here in the modern era. Colorado is known for some of the best meat in the country, especially lamb, so using it is a no-brainer. For many of us, it’s the prime cuts that we know and – for the most part – have access to. Hosea is changing that by using the entire animal. By butchering the animal in-house, offering courses, and allowing customers to experience the wide range of cuts that are hard to find in other grocers, Hosea and the crew at Blackbelly are changing the way we see meat. From Bavettes, liver, or bone marrow, they’re expanding our horizons. “There’s a lot of muscles in an animal, and tenderloin is [just] one percent of the weight of the whole cow” Hosea tells us. Providing consumers a larger variety brings us closer to the animal that we’re consuming, brings us sustainable solutions to the meat industry, and emphasizes the importance of high-quality local products.

Whether you’re there for their breakfast burritos, their pan-seared scallops, or a freshly cut hanger, the message is the same: good food requires great ingredients and a great chef.