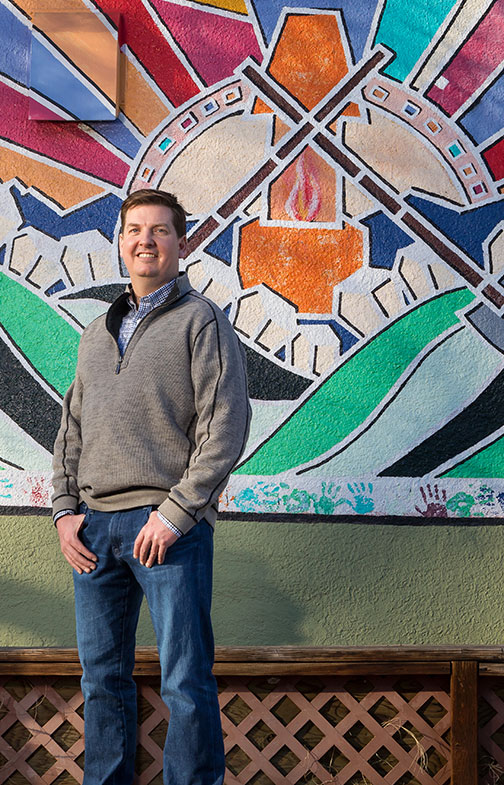 Genetically, you get your smarts from your momma. Or so I’ve heard. In our case, we get it from our great, great, great (insert however many editors we’ve had) grandfather, our very first editor, Erik Maulbetsch, and every editor since. Erik “moved to Colorado right after college” he tells me. Erik and three friends, young and adventurous, moved to Breckenridge, Colorado, “to ski, live in the mountains.”. Smart, savvy, generally uninterested in a nonsense career, he went from working a resort real estate sales job (“it was not my thing”) to an attempt at selling ads for Summit County News, where he lasted three days of training before moving into the area that would hold him for life: writing.

Erik was the first editor of Yellow Scene Magazine, remembering that he never ended up writing for Summit because he moved with a girlfriend to Boulder where she’d attend CU. “I started looking for work,” he recalls, in a Boulder County population a mere 267K people in 2000, to today’s 350K. “Shavonne was hiring,” he remembers, “and I had an interview in her condo and she said, ‘you’ll be the editor’ and that’s how we started.”

A giant jump for a humble kid, the smarts saved him, the refusal to fail directed him, and a couple of meetings with local managing editors (including at Boulder Weekly and with Shavonne’s old friend Joel Dyer who was up in Ft. Collins at the time) guided him. It was his first time editing, a first time in that kind of position, which is a stark parallel to my own work today. Shavonne has always been good at seeing uncultivated talent, giving chances where others would say, “come back when you have more experience, kid”.

As our publisher puts it today, he was the bedrock, he and Shavonne worked together to created our style, and we’ve been winning awards, launching careers, and being community focused with an eye on politics ever since.

Back then we were as bareboned as we are today and Erik was required to not only learn on the job, but learn multiple jobs: copy editing ads, research, writing articles, photography, staff management, assignment letters, and editing. “It was just sort of jack-of-all-trades,” he says. I like that quote. We often forget the whole of it:

I have to admit, Yellow Scene wasn’t my first editorial work, but I’d never had professional experience either. At Riverside City College I was a section editor for the Viewpoints, our campus paper. We even won a Pacemaker while I was there. Sitting with Erik and joking back and forth about how hard deadlines are, how much work goes into this job, the eternal list of things to learn and do, and how tough Shavonne is, made me feel good. And I’m sure it felt the same for Erik, knowing he is the formative element to who we are today, that not much has changed in the intervening 20 years, that he set us on a path to greatness. 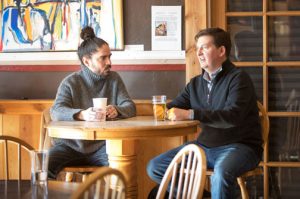 All images by Paul Wedlake for Yellow Scene

“It was intense, and I was editing people for the first time… I was trying to figure out what people’s styles were. All the other components of it… Learning so much on the job,” Erik recalls.

Listening to the stories Erik told is the best part of going back to the roots. Things haven’t really changed: different day, same deadline crunch. He recalls writing about HOA’s and the issues communities faced as communities grew. He remembers our bread and butter being arts and live music, which is why we met at Cannon Mine Coffee, a place he frequented back then for the live performances. He laughs remembering the national hoopla of “Freedom Fries” under the GWB administration. “I made a joke about it and one of the advertisers got mad,” Erik laughs. “I remember Shavonne coming up to me and saying, ‘Just so you know, this advertiser bought a half page ad every month for the last two years. Don’t worry, I’ve got your back on it,” reminding me of the constant office refrain that we have a great wall between advertising and editorial. There’s no other way to do honest journalism.

Erik is a reporter and researcher for the Colorado Times Recorder today, and worked for the ACLU for over a decade. He focuses on politics at the state and federal level. At the time of this writing, his last article was on the local Weld Sheriff being anti-science, suggesting he’d “rather take my chances with the virus than socialism.” It’s good to know that, even if not at Yellow Scene as editor, Erik’s work still impacts us, still covers us, and still has roots with us. That’s local journalism.