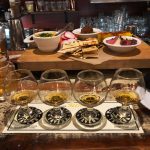 What do whiskey, a brewstillery, a new brewery, cocktail seltzer, and event tickets have in common? They all came to Boulder County this March. Yup. There’s been a lot going on in our area and we’re excited to share it with you.

Review: Damn near Impossible to find Whiskey at the West End Tavern

On March 11th, drinkers had access to some of the first sips of West End’s Special Reserve Single Barrel Whiskey made in a partnership with the W.L. Weller, the sought-after label from the Buffalo Trace Distillery.

As part of the event, the Boulder institution created a flight of other rare Weller selections including their 2018 CYPB, short for Craft Your Perfect Bourbon, an offering that was developed online with customer input. Finishing the tasting was the distiller’s Full Proof and 12 Year whiskeys. Each of them was paired with a tasting plate that had smoked steak, falafel, pork belly, jalapeno cornbread to match the whiskey flavors.

The evening was hosted by Buffalo Trace’s James Germain, who provided detailed tasting notes to a full upstairs dining room. Some of these offerings are still available for anyone able to stop by.

New in Town: A Brewstillery, a New Brewery, and Cocktail Seltzer

On March 16th, Boulder welcomed its first brewstillery as Ska Brewing and Palisade’s Peach Street Distillers come to the neighborhood in the former Fate Brewing location on Arapahoe. According to a press release from the company, the location houses a 10-BBL brewing system and 450-liter still. That roughly translates to 30 Ska beers on tap and a mixology program that brings what’s available at the Palisade distillery to Denver. There’s a full food program too, with Caribbean-inspired plates that represent a farm-to-table approach.

On March 14th, Boulder welcomed another new brewery, and we’re not complaining. Uhl’s Brewing Company and Tap Room has set up shop at 5460 Conestoga Court. They’re planning to focus on some of the biggest beers they can. Think huge IPAs, stouts, and barrel-aged ales. You may know these guys already, as brews have been available through in-store sales only – up until now.

When you’re out and about, keep your eyes peeled at your favorite liquor store as Shorts Brewing Company out of Michigan announced they’re bringing their Beaches Cocktail Variety Pack to our area.

How is this seltzer different from others? So far, most options have been made with berry and primary fruit flavors, but Shorts’ seltzers should remind you more of cocktails. Think Margaritas, Mojitos, and Pina Coladas.

For the health-conscious, this may be your drink for the spring and summer. Each serving is under 100 calories, with just 4g of carbs and 4% ABV, so you can feel free to indulge.

Microbrews for the Environment Ticketsare on Sale

If you’re the type to plan, you’ll be glad that we told you that tickets are on sale for the 28th annual Microbrews for the Environment at the Boulder Theater. The combined concert and brew fest on Friday, April 24th. It’s a great time to get together with a group of likeminded people where you can enjoy music from Lonesome Days and The River Arkansas with special guest Flash Mountain Flood. Oh, and did we say that they’ll also be more than 15 area breweries sampling what they’ve got?

Planning committee member SarahDawn Haynes, Alumni Coordinator at the CU Environmental Center, told us why she’s still excited about the festival even though it’s been happening for nearly three decades. “This is a really good event because of the range of people involved: alumni, Colorado bands, area brewers, and our long-term supporters, she said. ” For us, this is an event tradition.”