Orgins and Dissemination of Cannabis Throughout the World: A Brief History 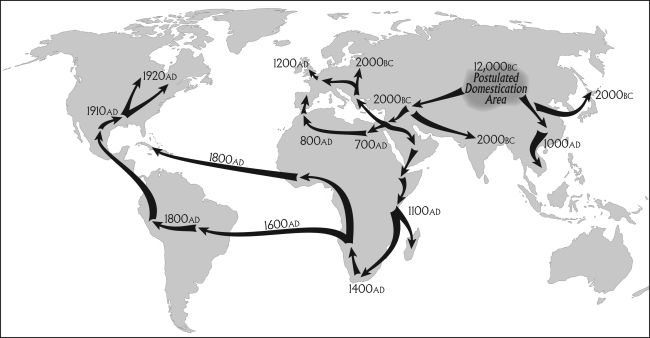 The cannabis plant has been used by humans for thousands, possibly tens of thousands of years.

Surprisingly, it has been illegal for less than 1% of the time since humans first documented using it. Carl Linnaeus was the first to classify Cannabis sativa in 1753. Jean-Baptiste Lamarck identified Cannabis Indica and published these findings in 1785.

Cannabis is in the cannabaceae family.

Cannabis is a genus of flowering plant and was placed in the Cannabaceae family by Stephan Endlicher, an Austrian botanist, in 1837. Cannabis ruderalis remained unidentified until 1924. While the precise origins of cannabis are not completely known or understood, we have been able to uncover a greater degree of detail in more recent years.

Cannabis has been cultivated and used for at least 12,000 years, although recent evidence suggests it was first used at least 30,000 years ago. The plant enjoyed an almost uninterrupted run throughout history as practically every society recognized the benefits of the plant for medicinal and recreational purposes. Recently researchers reviewed over 150 fossil pollen studies in Asia. According to their findings, the team announced that Cannabis and Humulus diverged around 27.8 million years ago. The team also discovered that the oldest Cannabis genus was found in China and, according to their research, was approximately 20 million years old.

The global spread of cannabis.

The cannabis plant then dispersed into Europe around six million years ago. Cannabis pollen probably didn’t appear in India until just over 32,000 years ago. Meanwhile, hemp rope that was found in what was formerly Czechoslovakia was dated to around 27,000 years ago. These discoveries raise the question of whether Cannabis was first used as a multipurpose crop, or whether the domestication of hemp and drug-type Cannabis proceeded independently. Regardless, cultivated drug-type Cannabis was spread from Central Asia and/or India to Africa, the Middle East, and Southeast Asia by Arab and Hindu cultures between 2,000 and 500 years ago. It has been claimed that the Jamestown settlers brought the cannabis plant  to North America in 1611. Throughout the colonial period cannabis fiber remained an important export.

Where did the variations come from?

While cannabis is now recognized as its own genus of plant, scientists are unable to agree on how the breakdown from genus to variant species occurred. One suggestion is that environmental changes caused the appearance of different cannabis species. The truth is that there are far, far fewer distinct cannabis cultivars than all these silly names would lead us to believe. There are probably less than thirty distinct Type I chemotypes (varieties that primarily produce THC) popular today.

Cannabis was sourced in nature.

Before the emergence of Dutch seed companies in the late 1980s, underground growers either sourced their seeds from local farmers or breeders, or from imported cannabis. In today’s global market, “clone-only” varieties carpet the world, spreading a lack of genetic diversity while increasing a myriad of potential agricultural problems in terms of susceptibility to disease and intolerance to imposed environmental stresses. Therefore making weaker genetics.

This chemo-typical variation is due to classes of chemotypes producing different amounts of terpene essential oils, some of which modify the effects of THC and can produce different psychoactive effects. What’s unfortunate is that if more informed breeding were used the market could produce much more variation in these Type I varieties. As a consequence, present-day commercial cannabis crops are most often grown from cuttings instead of seeds, and they are increasingly cultivated indoors under artificial light rather than under the sun.

One day we may be able to map global cannabis genetics.

Cannabis has made its way around the globe hundreds, thousands and – some even claim – millions of years ago. Despite genetic gaps and potential shortfalls, this plant isn’t going anywhere anytime soon. As legalization continues to spread across the globe, more research and discoveries will come to light. In addition, as science begins to truly understand cannabis, genetic improvements will continue to be made.