Black is Beautiful at Outworld Brewing 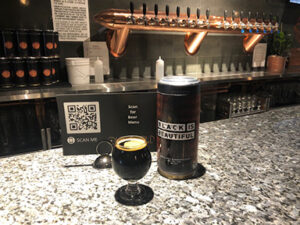 From the moment you walk into Outworld Brewing’s dark, 8,000 square foot space – with vintage Star Trek episodes playing silently above the bar – two things are clear: The brewpub caters to sci-fi/fantasy fans and it isn’t afraid to do things differently. They’re also solid enough to hold up to the tough expectations faced by any new Colorado brewery.

Outworld’s beer menu is ground zero for understanding their creative approach. It stays solid enough to hold up to the tough expectations faced by any new Colorado brewery, especially in Longmont, home of behemoth beermakers Oskar Blues and Left Hand. It’s also unafraid to venture into the experimental side of brewing.

Case in point is a Vienna Lager that swaps out a conventional brewer’s expected barley grain choice, for rye. The result is smooth, crisp, and drinkable. Taking exploration further, there’s a Belgian IPA made with local honey, lemongrass, coriander, and cumin. While you’d expect the spice to be more prominent, it plays seamlessly with the other flavors and blends into the beer’s finish. It’s why you like the beer, but you hardly notice it.

This experimentation is thanks to Mike Hall, Outworld’s brewer, who has worked throughout the U.S. and has rubbed shoulders with everyone in the industry, including Brooklyn Brewing’s Garrett Oliver. When you first meet Hall, particularly as he wears a COVID-19 protective mask that ends just above his large beard, he looks like he could either hold up a bank or make beer. When you share a glass with him, you’re glad he picked the second.

While geeks may be comfortable here, drinkers with solid beer standards have good reason to stick around.

One of the best things about Outworld is how they make their differences work for them. Like every other brewery and restaurant, they had to bend over backwards to meet a range of requirements to open safely given CIOVID-19. The brewery’s owners realized that their existing tables, which they call “escape pods” in a shout out to a space-travel theme, met some of their requirements for them.

Each section in the escape pod functions as the perfect socially distant areas for drinkers. With floor-to-ceiling metal wall enclosures surrounding the tables, there may be no other place in Boulder County – or on the Front Range for that matter – where you could enjoy food and drinks in such a protected environment.

In a time when citizens are focusing on supporting Black and minority-owned businesses, it is important to note that Outworld is Longmont’s only Black-owned brewery and one of just three Black-owned breweries in Colorado at the time of publication. This year on Juneteenth, they announced participation in a brew to support the Black Is Beautiful initiative, which was created by San Antonio Texas-based Weathered Souls Brewing Company. Weathered Souls asked breweries everywhere to brew a single stout recipe with their own twist in order to raise awareness for the injustices people of color face daily.

Outworld is in good company in joining the brew. 1,030 breweries in the U.S. and abroad are taking part, and that number is continuing to increase. 27 of these are in Colorado including Avery Brewing, Left Hand Brewing, Odd 13, and WeldWerks. All breweries are required to donate profits from their brew to an organization that is fighting injustice and Outworld is still finalizing their choice of a recipient.

Outworld’s take on the recipe is a complex chocolate-forward imperial stout weighing in at 9.50 ABV. If you let it warm up – and you should – you’ll be treated to a taste of mandarin orange in the finish. It’s available at the bar or to take home in 32oz crowlers.

The brewery’s Co-Creator, Jeremy Williams, talked about what being part of the brew meant to him. “Weathered Souls allowed for a platform for all breweries to be able to support the community and talk about things that have been in the background for some time. It’s about helping to make a change right now. To fight for equality for all people. It’s beyond excellent. Beyond kind.”