Boulder Police Officer Waylon Lolotai is alleged to have an Instagram account, @tacticaltoa, on which he speaks positively about police brutality and violent “use of force Fridays”. This includes his (alleged) comments about an officer punching a man another officer already has in a chokehold: “Atta girl, doing work on that suspect, dropping hammers.” In response to a commenter calling this excessive force, Lolotai (allegedly) writes, “it made me happy that she was dropping bombs on his stupid face.”

Boulder City Attorney Tom Carr has referred to Lolotai as “an excellent officer who does a great job.” This “excellent officer” is now on paid administrative leave. Lolotai’s alleged Instagram account came to the attention of Boulder Police via a video on the SAFE: Safe Access For Everyone Facebook page.

Since he was hired in 2016, he has brutally assaulted two women, as well as a Black man, Sammie Lawrence IV, who clearly and repeatedly shared that he was disabled. One of the women, Kelly Clark, was unsuccessful in suing Lolotai and the City of Boulder.

That was then, this is now.

The killing of George Floyd has driven our nation to the streets. Locally, Aurora Police stopped a young Black violinist, Elijah McClain, who was walking home from the store; that stop escalated into brutal physical restraint, involuntary drugging, and death. Protests have demanded an end to police violence.

The Aurora officers who used excessive and unnecessary use of force against McClain were not charged with wrongdoing for the actions that led to his death. But like Lolotai, those officer’s showed a disregard for excessive use of force, sharing pictures grinning and placing an officer in a mock-chokehold at a memorial for McClain. Like those officers, it is not Lolotai’s blatant and repeated violent use of force that put his job at risk, but his callous disregard shared publicly.

Perhaps the new Chief of Police, Maris Herold, will see Lolotai fired, rather than defended—as the BPD did under former Chief Testa.

An interesting end to this story comes by way of the U.S. mail. To my private residence, at my unlisted address, one day after learning of Lolotai’s paid administrative leave, I received a postcard: “Aloha From HawaiI.” On the back it read: 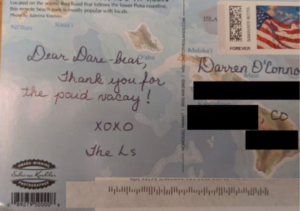 Dear Dare-bear, Thank you for the paid vacay! XOXO, The Ls.

I’ll leave it to our readers to decide how likely this is to be a gloating or threatening message. Luckily I have long taught my daughter to keep the door locked and don’t open it for strangers. It might be a cop.