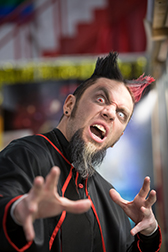 “I’m nothing like my character,” Rob Kimball begins. He’s making a joke about the Britney Spears shirt he’s wearing in advance of his wrestling match at Denver’s famous Mile High Comics. The joke is funny because of the juxtaposition of Britney Spears to his alter-ego, his wrestling identity, RYZIN.

Ryzin is a “devil character”. He’s a legally ordained minister of evil. He can legally preside over your marriage ceremony. He worked at Yellow Scene for four years, starting in 2014/15. Back then he had hair like mine (a bun). With a background that includes “doing any hard job I could find” after ending up on his own at 15 – “my dad had passed away from cancer. I was living on my own and wasn’t really qualified to do anything” – he walked into a YS sales interview in his 20s expecting another rejection.

He had got the interview after writing “a very passionate, long, cover letter” (which Shavonne still talks about), and he knew he was good at sales. He was already wrestling and had developed a knack for selling himself, selling tickets to shows, and he just needed a chance to be a real salesman. Living as a self-described “hobosexual” (someone who dates for places to live), his girlfriend’s mom at the time told him not to go after a sales career but to get a warehouse job; his girlfriend agreed.

It made sense. He was a roughneck. He wasn’t the guy in a suit with the degree. But he believed in himself, more than many of us do. The confidence of a white man is the same confidence we should all have. But he wasn’t just an overconfident bluster filled sack.

Shavonne asked him clearly: “why should I hire you?”

“I told her all about how passionate I was, how I needed a career. I had the eagerness,” Rob recalls telling her, selling himself again. “I think I would take a chance on you,” Shavonne replied. “Would you mind chopping your top knot off?” He said yes, “absolutely”, knowing he needed a path, a chance, a career…and that’s what he was given.

Early in his employ with YS, it was deadline, and he was sent off on his own while the pros worked finishing up sales. He went to Nederland and sold five ads, an unheard of feat and a statistical improbability. He was good, and bound to be better with Shavonne as his new mentor.

“Shavonne is a tough teacher,” Rob says, “She’s not everybody’s cup of tea. Her and I clicked on a different level. She can yell at me, she can give me a hard time, tell me I’m doing this or that wrong, or I need to do better, and I can take it and then I could apply what she was really saying. I was able to read between the lines, through her passion. She gets really strong when she’s passionate about something.”

Not everyone can do that. For many, Shavonne’s passion is too much, too strong, too loud, to indelicate. For Rob, it was learning moments. And learn he did, which continues to help. That career he wanted? He points out that he’s a sales manager for a firm in Florida (he moved there to advance his wrestling career because “you can do sales anywhere”).

He has a career today, because of Yellow Scene, he tells me. He wasn’t laid off during COVID, because he was the manager. Everything he knows is because of YS.

“The learning tree of Shavonne,” he says, unironically, “is never-ending. There are terms and things instilled in my brain that I use today… I’m a sales manager for a tech firm… and I got it all from learning under Shavonne”.

All seriousness aside, though, let’s talk Ryzin. “Do your coworkers,” I ask him, “your tech firm, do they know you’re affiliated with the Devil?”.

“They do, they do,” he laughs, “I was just plain Rob Ryzin in professional wrestling. In fact, Yellow Scene used to come to all my events. Like Shavonne, who she was dating at the time, and all the salespeople… they’d be all lined up and I’d be in my wrestling gear.” 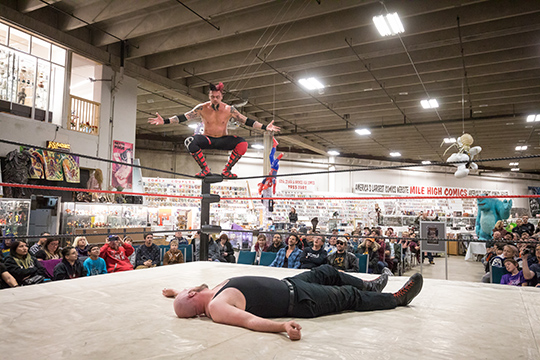 As a lifelong atheist, after moving to Orlando, he was told he needed a schtick, a gimmick, an identity to propel him; something people could idolize and follow. He laid in bed, tossed and turned, and the devil (character) came to him. He’d be a priest, but for the devil, and do things opposite. Not blessings, but curses.

Even as an atheist he took the time to familiarize himself with Satanic belief and the system of values they hold. The Satanic Church, the Satanic Temple, “as a matter of fact, it’s not what anybody thinks, at all,” he tells me. I’m not surprised; I’m an atheist who’s done the same research. “I familiarized myself with those beliefs a lot better, and easier, than with the normal Christian values. Cause it’s just about being your own god, being a good person.”

What matters, Rob reminds me, is not promoting Satanism or anything, but to be a good person, to stand up for the less fortunate, and to make the sale. He started here, and continues from here, as a branch off the Learning Tree of Shavonne, as a branch of YS. He rises, from Rob to Ryzin, to his full form, sanctified in the unholy… on the tech sales floor.