NOBO has New Magik: A Safe Art Space for Everyone

Editor’s Note: This article was written by an intern, with support and additional writing by our editor, De La Vaca, based on a recorded interview. 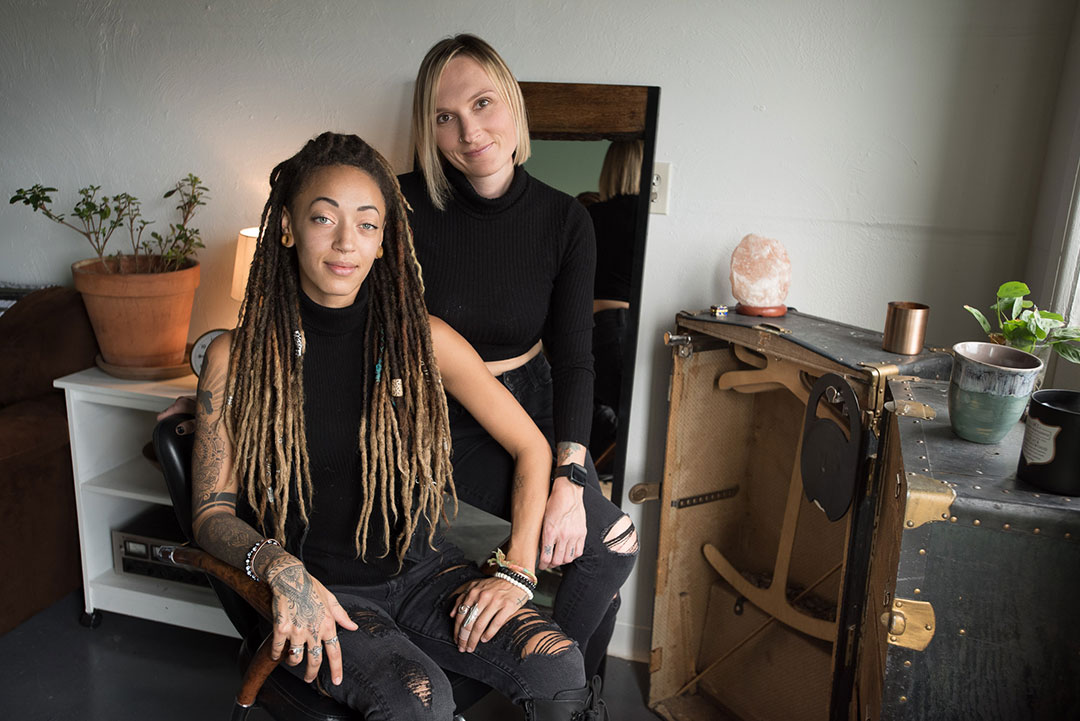 COVID may have hit everyone hard, but check out how these two Boulder born women flipped this tragic pandemic to a safe space for people to express themselves in their community. Two (kinda) former hairdressers, Jenny Wright and Jessie Matthews are co-founders and co-owners – as well as partners – of the hottest new art and production studio in the North Boulder Arts District, New Magik.

New Magik was created after Matthews and Wright’s jobs were impacted by COVID. They were brainstorming about what some of their passions were and what they could do to put these passions out and create a community. They wanted to create a space for people to come together to work on what they love and make new connections, to be a bridge and a conduit for creativity in their community. They wanted to provide something that is COVID safe and reliable to lean on while the world is forced to be online and distanced.

New Magik is a space that is working to bring the local BOCO art community together to share skill sets and create new connections amongst hopeful collaborators in a very special – and intentional – way. This business has as inspiration and motivation the incorporation of social justice, activism, and empowerment for women, people of color, aspiring artists, and entrepreneurs. By using these inspirations they are creating a space to not only bring people together but to have people learn new things from each other.

This is a place where you can go to either connect and do collaborations with other people in the community or have the opportunity and space to do your own thing. “The space itself isn’t bound by limitation,” they tell Yellow Scene in an interview, masks on, beers available, in their beautifully decorated space. It was a cool interview because the community was evident, as neighboring artists specializing in pottery stopped in to say hi and celebrate their opening and family popped in for the same reason.

The idea to create this space with a foundation of social justice, activism, and empowerment for women was something that was brought to them from their origins. Growing up in Colorado, for example, means there isn’t a large number of black people or people of color in general. Looking at Boulder county specifically, non-white people only account for 12.81 percent of the population. Of a population that continues to grow and is currently at nearly 108,000, it’s important to realize there aren’t many POC here to identify and build with; many that are in BOCO live in East County, as well, where properties are affordable and more rental units exist. 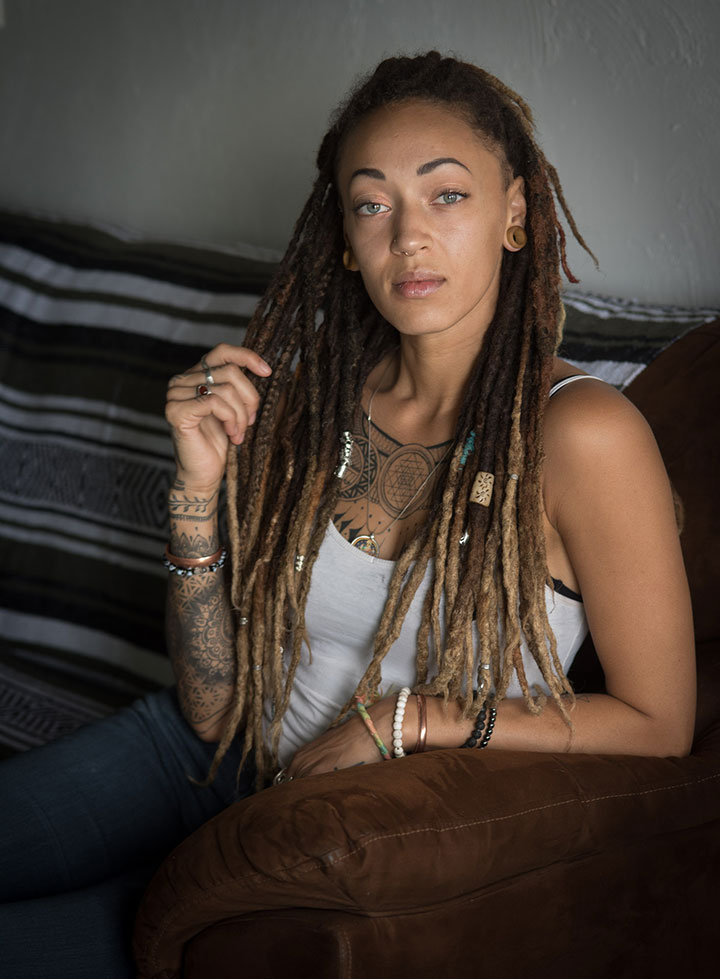 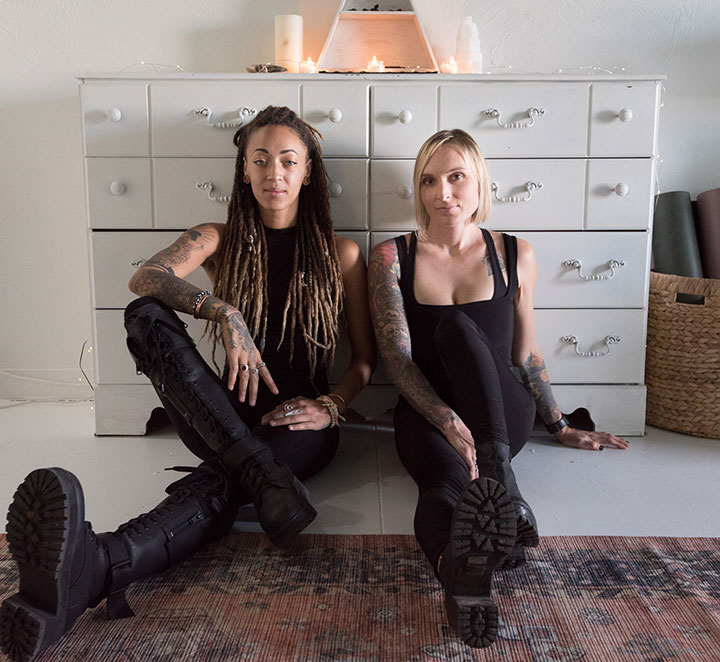 Matthews has used this space and this year to connect with her black roots and “the rising power of women,” telling us that, “We are surrounded by badass women who have their own sense of magik”. These are the type of people that she wants to work with and empower. She grew up in a divorced household with a black father and white mother. Her entire life, she points out candidly, she was surrounded by mostly white people, in a very white community, which led to identity issues. She found herself not wanting to identify as white or black and wasn’t feeling accepted by either community, a common experience of mixed race people. The rapper Logic, a black and white mixed rapper, said on the song Everybody:

But he was born with the white privilege!

Man, what the fu*k is that?

White people told me as a child, as a little boy, playin’ with his toys

I should be ashamed to be black

And some black people look ashamed when I rap

Not accepted by the black or the white

I don’t give a fu*k, praise God, I could see the light

Everybody talkin’ ’bout race this, race that

I wish I could erase that, face facts

I’m reminded of the song as she talks, telling me how she used this year to connect with her roots and start truly claiming herself as a Black woman, and now a Black business owner, and all the #BlackGirlMagik that goes with it. Her overall hope is to discover what “Black joy” is for herself and to embrace it.

As for Wright, she grew up in a white household wanting to be an alley in any way that she could, since she was born white; she wanted to use her privilege as a tool. Wright is clear that she “grew up with privilege” in the middle class, which used to be Boulder’s “norm”. This has changed over the years as Boulder becomes a much wealthier, exclusive, and higher class area. The only renters Boulder wants are students at CU on the Hill. 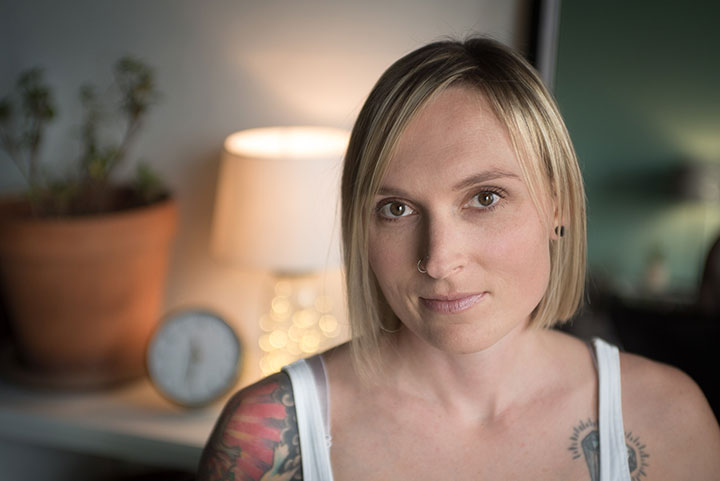 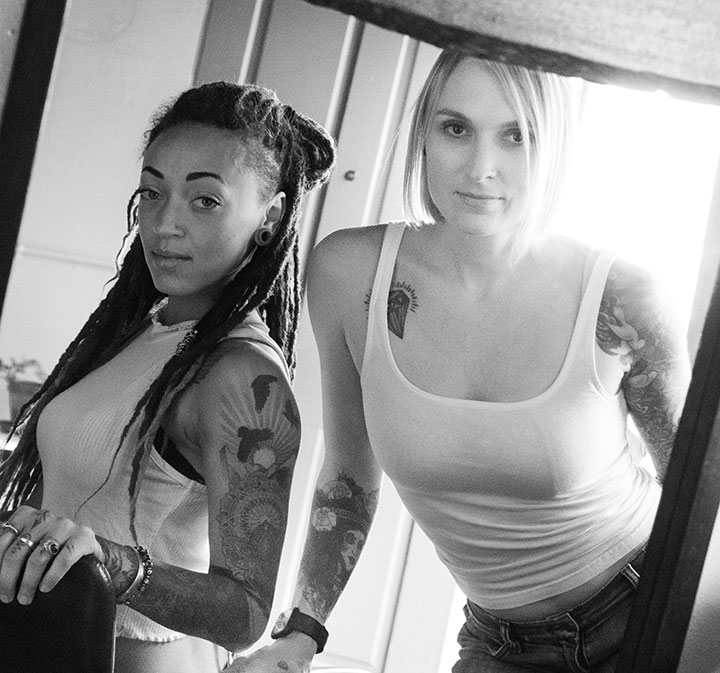 During her 20’s, Wright went through a bout with addiction and experienced discrimination based on that – ableism – with attendant  judgment and criticism. This was a transition period having to go from being a privileged person to being seen negatively by society. She learned to work through her own issues in a safe space, and wanted to create this same safe feeling for other people.

Overall the both of them come from humble roots. Even though they grew up with a comfortable lifestyle they both still had to work very hard to get where they are, no matter what the privilege was that they grew up with. “Using our privilege for the better” is how it was put to us.

They see themselves, rightly, as the “daughters of the old hippies” and they want to bring the soul back to people in the Boulder community… so they are bringing us New Magik.

So… what exactly is New Magik? 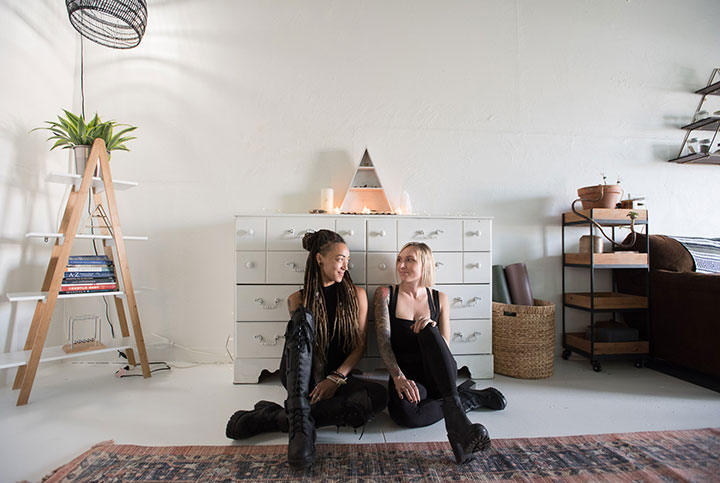 New Magik is a space that offers several tools, designed in a way so that they are easy to move around the space to be used in the way you want or need. Everything that is inside the New Magik studio is designed to be mobile so that many different platforms can be used for whatever people need to use them for. There is a greenscreen, a darkroom in the bathroom, and other amenities. This space is meant to be used and rearranged, and the unfinished floor leaves areas that can get messy; “all you have to do is roll back the rugs that cover the ground”.

The space is both comfy and industrial, pulling both of their styles together and referencing their hairdressing aesthetic. They have shelves built by local friends, chic adornments, and a banging sound system with a record player.

On top of the creative space, they also have acupuncture, meditation, reiki, massage, divination/tarot readings, counseling/therapy sessions, sound healings, yoga, and many more options. The opportunities at New Magik are endless and open to whatever your mind can think of. Mediums go from drawing and painting to photography and videography. The New Magik space is an intersection and fusion of all things that they both love. They are looking to explore both old and new mediums and everything in between. 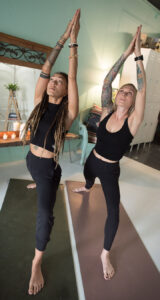 Another option that New Magik offers is for the space to be rented out, either for your solo purposes or to be safe and COVID friendly, with a limit of two socially-distanced people who are wearing masks, with another person to share studio time with.

Mathews and Wright like to call the New Magik space a ‘creative incubator’ for people to become inspired and explore opportunities, and they are currently accepting new members who want to join in this special little creative endeavor. They are also accepting donations from anyone interested in being a part of building up New Magik and helping financially with expansions.

Due to the way COVID is hitting everyone and changing the way people interact with each other, the main goal of New Magik is to have an online creativity-sharing platform. They want to give people the opportunity and safe feeling of having this platform available virtually on an ongoing basis. Through this online platform, you will be able to take classes that will be offered, or participate in the limited in person capacity.

New Magik wants to bring back and indulge in the old Boulder, a scarce recalled world of hippie magic and solidarity, creativity, and community. They say that it’s hard to exist in the Boulder of today if you’re not wealthy, which is something that has developed over the years as developers and politicians have worked to insulate Boulder from expansion, driving up housing prices even as Colorado has seen a surge of in-migration. At New Magik, they worked very hard to build everything themselves without any help, a reflection of their roots, the values they were raised with, and the goal to honor the past while creating today.

We expect that New Magik will be something that no one forgets. These two women bring their personalities, passions, and profundities right into the business. Stop in, where you will be greeted by the good vibes emanating from this new space, a space that could be your workspace, and be greeted by women that fill this area with love and hope. Come see what you can get involved in and meet the people of this new community. This could be just the place for you. This could be just what you need to get rid of those pandemic scary’s, the doldrums, and bring the new you out for the world to see.

View all posts by Kate Lieberman →