In 2020, the country experienced a reckoning with policing and criminal justice reform following the murders of George Floyd and Breonna Taylor. I started organizing for criminal justice reforms in 2014, first with a national organization and later with a local group in Denver. Efforts mostly focused on three main areas: independent oversight, the discipline matrix, and District Attorney accountability. These are all worthy areas of change and organizing. For me, though, I’m no longer interested in dedicating labor to reform, but to transformation, which is why I helped found in 2018 and currently run DASHR: Denver Alliance for Street Health Response.

DASHR works to create and support community-based responses to conflict and crisis as alternatives to policing and jail. We use a spectrum of transforming safety called our Safety Wheel, which houses our efforts in four main areas: Community Empowerment, Basic Human Needs, Crisis Response, and Healing. DASHR’s creation was inspired by the CAHOOTS program in Eugene, Oregon which replaces police with community responders. 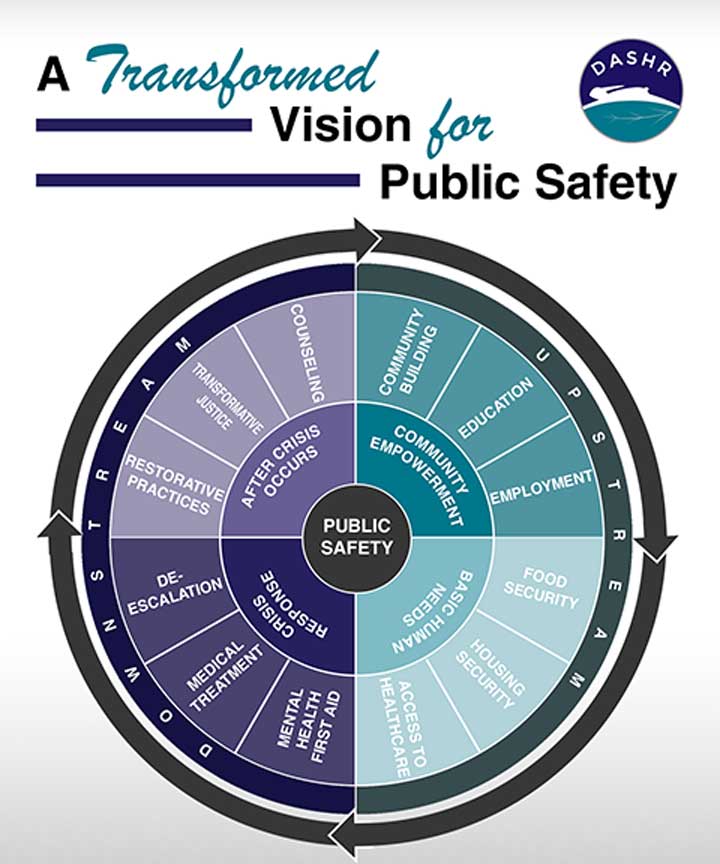 DASHR helped to launch Restorative Denver in 2019, which sends cases through a restorative instead of a punitive process. In 2020, our organization helped to launch STAR: Support Team Assisted Response, which sends a paramedic and mental health clinician to 911 calls instead of law enforcement. In the first six months, STAR responded to 700+ calls and had no arrests or need for law enforcement. DASHR, in addition to being one of the main drivers of STAR, became the community facilitator last summer.

Other work we’ve done includes helping to successfully pass a proposal in Aurora to create and fund a non-police alternative, which should launch soon. We are currently working with about a dozen communities in Colorado on implementing non-police models and have advised dozens more across the country. We also have our own rapid response efforts that include distributions to unhoused folks, using street medics in the community, and helping to foster a medic network in Denver that supported last year’s protests.

Our work was confirmed as especially important given recent protests and demands to re-imagine public safety. Additionally, the pandemic has amplified existing systemic violence and increased experiences of homelessness, substance use, and mental health crises; all issues that are navigated primarily through the criminal justice system. Our community is suffering and dying and this work is more urgent than ever. More importantly, the systems we’ve tried to work with for decades simply aren’t listening.

We were made aware that Boulder has issued a request for proposals to fund a non-police alternative. To that end, given our experience, we would insist on community leadership of such efforts. Although we have had conversations with community members and Council members in Boulder about implementing a non-police model, we did not know about this development. Our role has been as a vehicle for community voice and ownership of these programs, a vehicle that we offer to any who’ve reached out to use so far in Boulder as well as those who haven’t.