Who are the Board of Directors of the Aurora Police Association?

Update 9/9/2021: Revised to reflect Virgil Majors reached out to YS to inform us he is no longer on the Board for the APA.

Additionally, since publishing this article social media posts were removed. They will remain in the article to demonstrate this.

Aurora Police Association (APA) released a statement today, Sept. 1, 2021, on the 32 indictments by the Colorado grand jury, against three Aurora Police Officers and two paramedics involved in the death of Elijah McClain. 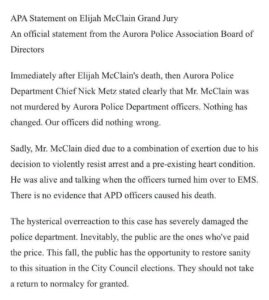 Statement released by Aurora Police Association Board of Directors, Sept. 1, 2021, regarding the 32 indictments against 3 Aurora Police Officers and 2 Paramedics

The statement by the APA invoked shock and horror for many in the community. This organization is not affiliated with the City of Aurora or Aurora Police Department per the statement released in response to the APA’s. 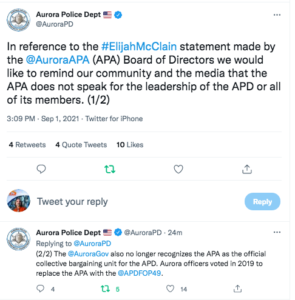 In reference to the #ElijahMcClain statement made by the @AuroraAPA (APA) Board of Directors we would like to remind our community and the media that the APA does not speak for the leadership of the APD or all of its members. (1/2)

The APA appears to provide significant funding for police officers who face legal challenges, which many on the APA Board have been involved in.

From the Aurora Police Association website under Board and Staff:

The Aurora Police Association was founded as a social club in 1942 for police officers serving the Aurora, Colorado Police Department. As law enforcement changed over time, the APA expanded their services to protect officers and their families in contract negotiations with the City of Aurora, offering legal services, insurance benefits and a host of other programs for their members and the Aurora community.
The Aurora Police Association Charitable Foundation was founded to help Aurora police officers and their families during times of hardship. The foundation has grown to support scholarships for high school students entering law enforcement careers and the twice-annual Shop with a Cop program to provide back to school supplies and holiday gifts for Aurora children and their families. The Charitable Foundation fundraisers have supported scholarships for the children of Aurora Police Officers, aided the Aurora Police Explorers program and provided donations to Children’s Hospital of Colorado.
The Charitable Foundation provides financial assistance to our APA members, their families and other organizations throughout Aurora and our law enforcement community.

Considering there are no Board of Directors listed on the website — and we had to dig up their tax filing to get that information on this non-profit — who wrote this statement and released it?

Most APA Board members are currently employed by the Aurora Police Department or were previously employed by APD. Based on this statement by the APA which denounced any wrongdoing by officers in the death of Elijah McClain, how much has the ongoing violent culture within the APD really changed? Will the APD further distance themselves from this organization by terminating employment for these officers?

The Community asked some good questions around this as well.

You should probably have them cease & desist or clarify. They claim to represent ALL of the APD with statements like "OUR officers did nothing wrong". How is the public supposed to trust you when your officers are sending mixed signals? Get your shit together @APDChiefWilson pic.twitter.com/le58C5CHx4

Aurora Police Association Board of Directors

The majority are currently employed at Aurora Police Department.

Virgil Majors APA Asst Treasurer / Community Relations Officer Aurora Police Department UPDATE: Mr Majors notified YS that he is no longer on the Board for APA.