Libations that make our lives worthwhile

We raise our collective glasses to toast the vintners, the distillers, the brewers, and the baristas who spend their lives, their love, their money, and their energy on keeping us libated, liquored up, awake, and loose. We love a summer sip, to dance under stars when the wine hits, to shoot vodkas with strangers in random bars, and to recall it all over a cup of coffee.

As F. Scott Fitzgerald said, “Here’s to alcohol, the rose-colored glasses of life.”

(All photography by De La Vaca unless otherwise stated.) 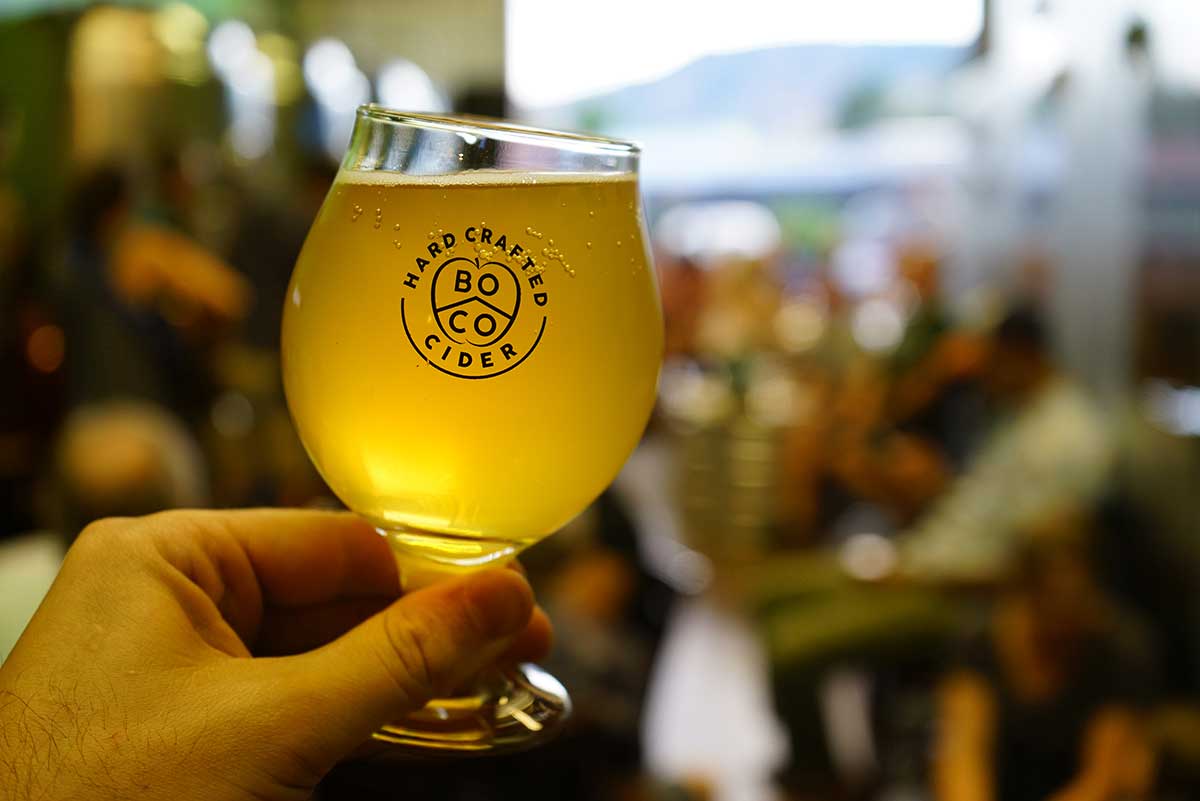 I’m told this is their flagship cider. It’s Washington Apple Juice pitched with English yeast. Their official drinking notes say that it’s “delicious apple with hints of pear and notes of caramel.” We agree that it’s delicious. Because it’s so good, it’s foundational to many of the other ciders they make. They use it as a base cider. For example, the Mango Tango, which has “a peck of peppers including Poblano, Anaheim, Habanero, and Jalapeño to create a hot dance between sweet and spicy.” Surprisingly, given I tend to dislike pepper drinks, the blending here is nuanced and definitely delicious. 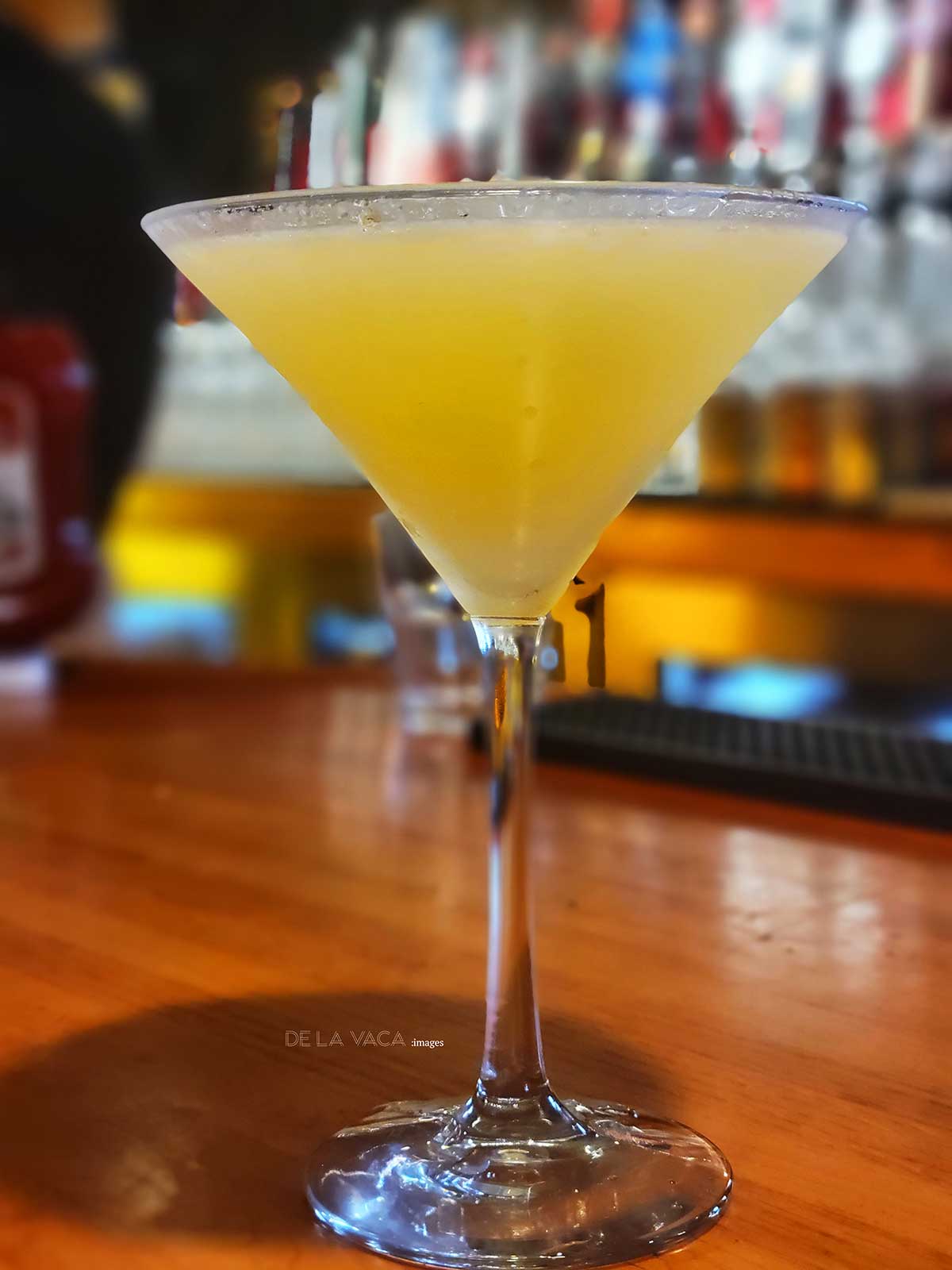 “It’s a little sophisticated, sweet-savory drink,” my favorite bartender tells me. “It’s got passion fruit, lime, citrus vodka, a splash of simple syrup, and topped with a champagne floater.” Our bartender has created this cocktail himself, so you can’t find it anywhere else; he’s only been bartending for three months and already a mixologist. Some people are born for the bar life. It’s a large drink, at 10oz, and gorgeously presented. Take a date for the casual bar fare – or a fancy burger – then spice it up with this high-level libation. Everything about this drinks screams “yessss, please enjoy me and then order another.” 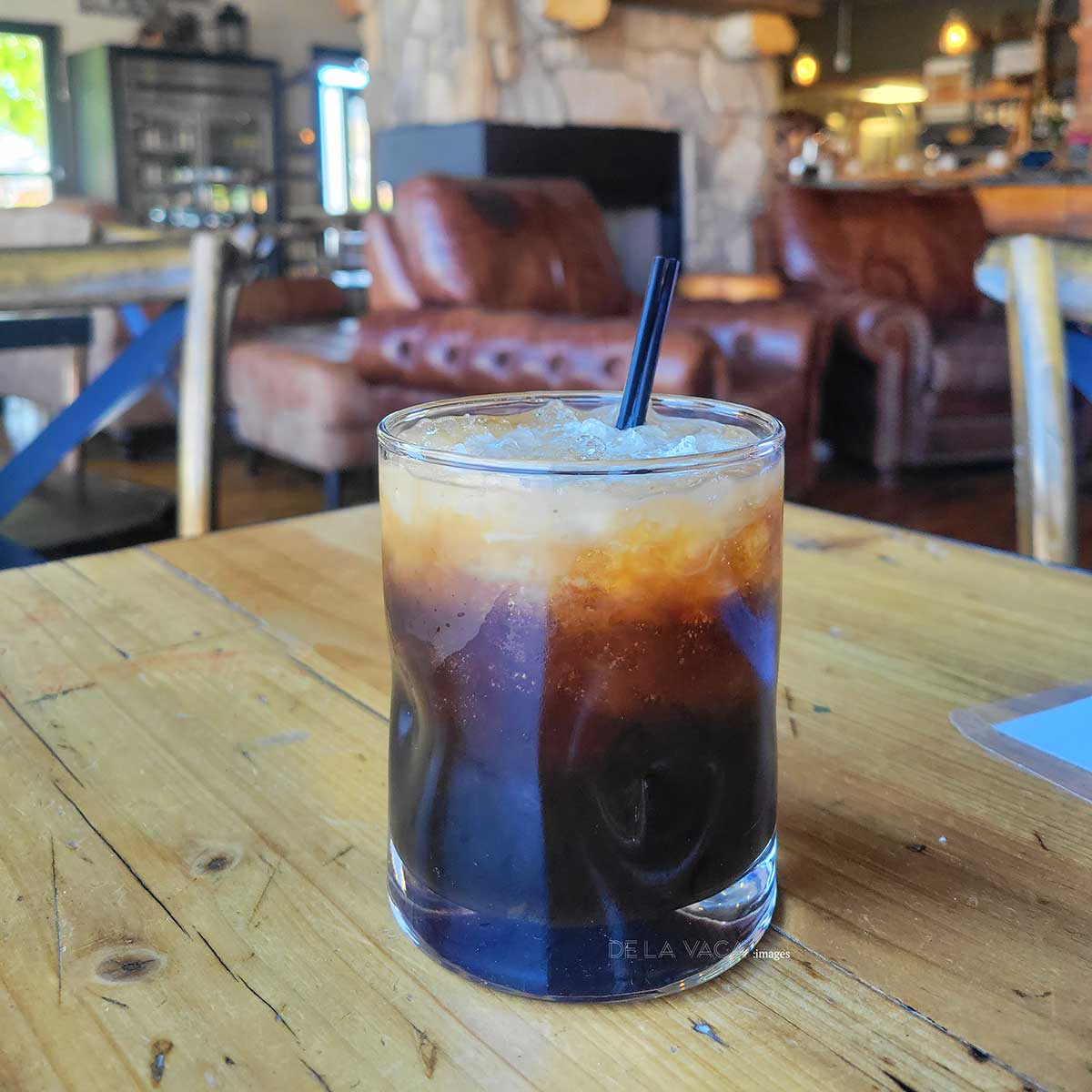 “This take on a White Russian is a hand-crafted cocktail made with our house root beer” – yes, they make their own in house – vodka, coffee liqueur, and a splash of cream. It looks like a root beer float with the heavy cream floating on top, and it tastes like you’re getting a buzz at a 1950s soda fountain. Ron (the co-owner with his wife) tells me they may get to canning it one day after I joke that I want it at home on a warm movie night. All the concoctions are made in house. They’re definitely killing it in Frederick, CO. 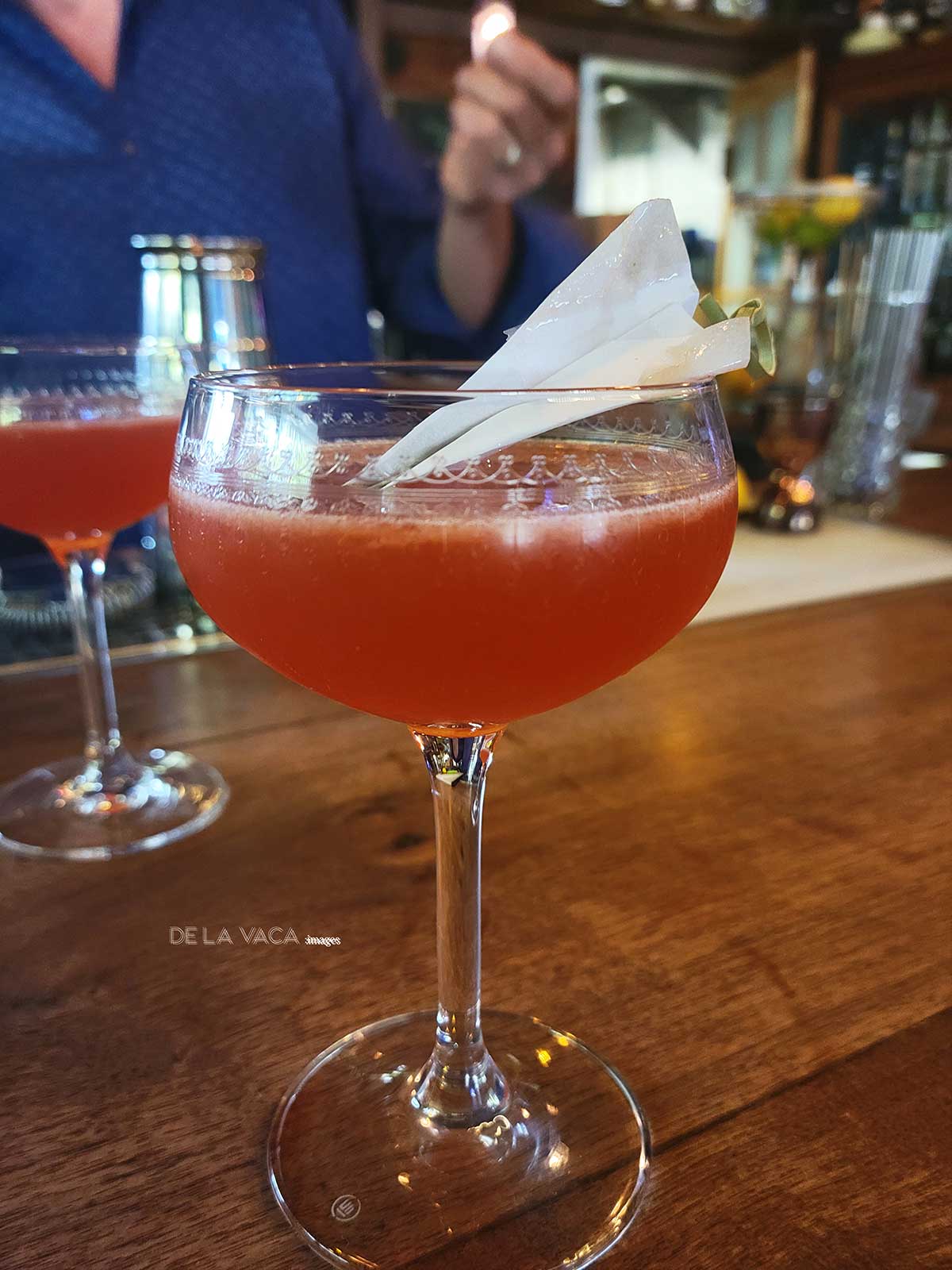 Some people are born to entertain. Wes is an old school cocktail guy, having won awards in Vegas for his creations. He guarantees his Old Fashioned is the best you’ve ever had, but starts with a Paper Plane. It’s a classic 1940s libation, equal parts rye, Aperol, lemon, and amaro. Shake it, serve it up, lick your lips, and wonder why you’ve been missing out. Wes also folded a paper plane, put it on a skewer, and laid it on top. I could tell you about the Bada Bing, but I’m not going to. This place is delectable and your visit is required. 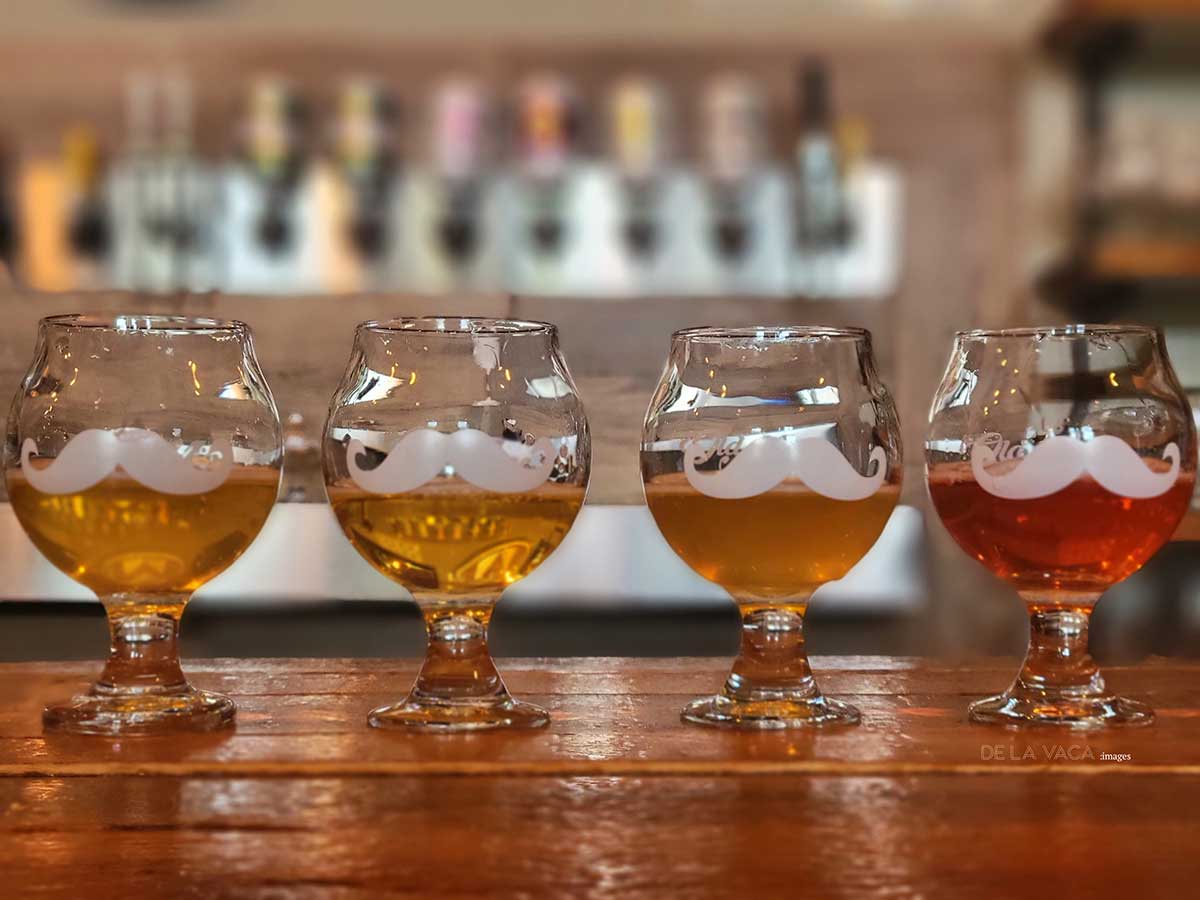 The Old Mine – Cider Flight

These, I’m told, are the core ciders that are always going to be around. The Handlebar started it all and is enough to hold down the entire shop. It’s “a burst of refreshing apple fruitiness and a hint of tartness… liquid gold.” My flight is rounded off with Crisp Pear (same process as Handlebar, different fruit). And lastly we have Colorado Sunshine. Citra hopped, like a smooth, apple-infused IPA, it’s the cider of choice for discerning craft beverage drinkers. It’s my favorite. Lastly we had a hibiscus citrus pear. They’re all fantastic. 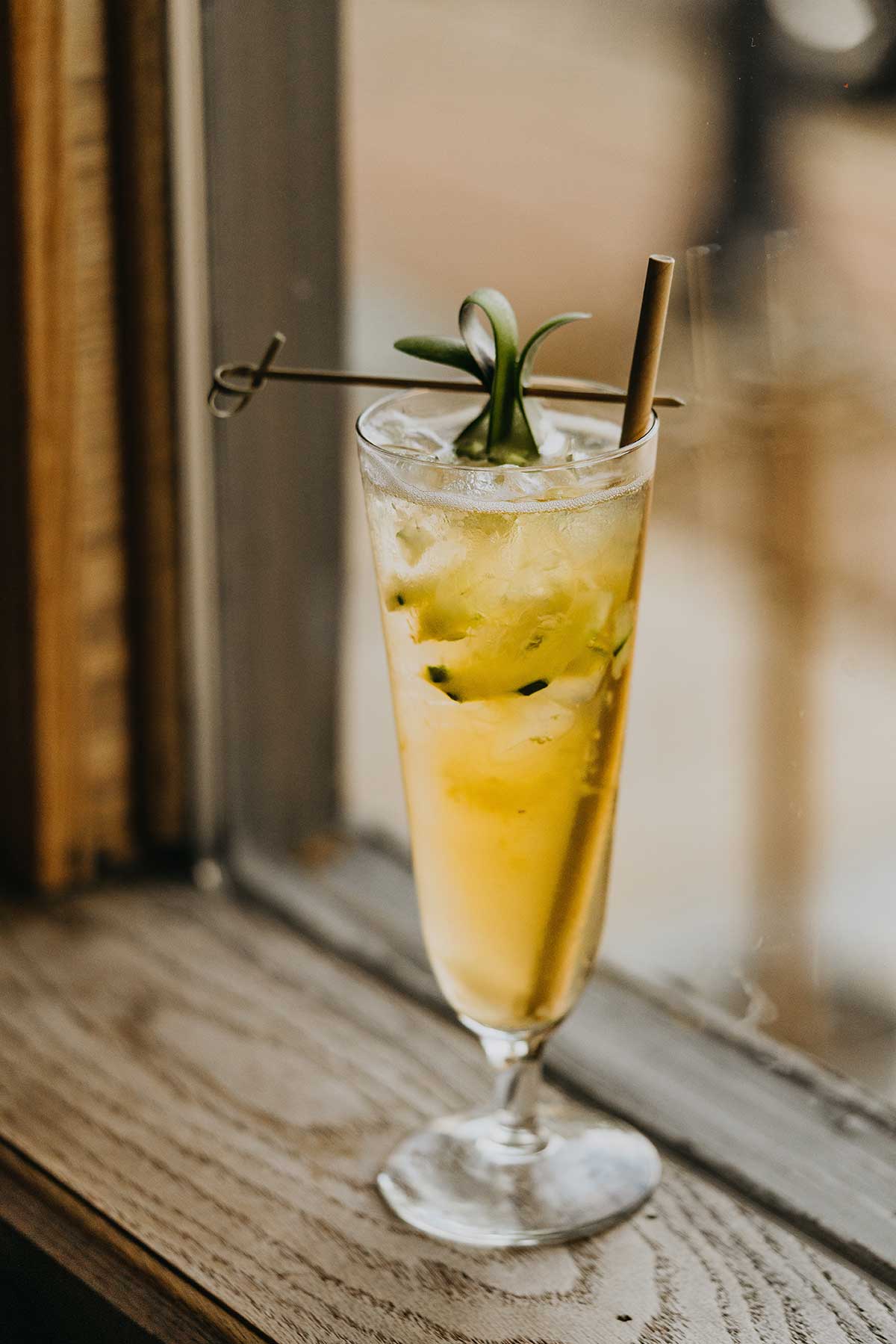 I know – living in the country – a few farmer’s daughters. Few I like as much as this drink. This huckleberry-infused vodka, cucumber, lemon, balsamic, and agave godsend is the cocktail that started it all when they opened six years ago. The manager told me, “It’s a little sour, a little sweet, and really balanced, really refreshing with the cucumber. A great patio drink.” I concur, sir. I was loving the muddled cucumber and I have to say it’s one of the few drinks I finished in this round of reviews. 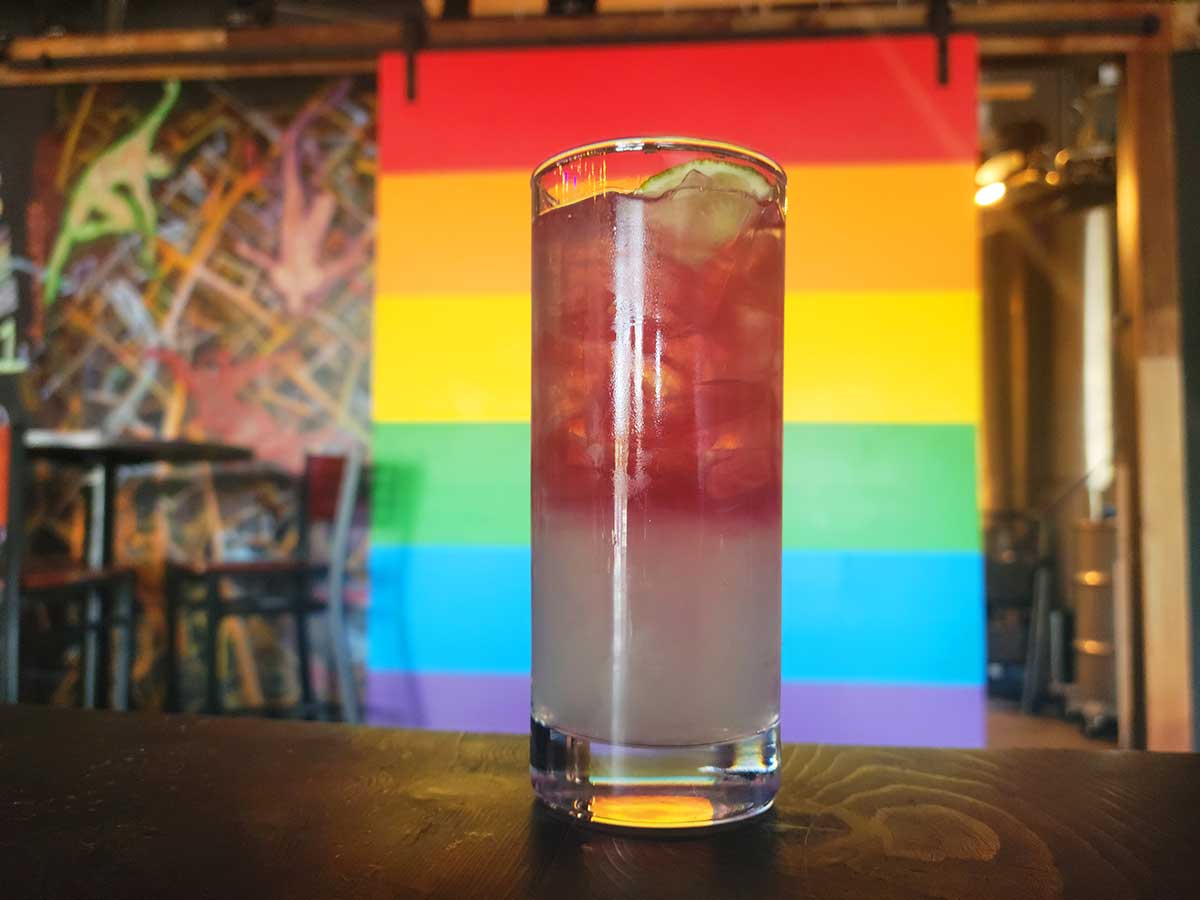 DV8 Distillery – The Pride (and an Espresso Vodka)

I first had a Pride during one of their massive parties. Maybe the bartender was tired? This one was fantastic and changed my mind. It’s a party drink but it also speaks to the identity of DV8, which is openly queer-friendly, a safe space. Pineapple vodka, lemonade, and a splash of a few other things and voilà… delicious. The Espresso Vodka is a perfect sipper. I want to put it in a mug (with a single large cube) and watch a movie with the fire crackling and now that we’re in fall I can. Note that this is an authentic, natural infusion. This is real. 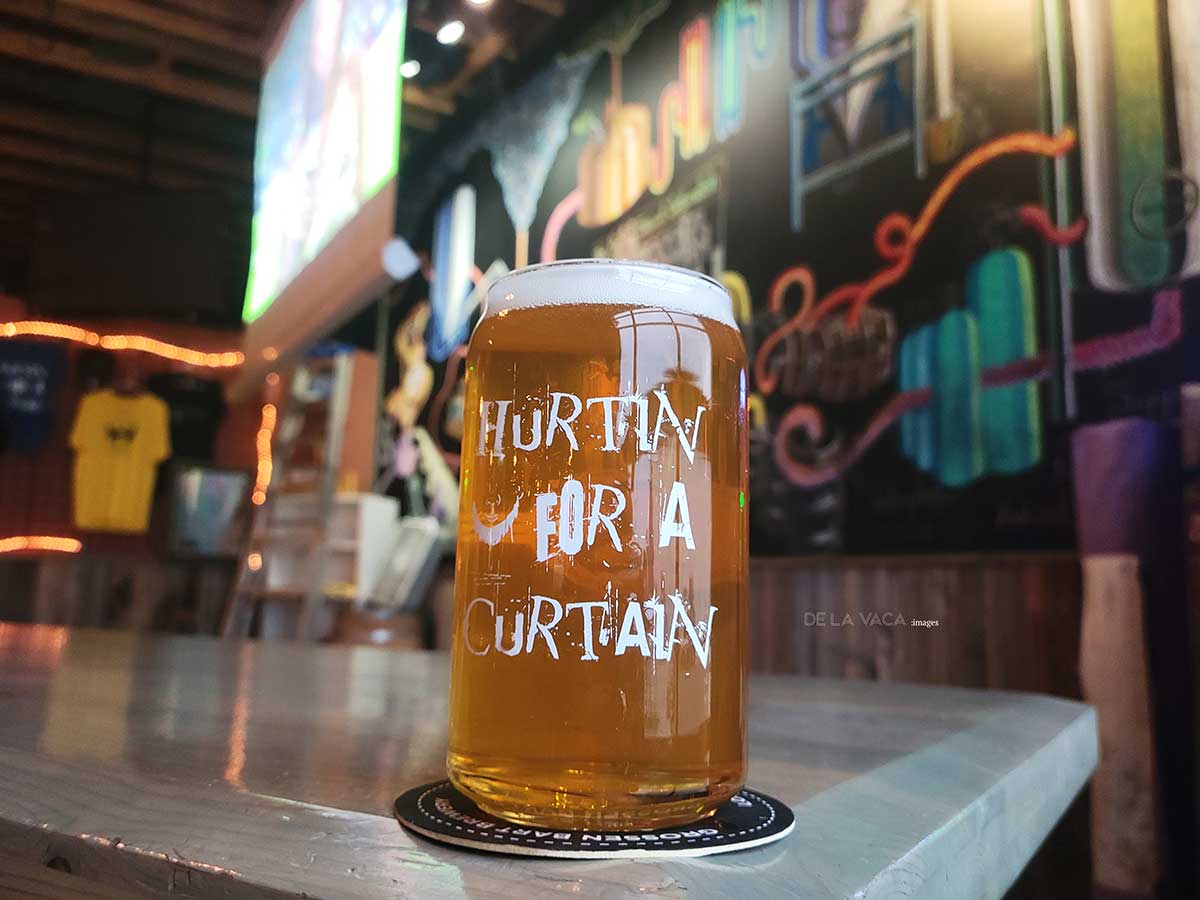 I surprised GBB with my drop-in. They weren’t ready with a favorite drink. The bartender spotted a regular and yelled, “Tyler! He’s a regular. Tyler, what’s your favorite beer?” And Tyler knew, deep in his soul. Not a moment of hesitation and he says: The Chin Curtain. I must’ve looked bewildered. The name is funny and I didn’t expect it. It’s an IPA named after a beard, with an UnTapped rating of 3.8 out of 5. It’s not overly hopped, which I liked. It’s not overwhelming. It’s smooth AF. Plus, I just love the vibe of this place. 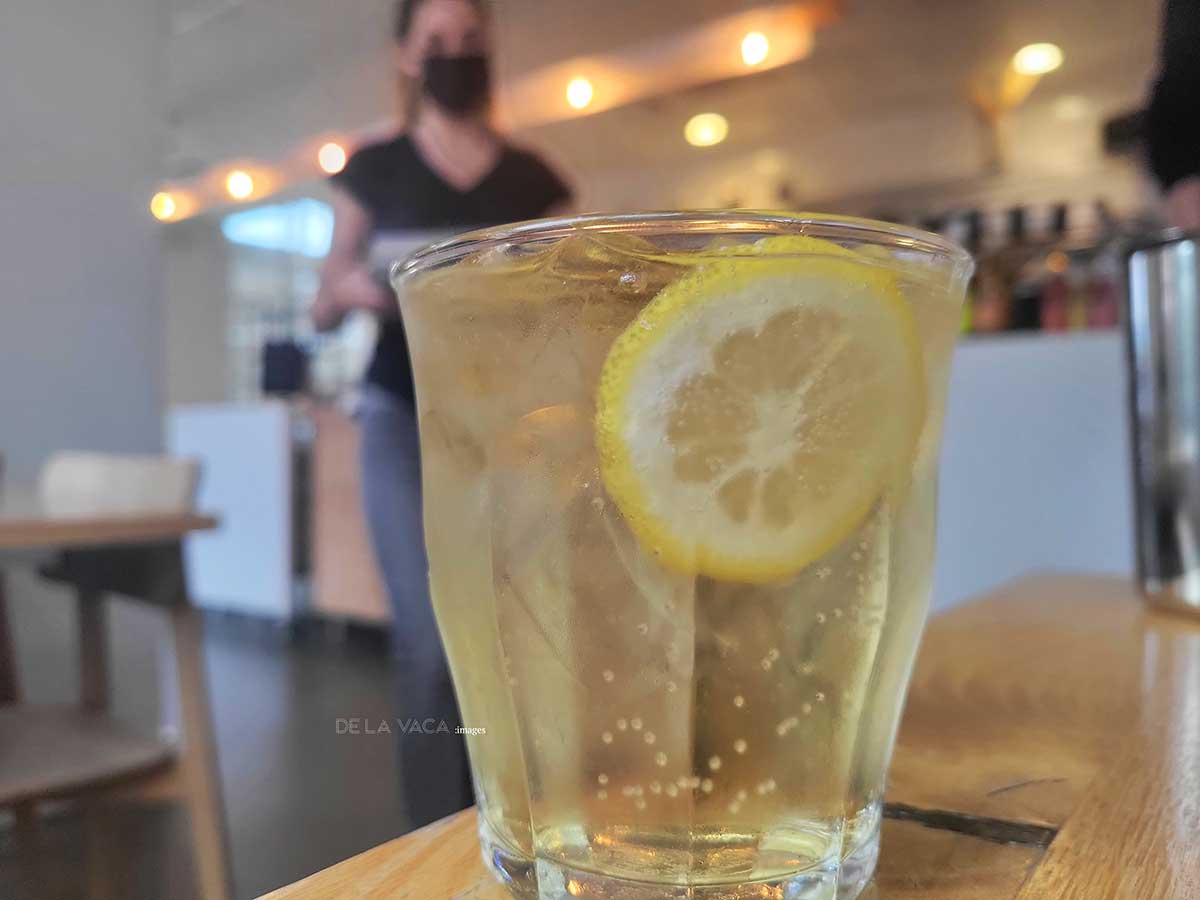 Using Dryland Distillers’ Light Wheat Whiskey (same Sonoran grain as their bread baked), this cocktail is completed with sparkling water. Simple, elegant, hydrating. The simplicity (and whiskey style) recalls Japanese whiskeys and the grain harkens back to the bakery, making the use of Dryland for these cocktails a perfect choice. This is light, there’s water – good drinks and good nutrition matter, keeping you hydrated matters – so you can session these and drink with friends all day. We suggest the patio. It’s wonderful. 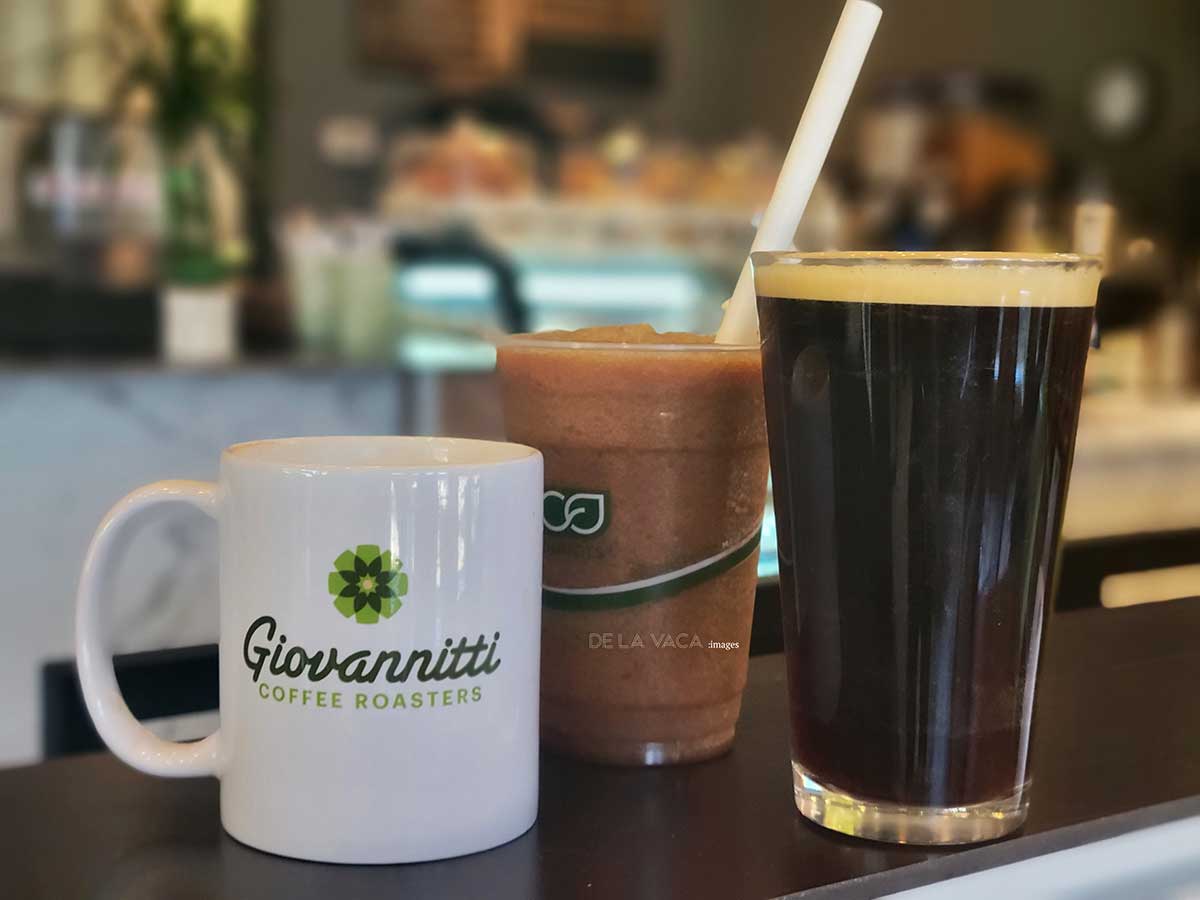 It’s a fantastic espresso, I’m told. Having lived in Europe I expect my espresso served as a shot. I do love a latte though, and this double shot had me living my best life in a matter of minutes. I followed with a Nitro Cold Brew tasting. These have never been great to me but this one is done right. Lastly, and most fun, is the Coffee Slushie. Cold brewed coffee, organic oat milk, topped with hazelnut flavoring. I took this one to go. 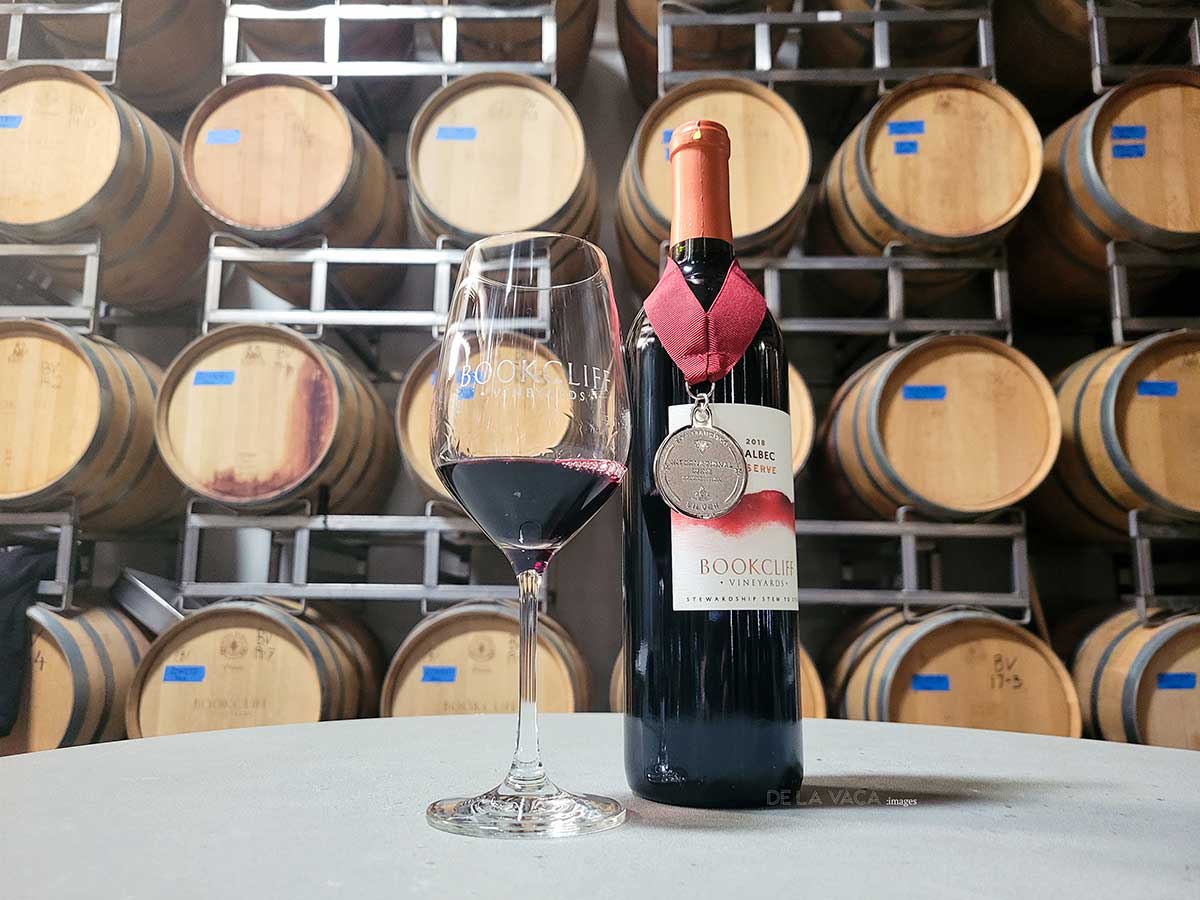 “Our Malbec Reserve is different from our regular in that it is aged longer in Oak (18 months), comes from our most prized vineyards – that is the Hawk Ridge region of the valley – and is one of our most popular wines.” Malbec grows well in CO and Bookcliff is doing a fantastic job cultivating it. It’s to the drier side, full-mouthed with a softer nose than I expected. Excellent tannins and legs for days. It’ll cellar well so you can grab a few bottles to spice up a meal. It took silver in San Francisco at the International Wine Competition 2020. 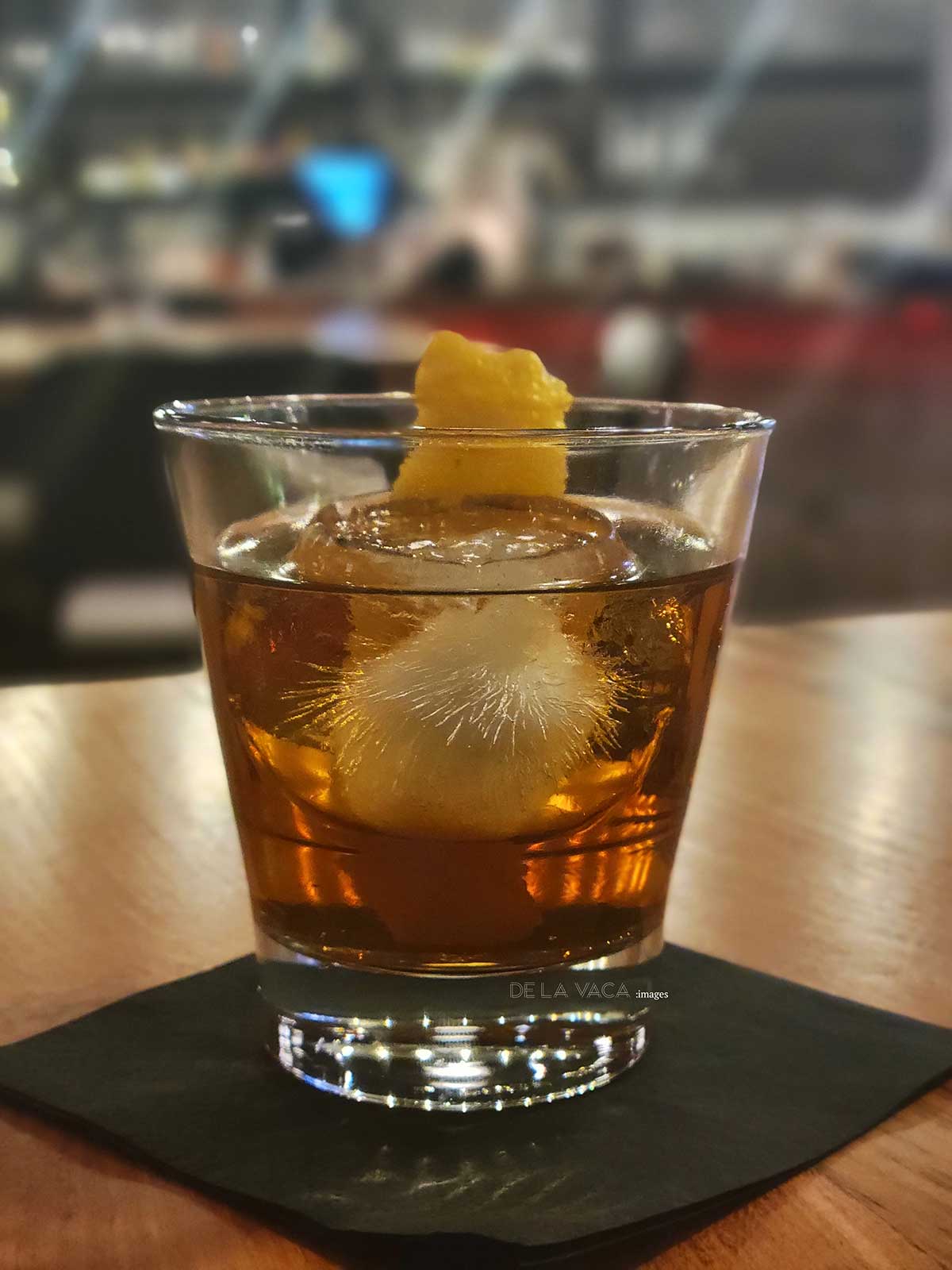 INJOY Tavern* – Till the money runs out

The bar manager/mixologist/genius at INJOY told me it’s a “nod to some musicians that reference green chartreuse.” It’s a smoked glass, rye whiskey (they use Woodford Reserve Rye), green chartreuse, and sweet vermouth. The floral herbaceousness of the chartreuse stands out, as does the smoke that magically lingers. I wasn’t even at INJOY for a cocktail review but had to include this. It’s a perfect drink and officially my new favorite whiskey cocktail. *INJOY was not on my review list but it was so good I bumped one to include it.