A legacy space continues to make strides in cannabis culture for Colorado. 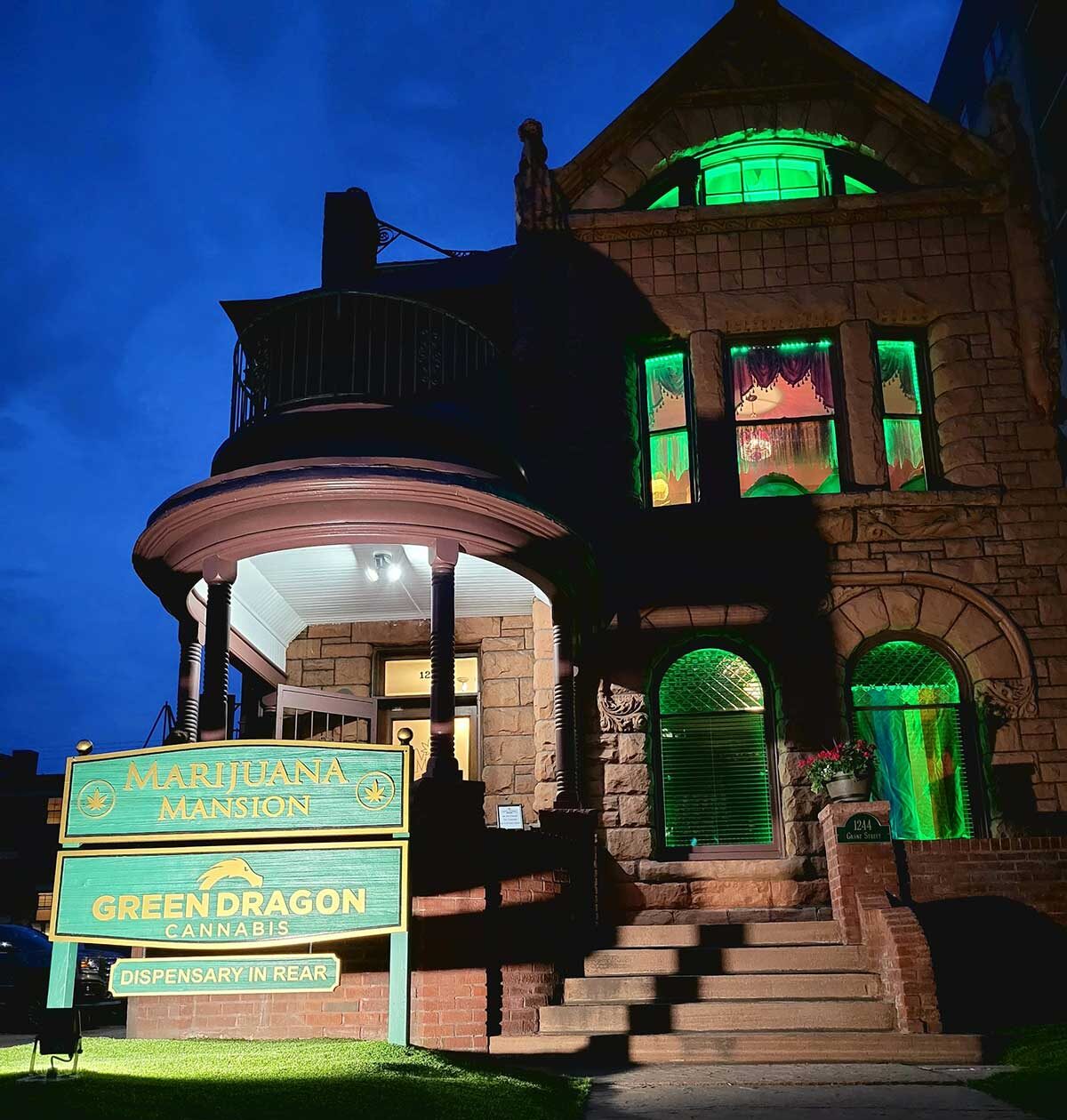 Nestled quite anachronistically among condominiums, a Domino’s Pizza, and several nightclubs, just a block from homeless sweeps a few days prior, sits a lovely sandstone mansion. The building, which is in the national registry of historic sites, has largely not been able to monetize its opulence until recently. The Cresswell Mansion’s history in Colorado cannabis culture however was already established years before.

Named the Cresswell Mansion for the family to whom it was originally built, it stands as a living monolith to the past. In our more recent history in 2011 the Marijuana Mansion became home to the Marijuana Policy Project in Colorado. You know, those nice people that helped Colorado reach sensible cannabis laws? The bulk of the work on 2012’s Amendment 64 was done here within the mansion.

After having been the incubator of cannabis legalization and regulation in Colorado starting in 2019, she would begin her glow up granted it required more black lights than a head shop sells in a year.

A slew of designers and artists worked over the course of a few years and a pandemic. With hard work they have created a space that doesn’t just demand attention, but grabs it, and sits it in a comfy chair that’s hard to get out of. Through the shutdown the mansion lay disused, stuck on the precipice of operation, held back by the needs of the people to stay healthy and safe. The grand opening comes almost a year late and after the shutdown, a time when many people were exhausted from isolation. 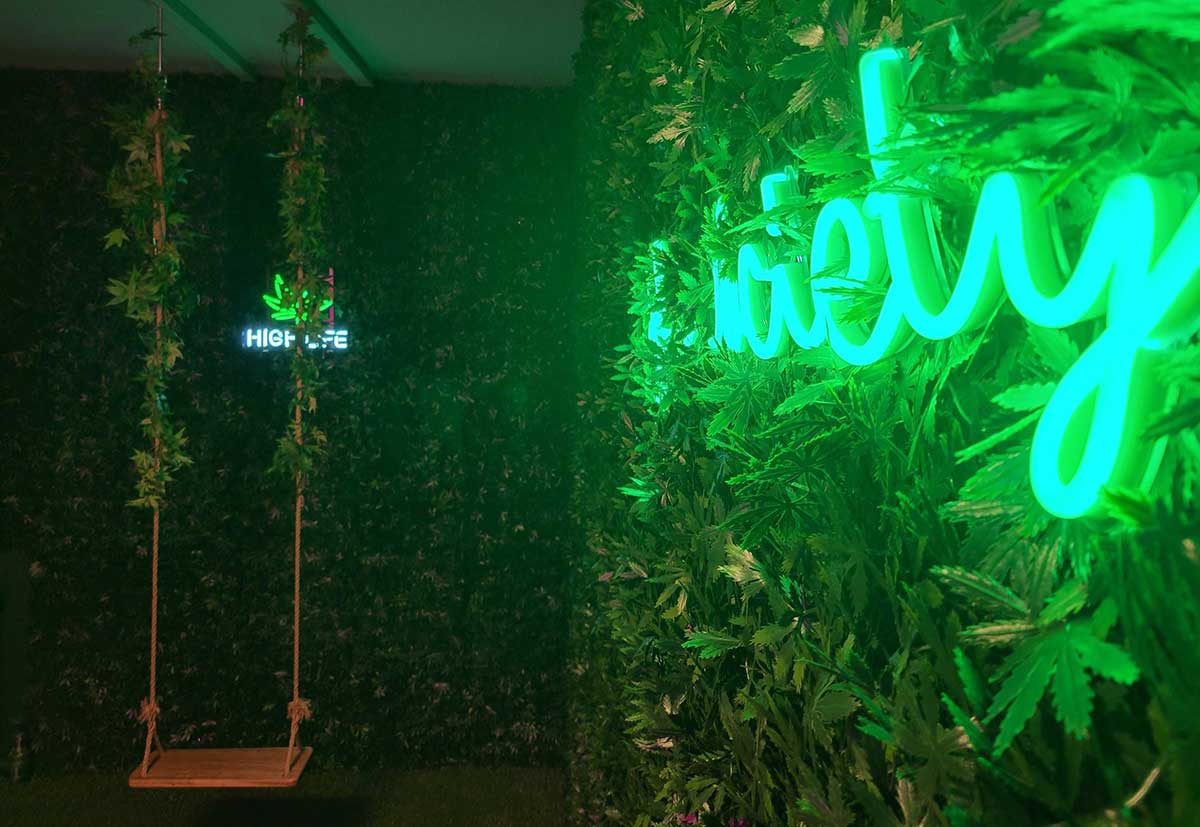 While not a conference center or auditorium, the Mansion operates as a cannabis-friendly event space and can easily hold space for small businesses and local organizations. Local businesses can provide their employees a uniquely combined-use event space, meaning both a bar serving alcohol downstairs and a safe space everywhere for non-drinkers to toke up.

Owners are keen to indicate that the purpose of the space is not just to give your get-together some elevation, but also to destigmatize and normalize the use of cannabis.

If all that weren’t enough, the 4200 sq. ft. mansion has its own green dragon dispensary on premises. To make sure that you have incredibly close access to whatever you might need, for a great night, or even a walkthrough.

The music from the DJ was well-contained within the 4-story home that looked like it was from a Scooby Doo episode. As soon as the doors opened it was hard to mistake it for anything but a party. Name given, tag received and I was set loose in what can best be described as a museum dedicated to getting stoned. I say set loose quite loosely because quickly I was caught up to and provided a much needed escort through what was such a wonderfully curated experience.

The bar was hopping and was made to have a speakeasy feel and was a historically well preserved space.

Upstairs the rooms become increasingly more like cutouts from a Lewis Carol piece.  Highly stylized spaces, some covered in cannabis leaves, some with ball pit bathtubs, all with a deep theme of weed. 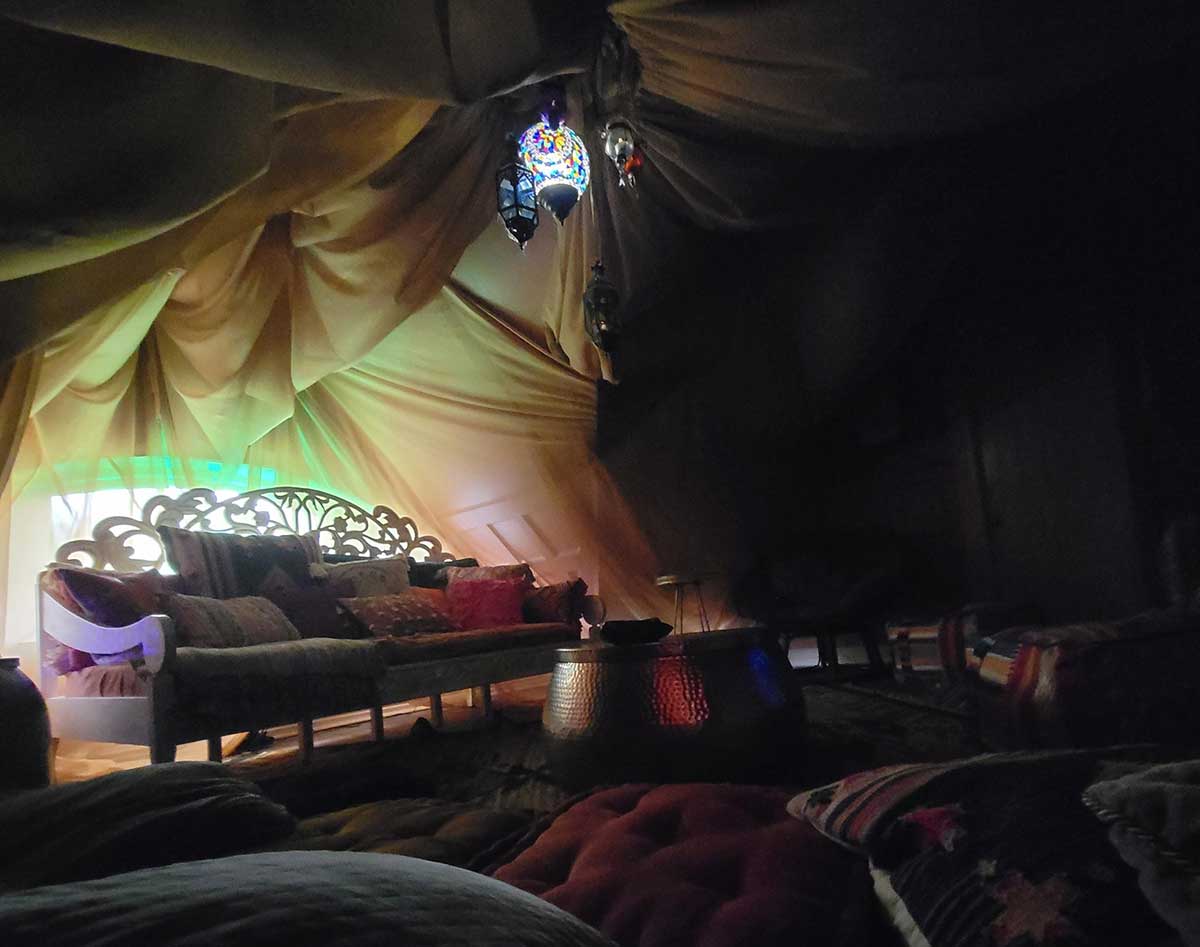 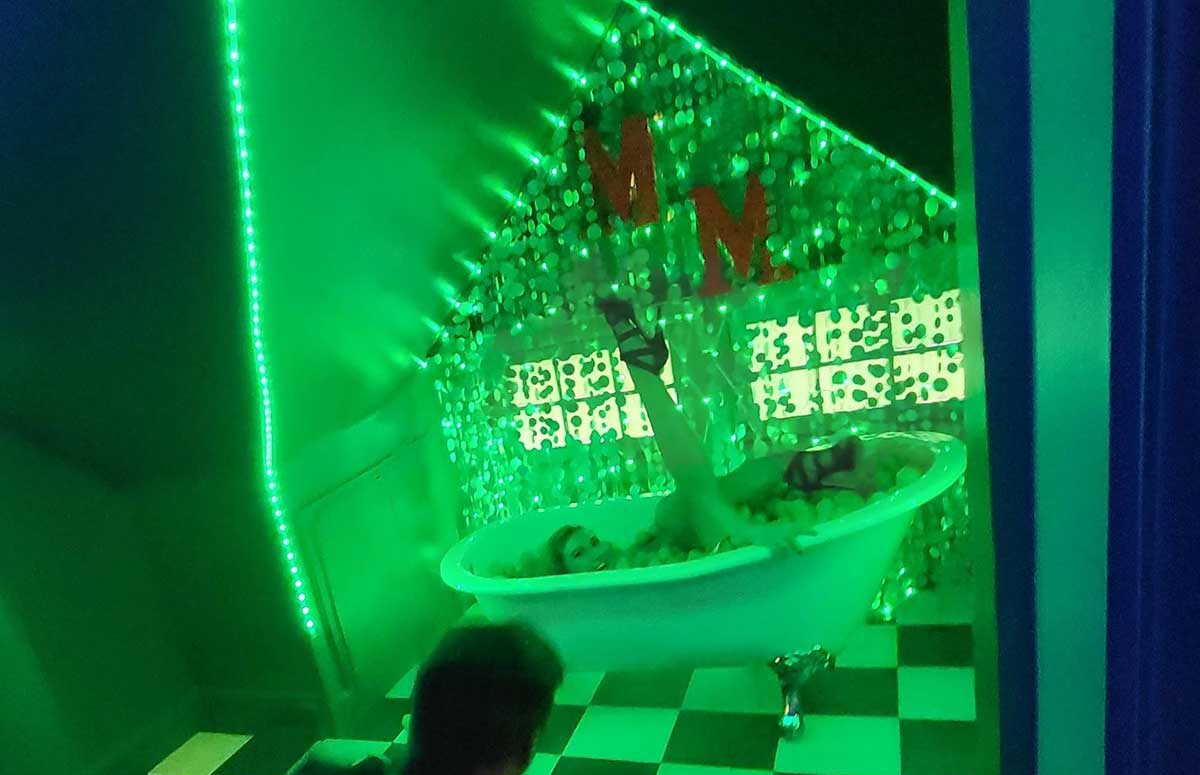 I had brought my own, not knowing the scene would be complete with large bowls of pre-rolls, edibles, and other offerings all on the altar of making the night that special, which it did.

I got stuck in what I called the Cheshire Cat room, dizzying black and white spirals speckled with cannabis strains made me plop right on the floor and just sat in the moment, I spent some time and smoked a few joints with some cool folks.  We talked about the old days. Mostly, waxing nostalgic about arrests, paranoia and trauma, all caused by the drug war. We talked about Colorado’s social equity programs, and how they don’t go far enough. 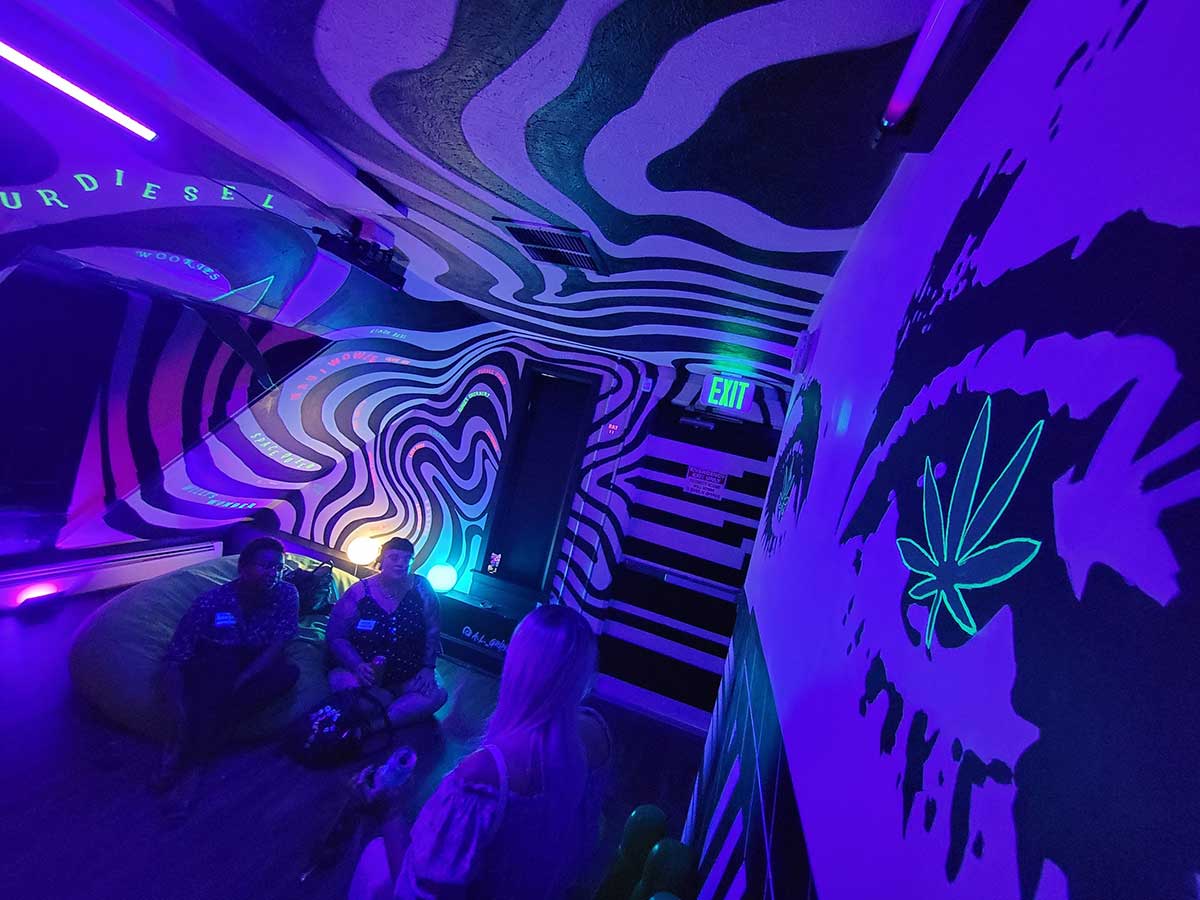 The talk of days gone by really framed the evening. The thought of a space where you can consume openly seemed at the beginning of the night somewhat like an end point or high water mark.  The more we talked about how things were though, the more we all began to realize that this is just another step, and a good place to jump out from into more equitable and just cannabis legislation and experiences. 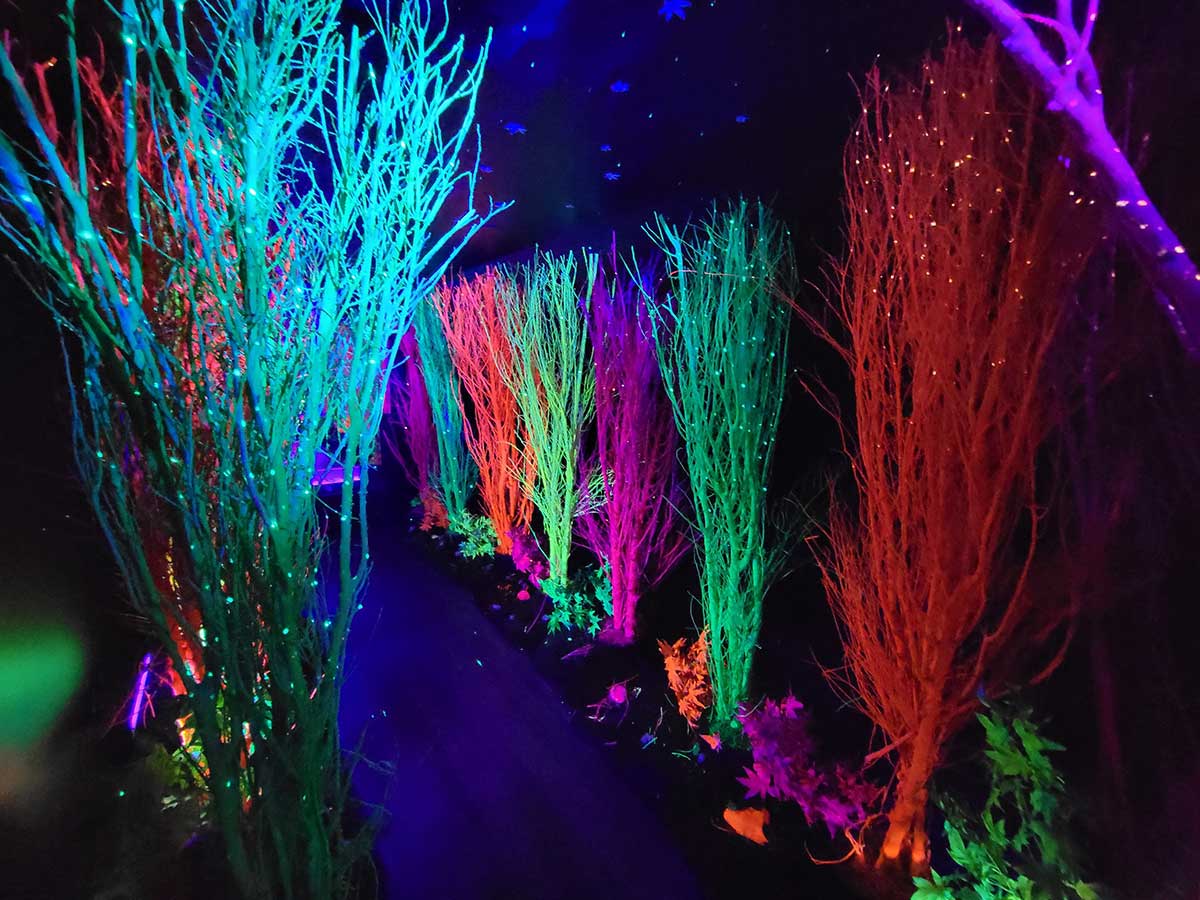 And that’s just it. It isn’t just necessarily a place to cop a buzz and take some Instagram pics. It’s more than a cute hang out for your progressive work party. More than a cannabis-themed art gallery.  The Marijuana Mansion is at the cutting edge of cannabis business in Colorado. It is one of about a dozen groundbreakers in the Front Range that allow legal on-premise smoking.  While many of those businesses are leaning more towards the typical Amsterdam coffee houses and cafés, some are leaning to create sensible community spaces.

Standing out as truly unique in the Denver cannabis scene, the beautifully curated visual, tactile, and psychotropic experience purposes to give back to the community of cannabis users who worked hard to bring us where we are today, by continuing to destigmatize the use of marijuana, and bring us open spaces where we can talk about the future, and toke up while we do it. 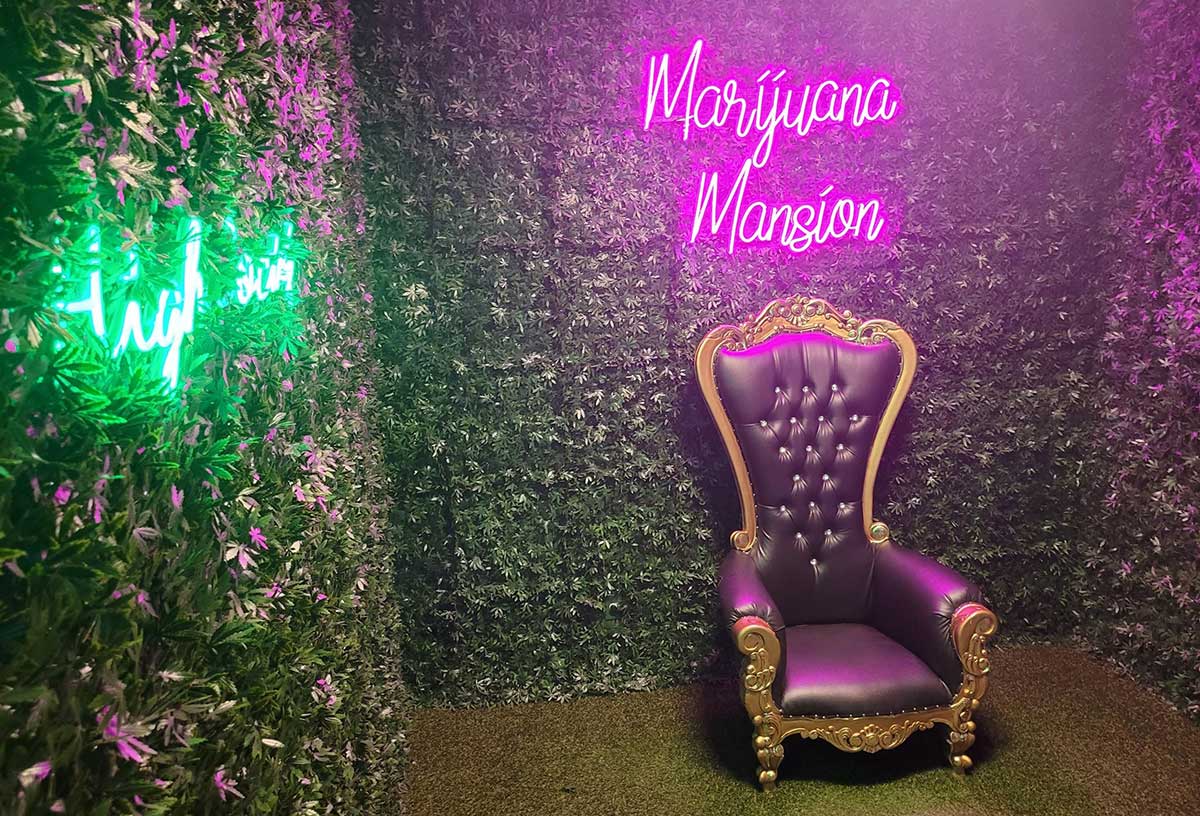 View all posts by Erin Reese →