Correction: The article incorrectly stated Dionne Waugh as Police Chief. Article has been corrected to reflect her role as the Boulder Police Public Information Officer.

On October 11th of 2021, Jessica Aldama and her stillborn child were found on Boulder’s outskirts in open space land off of 5847 Arapahoe Avenue. Five weeks prior, Aldama was issued a ticket in Boulder for possession of a tent and a camping violation. Per Sam Becker, a Boulder freelance writer and researcher, this ticket from the Boulder Police and an additional negative experience with the City’s Homeless Outreach Team forced Aldama to move to a remote area where access to services and health care is mostly unavailable. 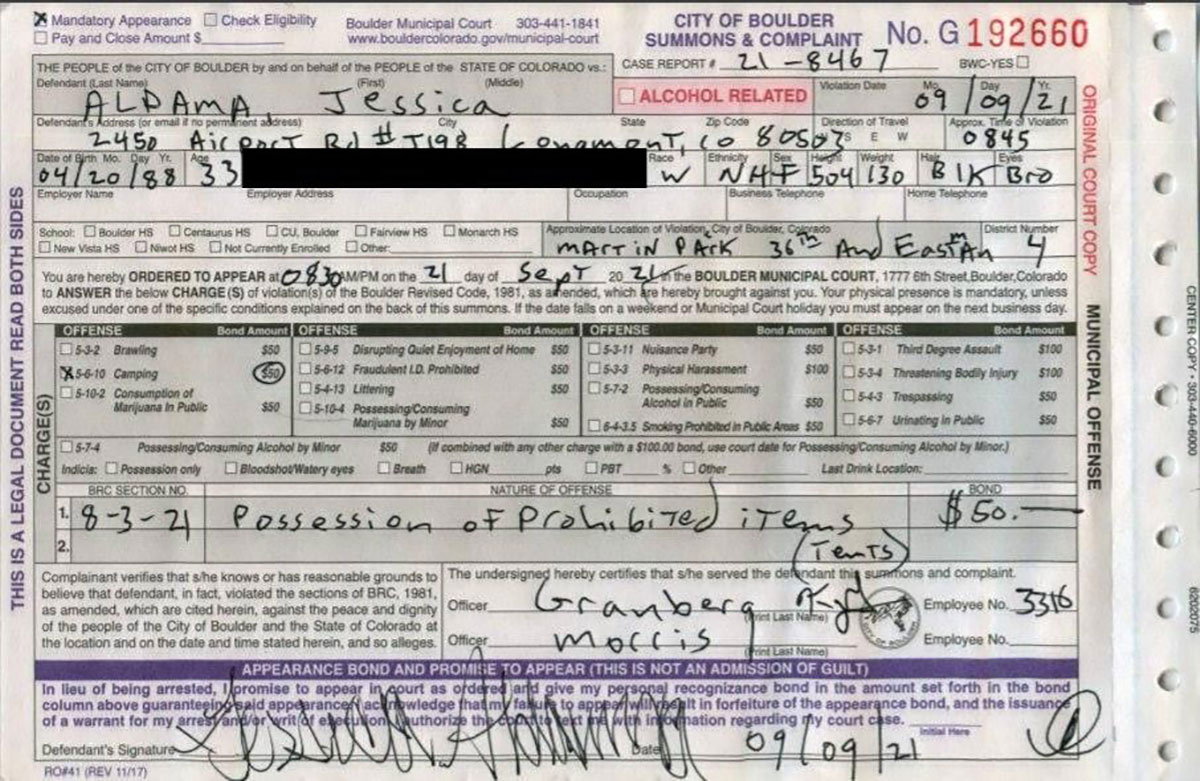 In a letter from the Colorado ACLU to the Boulder Police Department (BPD) written on December 23rd, 2021, the ACLU condemned BPD’s use of criminalization of the unhoused. They also call out the City’s misconception that unhoused residents in Boulder are resistant to services or refuse to stay in shelters out of choice.

“In the past, the City has defended aggressive enforcement of its camping ban by citing the persistence of unused beds at BSH, leveraging that data to advance a harmful narrative that the people on Boulder’s streets are ‘service resistant’ and voluntarily unhoused. But as we pointed out last summer, empty shelter beds were a product of Boulder’s policies of exclusion, not the personal choices of its unhoused residents. Indeed, Homeless Solutions for Boulder County (HSBC) had been unconstitutionally conditioning access to shelter on six months’ prior residency in Boulder County until it received the ACLU’s cautionary letter and reversed course. No longer skewed by HSBC’s discriminatory policy, the City’s data on BSH turn-aways now reflects what has long been true: shelter capacity in Boulder is woefully inadequate to meet community need.”

Yellow Scene Magazine spoke with freelance journalist and researcher, Sam Becker, who initially requested the documents regarding Jessica’s case. Becker is 25 years old and has lived in Boulder for over a year, after graduating from Claremont McKenna College in 2019. After reading about the case of Jessica in Daily Camera, Becker grew interested in the human rights violations committed in Jessica’s specific case. Becker sought to receive access to the files regarding Jessica’s case of being the first to obtain such evidence regarding the “extraordinary” efforts put in by BPD, that were not released in the initial article.

“Supposedly, police officers were at the scene to check in on Jessica and connect her with services. The reality, of course, is that they ticketed her for having a tent. Jessica should have been taken to the hospital, but for whatever reason, she wasn’t. We know police officers aren’t medical experts. And the services for the unhoused in our community, especially pregnant individuals, are rather nonexistent. Understanding that the city council has tasked police officers to ticket, arrest, and remove unhoused residents for existing makes the situation a little clearer. Based on the records that I requested and then received, the case was not just a routine check-in or encounter. It was another example of how police are enacting this regime of criminalization that the city council has ratcheted up over the last year.”

“I received unredacted body cam footage, but BPD is sending me a redacted version of that footage soon.  In the body cam video, the police officer and the paramedics who eventually showed up were skeptical that both people’s clinic and the hospital could help.”

“There was no conversation about Mother’s House or a shelter that would specifically cater to the needs of Jessica as a woman, let alone a pregnant woman.” 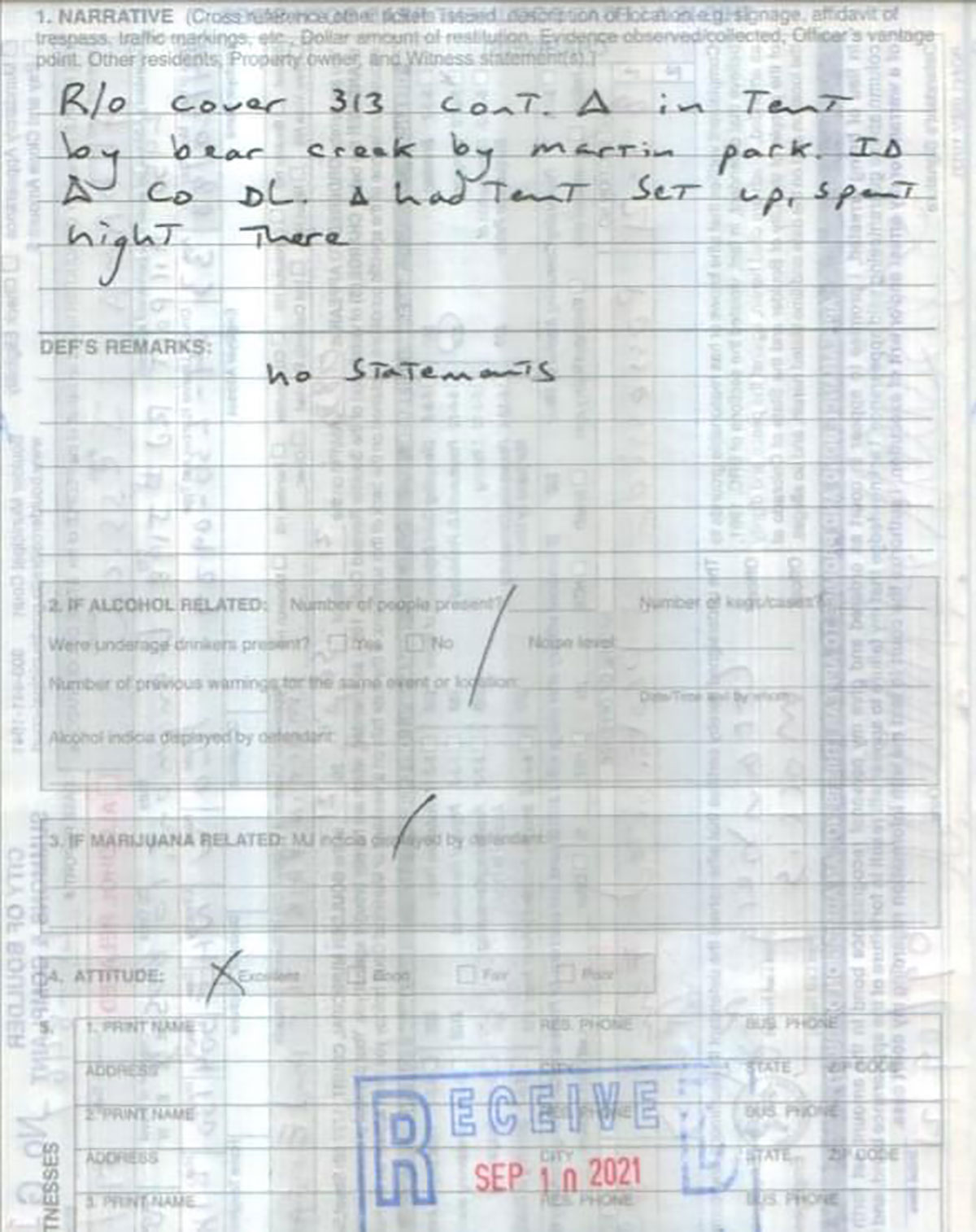 Back of ticket issued to Jessica Aldama. Sourced from Darren O’Connor’s Facebook.

As Becker said, Jessica should have been taken to Boulder Community Health (BCH). Despite the police officers’ and paramedics’ opinion, BCH offers a wide range of prenatal care including family planning. The hospitals website lists the various options pregnant women have and even encourages all people to deliver at BCH.

“What’s clear is that the police officer who’s questioning her, Officer Morris. The questioning is very harsh. This being the same officer who wrote her a ticket for existing, surviving in a tent. Her demeanor is different than when she’s interacting with the paramedics. She is very quiet and tries to avoid contact and interaction with the police officer. Whereas when she’s talking to the paramedic, she’s much more open, interested in having a dialogue.”

“This interaction shows what experts on homelessness say; police officers can’t both enforce the laws that criminalize homelessness and also try to be social workers for those experiencing homelessness.”

“Based on the interaction she had with this police officer who was making her feel uncomfortable. As someone who was probably already feeling very uncomfortable due to pregnancy issues, it would make sense to remove yourself from that interaction—the area where she was found, that interaction was far less likely to happen. I don’t think there’s any way of knowing for sure.”

“However, based on what experts say, people who have bad interactions with police are more likely to move away from spaces where those sorts of interactions could happen again.”

With most shelters only allowing people to spend the night, it leaves hours exposed to the elements, with no way to seek shelter without criminalization. The Boulder Camping Ban Ordinance is not something that is being affected by shelters capacity, because despite how many people they take in at night, their services cannot offer 24/7 care or shelter.

“At Boulder Shelter for the Homeless, the majority of people have to leave during the day. There isn’t a day shelter right now. People might want to set up a tent to do something or shelter from the elements, but that isn’t legal under the tent ban. Experts say that this sort of criminalization pushes people away from accepting services, pushes them into sparsely populated areas, like the one where Jessica was found.”

After thirteen days, YS was given the following statement from Boulder Police Public Information Officer, Dionne Waugh, stating that mental illnesses and addiction tend to be difficult to treat. This statement is rather ironic, with the City’s services for mental health and addiction dwindling over the past year.

“The City of Boulder takes a holistic approach to the complex issues surrounding the unhoused. The police department is one part of that approach. It includes our Homeless Outreach Team (HOT) that is focused on building relationships with homeless individuals–rather than enforcement–and educating them about the different resources offered by the City in hopes that these resources will positively impact their lives. The team also facilitates connecting them with the services for the needs they have and works collaboratively with a number of other homeless resources.

We also have mental health clinicians (CIRT) who work in coordination with the police department to provide direct services and referrals for behavioral health services. We have had some notable successes. However, there are some individuals who are resistant to services for a variety of reasons, and it is their right to decline our help. Some people experiencing homelessness suffer from mental health conditions and/or addiction, which are difficult to treat. Overall, the City’s focus is following the best practices of a housing-first model and has designed a system to that end.”

According to Sam Becker the Homeless Outreach Team that, Waugh mentioned in her response is the same organization that failed to provide Aldama with services. HOT took her to People’s Clinic again, providing no additional care to Aldama such as taking her to a women’s shelter or Boulder Community Health. This secondary interaction was only two weeks after her initial ticketing on September 9th, 2021.

“Members of the homeless outreach team brought her from Deacons Closet to People’s Clinic. There’s a distinction between the Homeless Outreach Team Officers and the Homeless Outreach Team. There are community members who participate in this outreach and service providers. However, again, the reality is that these police officers are first and foremost tasked with upholding the ordinances and laws that the City has enacted. And the social work they do is an afterthought.”

**Update: Boulder Police have indicated on the YS Facebook page that they want it made clear the Homeless Outreach Team does not issue tickets.

In that distinction being asked of us it is important to note, the Boulder Police Department does.

On the topic of the city’s “Housing First” approach, Becker had much more to say than city officials, listing the hard statistics on the number of people that this approach works with and for. With the city touting its effectiveness, the numbers tell a different story. The city often forgets to bring up crucial points like shelter requirements for entry such as being sober, which doesn’t happen overnight.

“Boulder has a ‘Housing-First’ approach. The staff and city council talk about it almost every time they’re asked about homelessness; the reality is it only covers roughly 12% of Boulder’s unhoused population.  A portion of the other 88% stays at Boulder shelter for the homeless, and a very small portion stays at some smaller shelters. A large portion of the 88% of unhoused residents left out of the ‘Housing First’ approach cannot stay at the existing shelters due to various barriers to entry. Whether unhoused folks are at Boulder shelter for the homeless, or other shelters, they are undoubtedly subjected to a regime of criminalization. The camping ban. Propane ban. Which is all heavily enforced by the Boulder Police Department. This regime does nothing but pushes people away from accepting services.”

With the municipal and district courts of Boulder supporting the camping ban, unlike the 9th circuit court case of Martin v. Boise where it was ruled that it is unconstitutional as well as cruel and unusual punishment to ticket the unhoused while sleeping outside if there are no available spaces in city or nonprofit shelters. It doesn’t look like the end of this crisis is at all in sight. With more people dying on the street as temperatures drop and after the recent fires leaving even more unhoused, who knows how the city will proceed or be able to cope. Life in Boulder, for those that are unhoused, will be nothing but tragedy. Just as it always has been with their very existence remaining criminalized, they helplessly watch their friends such as Jessica die around them.