Tell Me Everything: The Story of a Private Investigation By Erika Krouse

Erika Krouse became a private investigator because of her face. It’s the kind of face that makes people want to confess, to tell her their deepest secrets, and it’s because of her face that a lawyer named Grayson offers her a job, on the spot, working as an amateur private investigator on a landmark sexual assault case against a local university and its Big 12 football team. 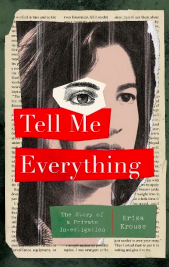 In Tell Me Everything: The Story of a Private Investigation (Flatiron Books; on-sale: March 15, 2022), Erika chronicles the years she spent working on that case, interviewing witnesses, and trying to prove a system of sexual violence at the university—years before the #MeToo movement, before rape culture was a commonly understood term, and all while grappling with her own personal demons.

The result is a riveting blend of true crime and literary memoir: Tell Me Everything is an enthralling page-turner, every new lead a thrill and every witness interview its own character study, and it’s all underscored by Erika’s spiky, searing narrative voice.

As the investigation grows into a national scandal and a historic civil rights moment, Erika finds herself getting pulled deeper and deeper into the case and forced to confront her own history of trauma. And when the investigation and her life both implode at the same time, she must figure out how to help win the case…without losing herself in the process.

ABOUT THE AUTHOR: Erika Krouse is the author of Come Up and See Me Sometime, a New York Times Notable Book, and Contenders, a finalist for the VCU Cabell First Novelist Award. Erika’s fiction has been published in The New Yorker, The Atlantic, Ploughshares, One Story, and more. She teaches creative writing at the Lighthouse Writers Workshop and lives in Colorado. Her debut memoir, Tell Me Everything, has been optioned for TV adaptation by Playground Entertainment.