Anniversary of the King Soopers Shooting: The community has moved on, but has it healed? | Community Corner 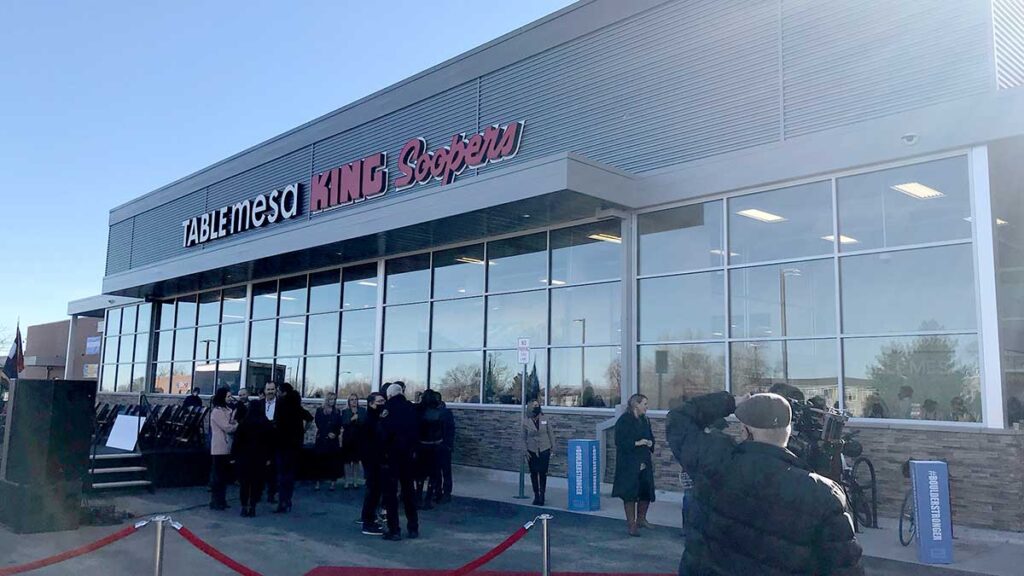 It has been a year since the mass shooting at the Table Mesa King Soopers, where 10 people lost their lives for simply going about their day in the wrong place at the wrong time. The shooter was charged with these killings in March 2021 and was ultimately found incompetent for trial. These mass shootings are something that have become far too common in our country. In the weeks immediately following the shooting, the community banded together at vigils and funerals to mourn those lost, but the loss didn’t go away just because we mourned.

While we see these shootings in the headlines everyday, it’s easy to become indifferent to them in the long term because they are so commonplace. As someone who was working at a different King Soopers that day, I saw firsthand how the scars run deeper than most realize. The community as a whole was affected, and the evidence was obvious in several large and small incidents I witnessed in the aftermath. 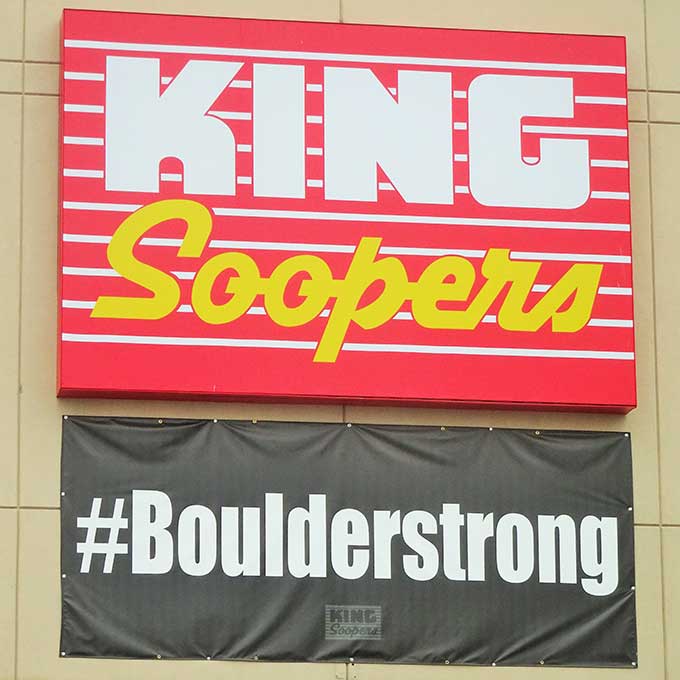 The morning after the shooting, I awoke to a text from one of my coworkers asking me if I planned to go into the store. She had just seen the news and was scared to go to work. She was even more scared because she rides her bike to work and the commute suddenly felt more treacherous than it had previously. She was born in the US and moved to Slovakia when she was nine and said multiple times how something like this, “never would have happened back home.”

When I got to work myself that day, the store was pretty slow and quiet, which was good because it left us employees with time to visit with each other, hug, and cry without stressing. Since our store was Rikki Olds’ original store before she transferred to Boulder, about half of us knew her and were in shock. Rikki was one of the people killed at King Soopers that day. She worked alongside us in the deli, bakery, and frontend in Louisville before she transferred. She was a personable bubble of sunshine who spoke with everyone.

Those of us who worked with her daily, and those who loved her, felt her loss deeply.

A regular customer, Anne, has been coming in almost every morning for longer than I have worked there. She knows everyone by name and is always eager to say hello even though she had just seen us the day before. Since she had known Rikki, she cried along with us and handed out little heart chocolates as a form of comfort.

The following week, I came back to my department and was told there was pizza in the break room courtesy of a caring customer. We’ve had pizza provided by management before as a reward for reaching safety goals and other accomplishments, but never before had a customer purchased something for the whole store.

With the Boulder Table Mesa store closed, many of its regular customers started coming to Louisville. They were pretty easily identified because they’d often preface their questions with a phrase like, “I’ve never been in this store before,” or even more directly, “I used to shop at Table Mesa.” Most were kind, but we could see some were expressing their grief through their comments, such as “The Table Mesa store always had what we wanted.” I helped a former Table Mesa shopper who had tears in her eyes and kept thanking me for being there. I wanted to hug her because she was so obviously barely holding together.

There were police officers in shifts hanging out in our lobby for a while after the incident in an effort to make people, employees and customers alike, feel safer. I think the public ought to know that this is something the police department went out of their way to do and not something King Soopers requested. One officer even shared words of encouragement and a hug with one of my coworkers when she stopped at the memorial inside the front door and started to cry. After the police left, King Soopers hired security guards, and they are still present to keep an eye on things now, a year later.

[BELOW: notes from the memorial tree] 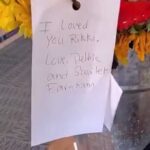 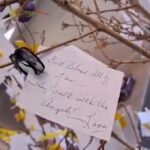 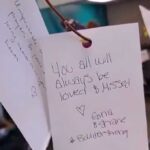 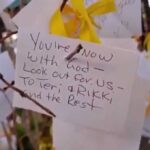 I was touched when I left work one day and saw that someone had left a bouquet of flowers on the police car parked in front of the store. The next morning when I arrived, more bouquets had been added, nearly covering the windshield. I imagine it was both a thank you to them for being there and an acknowledgement of the officer they had lost.

Two weeks after the shooting, I was helping a customer, and he asked me about exits and whether we had one at the back of the store. When I told him we do, he nodded to himself and said that was good to know in case he ever needed it. I didn’t need to ask why he might need to know; the scenario he was imagining weighs heavily on all of our minds everyday we come to work.

Down our soda aisle, the plastic piece that holds the soda on the top shelf broke. When it gave way, around ten, two-liter bottles of Pepsi fell to the ground and exploded with loud pops. One of the ladies in my department screamed, and when I saw her a moment later, she was shaking.

She had thought the pop explosions were gunfire.

Through King Soopers online customer surveys, people started leaving comments about how their hearts are with us in the wake of tragedy and other supportive sentiments. This was a nice change of pace from the complaints about the location of items in the store or items that have been discontinued.

Not all interactions were positive, however, and some people’s behavior was especially shocking and disheartening. One of our pharmacists shared a story just a few days after the shooting. A customer called and asked if we do COVID testing, which we don’t at our location. “That guy shot up the wrong store,” came the horrific reply before hanging up.

Near the time clock we had a log where employees were supposed to sign in when they arrived and answer questions about how they were feeling that day as part of the store’s COVID protocol. I was very upset to see that some jokester in poor taste had written “Eric Talley” on the log, just days after he had been murdered. It’s worse knowing that whoever wrote that is a coworker of mine.

In the face of such tragedy, it is hard to be empathetic to these types of responses to grief, but maybe laughing about it was the only way they knew how to cope.

I dealt with a lady who was complaining to me that she had come by the day before and had been unable to find anyone in my department to help her. I just apologized and held my tongue.

How was I supposed to explain, without crying, that the department was almost empty because most of us had been at Rikki’s funeral the previous day?

As a team, listening to customer complaints took a toll on us. One coworker finally snapped and told a woman who had been complaining that things were not to her standards that it was because we had been going to funerals and vigils all week. She immediately apologized and even apologized again when she returned the next day. Perhaps in our day-to-day lives we forget what others are going through, and while my coworker thought she could get in trouble for saying what she did, it served as a good reminder about what is truly important.

Time has helped us forget, and in some ways it seems life has returned to normal. On Feb. 9, 2022 the Table Mesa store had their grand reopening after being closed for the better part of a year going through a massive remodel. There is no other King Soopers that is like the new Table Mesa one.

The store’s entrance was completely redone and now features lots of windows, an unusual design for a box store, but the building is more welcoming and bright thanks to the natural lighting.

In addition to the windows, the interior is more welcoming with the implementation of murals. The overall atmosphere is more relaxing. 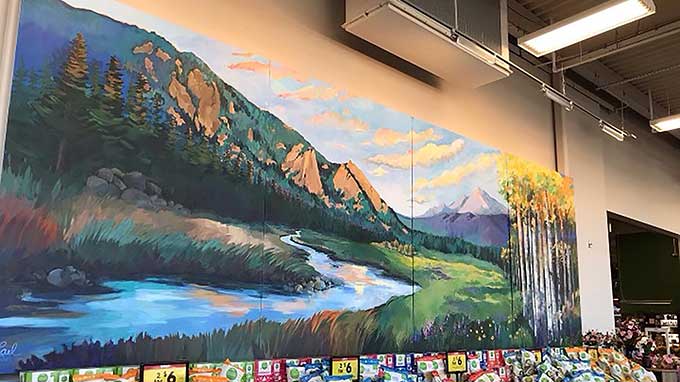 Many of the employees who worked there prior to the shooting, including some who were there when it happened, have made a return to the Table Mesa store. Since they were displaced by the store’s closure, they have been helping out in neighboring stores. The Table Mesa employees that I worked with in the interim were greatly excited to get back to their home store and see all of the people they worked with. They expressed that they hope to feel closer to those they lost by going back. Customers have come into my store since the reopening and voiced their pleasure in being able to shop there again. Despite its dark history, the Table Mesa location joins us all together. We feel stronger when we are united.

There is a plan in place to plant 10 trees near the store grounds; one tree for each fallen friend. These gestures not only help us remember the people who died, but it helps the community remember what it endured and that the connections we forged are not part of the past.

Each time something this horrific happens and we allow ourselves to accept it as inevitable, we are normalizing it. If it’s normal, we don’t think twice about it and nothing changes. In addition to being strong afterward, we need to take action to prevent there being a next time.

In 2021, there were 693 mass shootings in the U.S. according to Gun Violence Archive. How many did you hear about? They are so commonplace that they don’t even make international news most of the time.

For years, people have advocated for stricter gun control, but those debates haven’t gotten anywhere. How many bodies have to pile up before we admit that having the right to bear arms does not mean that anyone and everyone should be able to pick up a machine gun?

Gun control is not the only avenue for change. If there were enough support for people with mental issues, then it could no longer be used as an excuse for why people do terrible things. If we no longer accept mental illness as an excuse for poor behavior then we are forced to examine the true root of the violence.

Persistence is key here even though it would be easier to turn a blind eye, say there is nothing we can do, and then mourn the next round. Until something changes, another round of people will be murdered and injured at the wrong end of a war tool that everyone has a right to own.

We are Boulder Strong because we’ve had to be, but we shouldn’t have to be. We need to be strong enough to create change and prevent future communities from experiencing what we have.