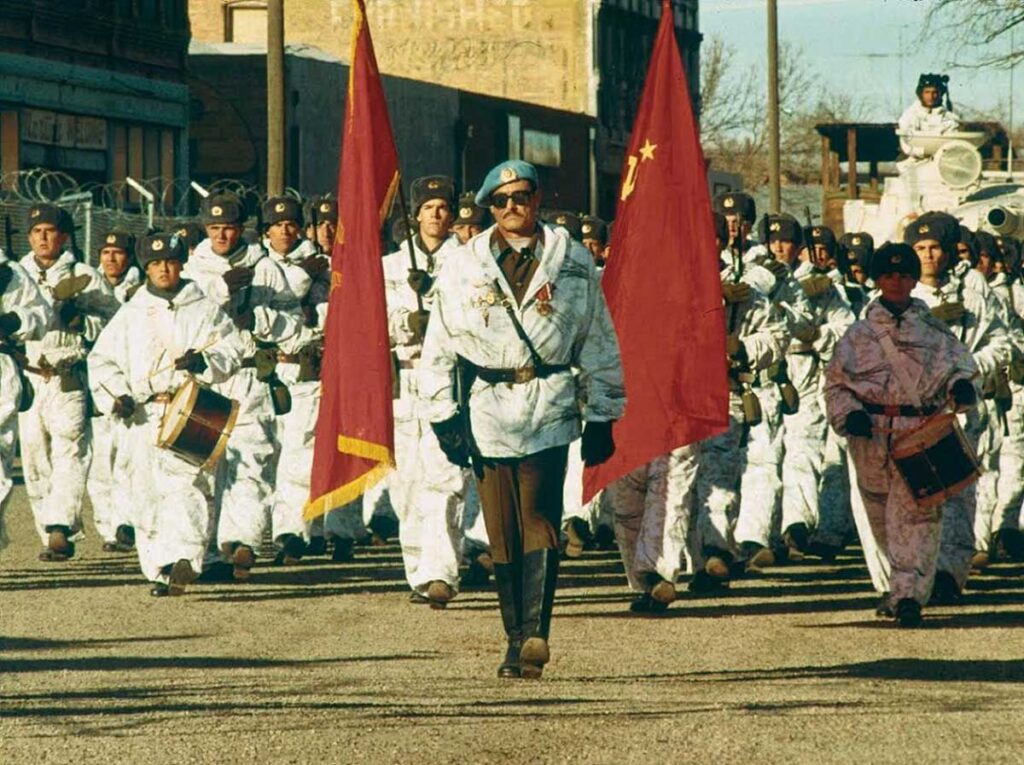 Colonel Ernesto Bella [in the now-occupied Calumet, Colorado]:  Look, I was always on the side of the insurgents. I have no experience in these matters, but it would seem necessary to win the support of the people. As our opponents used to say in Vietnam: “Win their hearts and minds.”

General Bratchenko: And they lost, Ernesto… Morale is crucial right now. Keep the men in the secured areas. You’ll see how they forget about these “Wolverines.”

As what could turn out to be WWIII plays out on every social platform and the evening news in front of us, I re-watched the 1984 Cold War ultra-propaganda film Red Dawn. The plot was a saber-rattling blockbuster story: Cuban and Soviet troops invade the U.S., occupying the middle of the nation from the Mississippi River west to the Rocky Mountains. The film takes place mostly around the fictionalized version of the now desolate town of Calumet, Colorado, where a small group of high school kids becomes a rag-tag guerilla band fighting against the occupying forces. They call themselves the Wolverines, adopted from their local high school mascot. The film stars Patrick Swayze as the leader of the guerillas and also features C. Thomas Howell, Charlie Sheen, Jennifer Grey, and Lea Thompson. Ron O’Neal plays the leader of the Cuban troops, Ernesto Bella, who turns in the most nuanced performance of the cast as a reluctant leader torn between the mission and his respect for the guerillas he’s forced to fight.

And as I re-watched one of my favorite Cold-War era movies (and there were a lot of them), 5,700 miles away Vladimir Putin rolled his army into the capital of Ukraine in a stunning display of militaristic bravado. After weeks of his own saber-rattling and facing a historically significant set of sanctions, his ego seems to have taken the helm. Now, as the Ukrainian populace fights their own protracted guerilla conflict against the mightier invading forces, the United States remains on the sideline — at least as of the time of the writing of this column.

From the sidelines, the American populace has morphed overnight from a collection of epidemiologists into foreign policy experts and historians with a collection of quick takes on Slavic history that would make Catherine the Great blush.

Perhaps the most interesting sociological display is the alignment of so many GOP isolationists with far-left progressives who seem to share a “let’s not get involved” stance while Russian tanks rumble through Kyiv and TikTokers share video of how to drive abandoned Russian military vehicles with each other. And then there’s the irony of an American, and now Canadian, populace whose impotent tantrums about wearing masks and taking vaccinations as a form of tyranny look especially stark against the backdrop of this newly burgeoning conflagration on the edge of the Baltics.

Where this ends is hard to guess — Putin’s reach might just exceed his grasp where former-Soviet-states-turned-NATO members are concerned, if those are indeed on his next-to-invade list.

One thing is certain: Winning the hearts and minds of the populace he wants to annex isn’t on the agenda — unless it’s a loudmouthed cadre of poorly-educated Americans with a Facebook account he’s got his sights set on.