The Heroes: Nurses of Boulder County 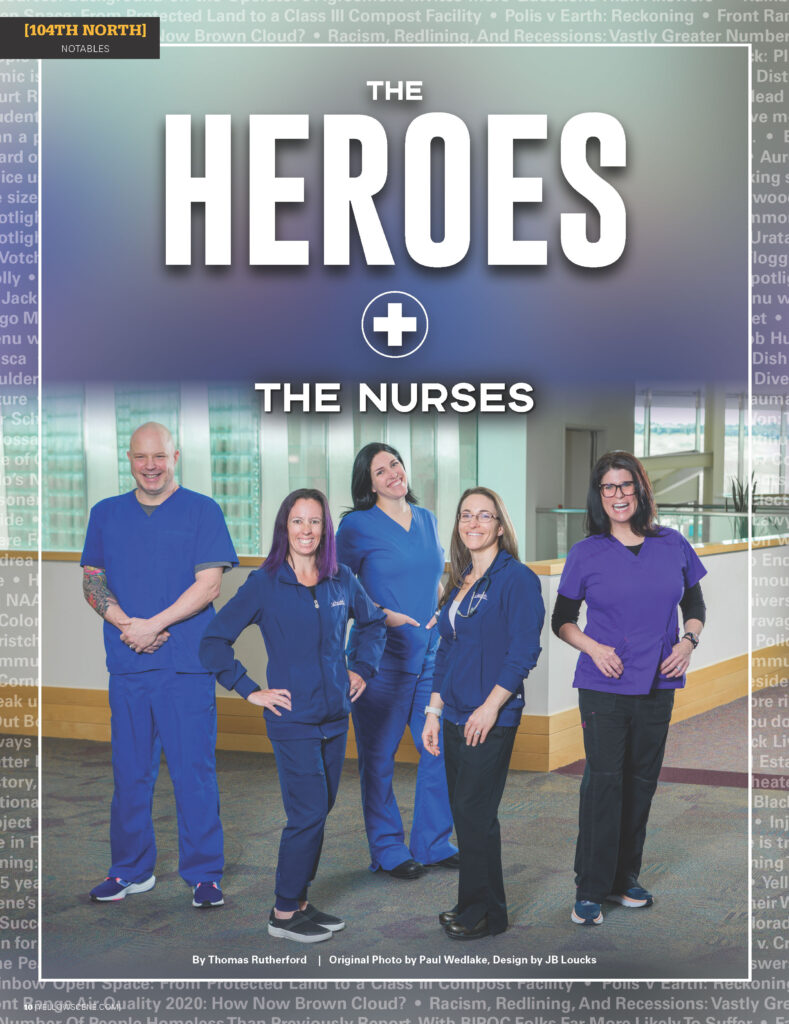 After facing a pandemic head-on, nurses are still saving lives

We are highlighting nurses for this next installment of Yellow Scene Magazine’s (YS) 2022 Heroes Series. These are our lifesavers, solace givers, and the warm hands that comfort us when things are at their darkest. This was the case long before COVID hit and will continue to be far off into the uncertainty of our collective future.

We have all felt the weight of the times we currently live in, but arguably, no one has felt it more than our healthcare workers. They deal daily with that which many of us have only seen in our nightmares, firsthand witnesses to the devastation wrought by a global pandemic. Still, they show up ready for the long shifts, to bring life into the world, to fight to keep life from leaving it, and many times, to act as the sole source of comfort when a person’s fight has come to an end. They do this at great personal peril—risking their health, their ability to see their loved ones, and their mental and emotional well-being. Their bravery, warmth, and kindness in the face of so much death and confusion are why we are highlighting nurses as this month’s heroes. 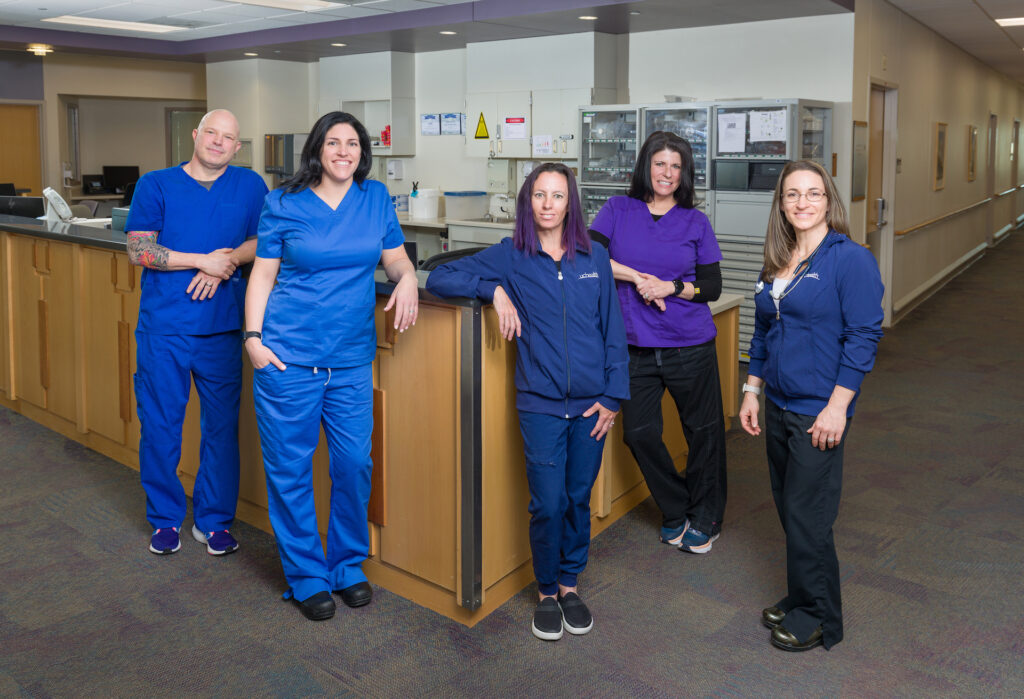 A recurring theme in this series is that those we tend to see as most heroic are the ones most reluctant to describe themselves as such—and are often undervalued in terms of pay.

Similar to February’s firefighters and March’s teachers, the six nurses I spoke with—two each from Boulder Community Hospital (BCH), UCHealth, and Good Samaritan Medical Center, expressed a degree of discomfort with being called heroes. Jeff Carter, a registered nurse from BCH put it simply, “I don’t consider myself a hero. I consider myself a nurse. Taking care of sick people is what we do, man.” This sentiment was echoed by Tracie Rupert, a medical unit nurse from UCHealth. She said, “I don’t think any of us do see ourselves as heroes. I mean, we did sign up for this. It’s something that we all have: A big heart to care for individuals. I think the only thing that I can see as being a hero is that we keep showing up.”

As they keep showing up for us, we must also show up for them. At the beginning of the pandemic, society outside of the nursing community was incredibly vocal in its support for frontline health workers. People were howling out the windows, creating and donating to GoFundMe fundraisers, and donating supplies. After a time, that support waned, which served to influence the discomfort many nurses now have with the term hero. Rupert believes that a lot of the early appreciation has dissipated as a result of misinformation that leads to a lack of understanding by society as a whole about what healthcare workers go through daily. “They have a bit more demand on us and forget what we, as nursing staff, have gone through, knowing that we were short on personal protective equipment in the very beginning of this pandemic and knowing that we’re risking our lives and trying to stay on top of the science during this whole pandemic and what’s coming, what’s new, our trust in the vaccines, trust in the new treatments. I think a lot of people are not trusting us as much because of the fake news and doing their own research versus listening to the science. So I do feel like we’ve been pushed aside a bit. We’re trying to just put a smile on our face and keep plugging away.”

Dean Beacom is an intensive care nurse at Good Samaritan who spent the majority of his time one on one with COVID patients, oftentimes the last person in the room as a patient passed. He also talked about the discomfort around the term hero stemming from systemic issues, expressing a fear that it could allow society as a whole to forget where real change needs to be applied. He said, “It felt much more like a passing of the buck than a compliment. Rather than be called heroes, we wish our culture had owned up to what it had done wrong and worked towards true change.” The systemic issues he referred to include a lack of competitive pay for non-traveling nurses and unpreparedness in the face of an unprecedented global event as well as a lack of support from hospital administration as a result. He told me, “I remember the day that they first brought administration back to the facility. They came into the ICU, and they stood a good 20 feet from the door and said, ‘Hey, guys, thank you guys so much.’ They brought us some pizza, and then just wouldn’t pay us more, wouldn’t give us anything else.” He went on to say, “This is where I say it’s systemic. I don’t blame any individual. I don’t say that one person was some evil overlord that did anything. But I think that the system came back in, and the first order on the day of return was to reinforce the dress code.”

Nurses were forced to be there for each other as a result of this lack of tangible systemic support.  Beacom organized a hiking group for himself and his peers to let off steam. He told me, “About three times a week we would all hike if we had a day off. There was usually a group going and hiking these long aggressive hikes to purge and let it out.”

Melissa Mathias, an ICU nurse from UCHealth, said, “It made us come together, going through that trauma. When it all came down, it was pretty scary. We leaned on each other a lot for that support.”

This solidarity between peers went a long way toward helping nurses make it through, but some felt the need to turn to more structured forms of support. In 1984, Colorado implemented the Nursing Peer Health Assistance Program, which serves to support healthcare workers facing mental and emotional struggles. While not every nurse I spoke with has turned to these programs, Mathias found them extremely beneficial. She told me, “I reached out, and I had a counselor that was paid for, so it was free, and we were able to go and have that time that we could use to talk to somebody about what we’ve been going through.”

Even those who haven’t utilized these services still appreciate their availability and the help that they have provided to their peers. Laurel Fox, a nurse on the oncology ward at Good Samaritan said, “Nurses told me that they access [the programs] and they felt like they were supported. They will never forget, and they will never be able to get over what they had to go through when, multiple times a day, they were alone in a room with patients who were dying. We were there for them but still not entirely understanding of everything they were going through.”

Fox and Karen Rudy, a nurse on the maternity ward at BCH, were the two nurses I spoke with providing frontline care to patients with cancer and mothers and newborn babies respectively during the pandemic. Both have a unique perspective on the pandemic and what it means to be a nurse. Rudy told me, “I’m in this lucky area of working with families that are bringing babies into the world. That’s special for me, that I get to be there when people are happy and good things are happening.” She also talked about the nature of nurses themselves, saying,

“All of us are there because we like to go in and provide care for people who need care. That comes in so many different forms. That can be changing a bandage on a wound to just sitting with someone and listening to them talk. That’s the biggest thing is that people who are nurses and go in and do it day after day are doing it because they give a sh*t.”

Fox describes nursing as her “calling,” a fact about herself that she discovered when caring for her mother through a grave illness. She told me, “I made a deal with the universe that if she could survive that I would do what might be probably my true calling, which is nursing.” As an oncology nurse, Fox often finds herself acting as a source of solace to those whose time has finally come. She told me, “I feel like I’m a helper. I feel like I’m a guide to people that need to figure out how to get from life to death. I’m really good at that and [helping] the families to get there.”

In addition to their peers, the nurses turned to their family, friends, and hobbies to cope with the difficult times. Carter finds strength in his faith as well as in music, writing songs, and playing with his band and recently received the welcome news that he is soon to become a grandfather. Fox finds strength in her wife (also a healthcare worker), her garden, and her foster animals. Rupert is thankful to have her husband who listens when she needs him to, and she is always able to give her father a call. Rudy likes to exercise to blow off steam and also has a husband who will stay up and listen as long as she needs. Mathias’ husband and three kids are there to hold her up when she needs people to lean on. Beacom faced particular hardship on a personal level due to caring for his mother as she reached the end of her life amid the pandemic. He found solace, however, in his family and that they were able to be there with her when her time came to send her off as beautifully as she lived. Each nurse spoke of the power of these moments with their families, the strength that love elicits, the strength that becomes the will to keep going, to keep caring, to keep fighting for those who need someone to fight for them.

As for the final messages these incredible people want to put out into the world, Mathias says, “We’re all trying to heal and get back to some form of normalcy in our careers, and just loving and supporting everybody is all we can ask for.”

Rupert wants people to care for healthcare workers and mean it. She said, “Ask whoever works in the hospital system, ‘How are they doing?’ We’ve gone through a lot, and we’re still not breathing. We’re still kind of struggling to catch air.”

Rudy wants to think about the nurses of the future, saying, “It’s a really good time for us to muster up some strength and help bring up the next generation of nurses. I think that’s hugely important.  And just be kind.”

Beacom wants everyone to know that, despite major systemic hindrances, he understands that everyone was trying their damndest to make the best out of a horrible situation, saying, “They were trying every day just as hard as I am to do the right thing for whatever their belief systems are.”

Carter puts it to those out there that still haven’t gotten a vaccine at the risk of their own health and that of those around them: “Get vaccinated. Get the jab. I volunteer at the vaccination clinic. I’d rather see you there than see you on the COVID unit that I work on.”

On March 16, 2022, KDVR reported the first day in Colorado with zero COVID hospitalizations. Nevertheless, the weight of the past two years still hangs heavy on the shoulders of our nurses. These are warm, generous, open people who have faced down one of the worst chapters in our collective history and continue to show up. Let’s hear it for nurses.