Who is Indoctrinating Whom? Part II 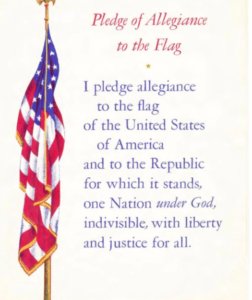 It is beyond ironic that today’s conservatives are passing laws restricting what can be taught or even talked about in America’s schools.  They claim that “government schools” have been indoctrinating young people into a radical “leftist” view.  The endless campaign to defund public education through vouchers and school choice schemes is based on the same claim.  But exactly who has been indoctrinating whom?

For those of us “of a certain age,”  indoctrination was always the intent, beginning with the Pledge of Allegiance, a daily practice required by law in America’s schools.  As any dilettante historian knows, the Pledge is not a constitutional artifact but began as a one-time Flag Day celebratory utterance written by a socialist – quite an irony itself.

We, small children, put our little hands over our hearts and pledged allegiance to a flag and to a complex nation under a “God” we could not comprehend.  The “God” part was added in 1954 because of lobbying by the Knights of Columbus, part of the never-ending effort to establish a de facto Christian nation.  The Supreme Court upheld the constitutionality of this blatantly unconstitutional religious indoctrination by the gimmick of allowing children to “opt-out.”  It would take a mighty brave child to “opt-out” and face scorn and humiliation.  We were then instructed through the day on what to think and what to read.  We sang My Country ’Tis of Thee and America the Beautiful.

There were only “right” answers to questions that might have many answers to the critical mind.  In a world of wondrous riches, we knew primarily of white male leaders and the art and music of white males in the Eurocentric realm.  Columbus “discovered” America and Indians were savages to be vanquished by brave explorers in our textbooks and by cowboys on our weekend movie theater screens.

The only Black faces we encountered were caricatures like Amos and Andy and we chanted “eenie, meenie, miny moe, catch a n***** by the toe” without a smidgen of discomfort.   I do remember one lesson about George Washington Carver and associated him – wrongly as it turns out – with peanut butter.

Gradually I became “woke” to the truth, but the long years of indoctrination are very hard to overcome.

Having sworn a daily oath to God and flag and singing “sweet land of liberty” and “God shed his grace on thee,” it is unimaginable to contemplate that this “sweet” land was stolen by force and that, if there is a God, he might well withhold his grace from a nation born in the subjugation and dehumanization of Black men, women, and children.  Or that “amber waves of grain” grew in forcibly confiscated fields and that the “fruited plains” were stained with the blood of conscripted workers.

And, of course, homosexuals were unnatural – perhaps mythological – as I knew no such person in my 3,000 student high school.  I finally came to understand the pain our society inflicts on gay folks when a very popular and funny college friend knelt at my dorm room bedside at 3 a.m. with a razor blade pressed against his wrist because it was becoming unbearable to live a lie.  He didn’t die quite then. I learned of his suicide a decade later.

The laws like the aptly nicknamed “Don’t Say Gay” law (CS/CS/HB 1557) in Florida do immeasurable harm to millions of children – those who are gay, lesbian or transgender or those whose parents are of the same gender.  Their experience – their existence – is minimized or erased for political gain.  Similarly, the many legislative campaigns seeking to outlaw anti-racism teaching are contradicting the lived experiences of children of color, their teachers, and their families.  It is as though being Black will be tolerated, but expressing what that really means will not be tolerated.

The direct harm is compounded many times over by the residual harm done by teaching millions of other children that there is something wrong with differing ways that gender and sexuality are expressed.  Or that they may ignore or deny the truth of history and the ongoing effects of racism in America.  Or that they, by God, have the unrestricted right to interpose their religious (Christian) beliefs in schools or any other public setting.

This is the true indoctrination, and it is exactly what conservatives want.

Steve Nelson is a local author and freelance columnist.