DENVER – The City and County of Denver this morning face another federal lawsuit seeking damages on behalf of 12 protestors over alleged unconstitutional assaults that Denver Police made on peaceful protesters and following the police murder of George Floyd in Minneapolis in 2020.

The new lawsuit comes in the wake of a $14 million verdict awarded to other protestors on March 25th by a federal jury in an earlier lawsuit filed by Loevy & Loevy, Fitouri, et al. v. City and County of Denver, No. 20-CV-1922-RBJ-MEH (consolidated with Epps v. City of Denver, No. 20-CV-1878-RBJ). Two attorneys who helped win the earlier suit, Elizabeth Wang and Makeba Rutahindurwa of Loevy & Loevy, are attorneys for the plaintiffs in the new suit as well.

According to the new suit, police used “constitutionally unlawful crowd control tactics, including kettling, indiscriminate and unwarned launching of tear gas and flashbangs into crowds and at individuals, and shooting projectiles at protestors….DPD and its mutual-aid officers knowingly placed these protestors in physical danger through indiscriminate use of excessive force.” 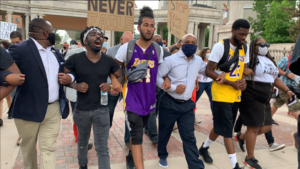 Besides the physical dangers posed by the police assaults, today’s suit charges that police used a variety of tactics to intimidate and deter people from ”exercising their First Amendment right to exercise freedom of speech, peaceably assemble, and petition for redress of grievances.”

As if to prove the point of the protests themselves – opposing police violence – the lawsuit alleges that the DPD and its mutual-aid officers used violence on protestors opposing the police murder of George Floyd and other Black people.

The DPD used “less-lethal” weapons “indiscriminately and without any or adequate warning, even at times when the crowd was merely chanting, kneeling or standing with their hands up.”

“Despite being roundly condemned by a federal jury in the earlier suit, Denver’s policymakers continue to dig in their heels and refuse to admit any wrongdoing on the part of the officers they ultimately supervise,” said Wang. “This head-in-the-sand attitude is a recipe for further police violence and other serious civil rights violations. Denver’s absolute refusal to consider significant institutional and policy changes and disciplining of violent officers is irresponsible from both public safety and public finance perspectives.”