Boulder County officials rejected a controversial ordinance aimed at reducing vehicular homelessness in the county after residents and housing advocates spoke out against the bill during a public hearing on May 19.

Commissioners Matt Jones and Marta Loachamin both raised concerns about some of the language in the ordinance during the public hearing. Jones said he was concerned about the language that explicitly states a homeless person does not have an expectation of privacy when they sleep on public lands. Loachamin echoed Jones’ concerns and added that she was concerned with potential “unintended consequences” from the ordinance. Commissioner Claire Levy was absent from the meeting.

“My understanding of this issue is that it started with vehicles blocking county roads, which is a land use issue,” Loachamin said. “But what I haven’t heard about is the data about people experiencing homelessness in Boulder County and how this will help us address the high cost of housing in our area.”

The ordinance in question, Ordinance No. 2022-1, would impose civil penalties of up to $300 per incident on people who are caught “residing” on public lands. Residing is defined as “temporarily or permanently sleeping, cooking, or otherwise engaging in activities of daily living,” according to the ordinance’s text. It is enforceable by city officials from the Boulder Sheriff’s Office, county security officers, and representatives of the county department of parks and recreation. 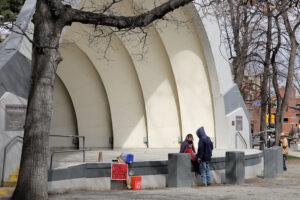 More than 30 people spoke during a public hearing for the ordinance on Thursday and an additional 60 emails were sent to the Board of County Commissioners. County officials said the ordinance is necessary to protect the quality of life of homeowners in the county who have complained about trash and sewage issues arising from increased homelessness. Advocates said the ordinance is poorly timed considering that Boulder is still rebuilding from the Marshall Fire as economic conditions like the increasing cost of living and high inflation threaten the housing stability of many residents.

“This proposed ordinance is an insult to the boulder community who is still recovering from the Marshall fire and will rebuild after future fires,” said Ryan Harwood, a representative of Boulder SAFE, a housing advocacy nonprofit. “Boulder Strong means supporting everyone in need. Let’s be clear: This is an attack on the working class. The people living in cars are our cashiers and other workers who cannot afford rent.”

Homelessness has become a much more visible problem in Boulder County following the COVID-19 pandemic. The number of people experiencing “unsheltered” homelessness in Boulder, meaning that they primarily sleep outside, doubled between 2019 and 2020 from 53 people to more than 118, according to regional Point in Time Count data from the Metro Denver Homeless Initiative (MDHI).

In response, Boulder County Sheriff Joe Pelle said his office approached the Board of County Commissioners to create an ordinance that would allow law enforcement to deal with an increasing number of complaints from homeowners about trash and sewer issues resulting from increased homelessness. He described the ordinance as a tool to help officers educate people about the city’s ordinances while maintaining the quality of life for homeowners.

“We’re trying to balance a couple of issues here that are obviously tricky,” Pelle said. “This ordinance won’t solve the problem but will allow us to deal with a particular aspect that is impacting our community.”

Conrad Lattes, an open space attorney with Boulder County, said the proposed ordinance is less restrictive than similar legislation that was passed in other jurisdictions.

“The goal is not to punish but to protect county land to and prevent adverse impacts to the county and our neighbors,” Lattes said.

But many Boulder County residents at the public hearing said the ordinance is an illustration of how the county talks about taking a Housing First approach to solving homelessness and then fails to back up its assertions with legislation.

Housing First models refer to the process of placing a homeless person into housing before they receive other treatments for behavioral health, mental health, or substance abuse disorders, according to the National Alliance to End Homelessness. This approach is “guided by the belief that people need basic necessities like food and a place to live before attending to anything less critical,” the organization says.

Michael Denslow, a scientist from unincorporated East Boulder County, said he is shocked at the timing of the ordinance since there are still large swaths of the community who are displaced because of the Marshall Fire, which destroyed more than 1,000 homes and caused more than $500 million in damages.

“At a time when people are struggling to pay rent and afford food, this is the solution we’re providing?” Denslow said. “People just want a place to rest rather than being pushed back into the cycle of poverty.”

Maria Colvin, who is experiencing homeless in Boulder County, said the ordinance would make it harder for people like her to enter the county’s service pipeline, which she describes as a Catch-22. She said that the county offers very few real ways out of homelessness and that criminalizing survival only puts people further away from accessing housing.

“There’s no reason to continue criminalizing poverty if your goal is to help people access housing,” Colvin said. “It just doesn’t make sense.”

Colvin also connected the proposed ordinance to Denver’s urban camping ban, which turned 10-years-old on May 14. Denver officials have consistently said the city’s camping ban was designed to reduce homelessness and connect more people with services, two claims that city data does not support.

Since Denver’s camping ban was enacted, Denver police have made more than 27,000 contacts with homeless people and connected just two percent of their contacts with services, according to city data. Meanwhile, the number of people experiencing unsheltered homelessness in Denver has grown from 1,000 in 2012 to more than 1,500 by 2021, according to MDHI data.

Darren O’Connor, the criminal justice chair of the Boulder County branch of the NAACP, said strengthening Boulder’s camping ban is “inhumane,” citing the case of Jessica Aldama, a pregnant homeless woman who died on Boulder’s streets after a stillborn delivery after receiving several tickets for unauthorized camping in the city.

“This ordinance is an admission that the county has failed to serve its community,” O’Connor said. “As people continue to rebuild from the Marshall Fire, your response is to punish the victims by criminalizing sleeping in their last resource—their cars.”

Kyle Castleberry, who lives in a recreational vehicle in Boulder County, told county commissioners that the real issue that the ordinance seems to take aim at is containment of homeless people’s belongings. He said these issues could be resolved by increasing trash services rather than with fines and penalties.

“It’s clear that some people don’t understand how difficult it is to be homeless,” Castleberry said. “But this needs to be the start of the conversation. So, let’s get into it.”