Boulder Comedy Festival is June 23-26th! The festival highlights women and diversity in comedy. Nationally touring comics featured on Late Night and Comedy Central come together with local comedians to create a sea of hilarity in Boulder and the surrounding areas. 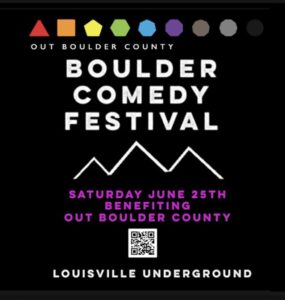 Shows will be in Boulder at the Hotel Boulderado’s License #1, Finkle and Garf Brewing, Front Range Brewing in Lafayette, Tilt and Tiki on Main in Louisville. Boulder Comedy Festival is sponsored by Colorado Sound and Johnson and Klein Law.

Tickets are on sale at BoulderComedyFestival.com