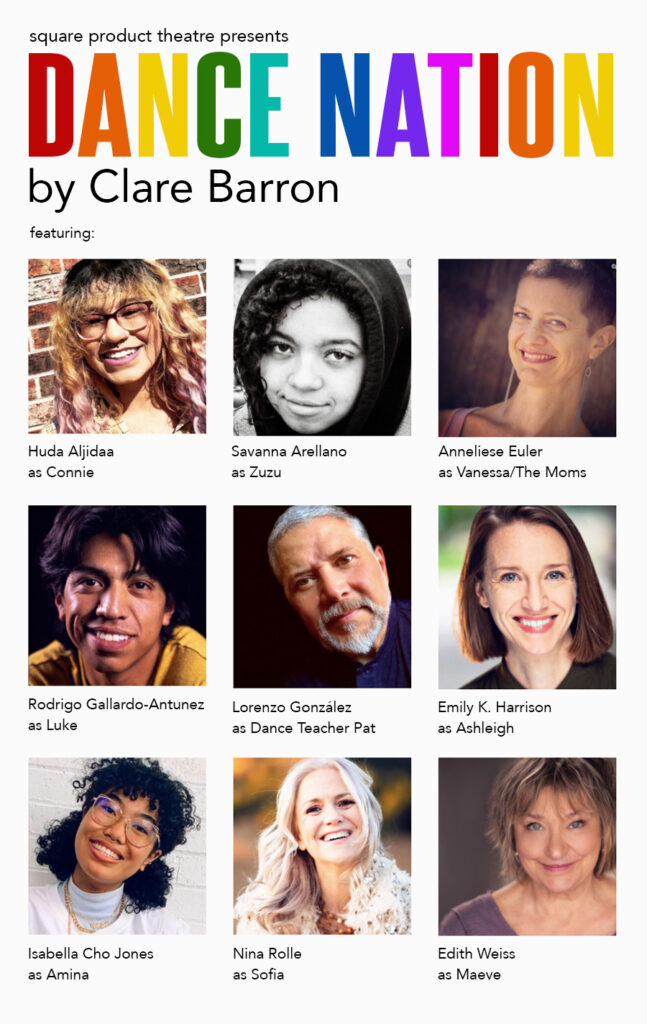 Somewhere in America, an army of pre-teen competitive dancers plots to take over the world. And if their new routine is good enough, they’ll claw their way to the top at the Boogie Down Grand Prix in Tampa Bay. But in Clare Barron’s raucous pageant of unbridled ambition and ferocity, these young dancers have more than choreography on their minds, because every plié and jeté is a step toward finding themselves, and a fight to unleash their power. “Dance Nation” is a play about ambition, growing up, and how to find our souls in the heat of it all.

“We’ve been preparing to produce this play since before the COVID-19 pandemic hit, and are thrilled to finally be able to safely share this work with Colorado audiences,” says Emily K. Harrison, square product theatre producing artistic director. “Dance Nation” largely explores the ways in which girls are socialized to minimize themselves and their power in a performance of traditional femininity. Playwright Clare Barron notes, “I wanted to present a different picture of teenage girls onstage. One where trauma wasn’t the central narrative. One where ‘being the best’ was.” Though the characters are 13-years old, they are played by actors ranging in age from 20-70, allowing audience members to locate themselves within the story. “The girls are played by women ranging (in age)…because the play is really about how we carry what happens to us when we’re 13 through the rest of our lives,” notes Barron. “The girls in the play are dealing with questions of who’s the best, who deserves to be recognized, what to do when the system is unfair, how to be friends and compete at the same time, and how to stand up for yourself when you’ve been trained not to.”

“The playwright calls it a ‘ghost play’ in which the older women – the women the characters become – haunt their 13-year-old bodies,” said Harrison “In this way we see them both as children, teetering on the absurd and fraught precipice of adulthood, and as the women they will become.” Director Gleason Bauer notes, “‘Dance Nation’ is a feral wolf howl, a primal screaming reclamation of girlhood. I couldn’t be more excited, after four long years, to be back in Colorado to direct this awkward, intimate look at the visceral power and humiliating humor of adolescence.”

square product theatre’s mission: The mission of award-winning, Boulder-based square product theatre is to engage in radical acts of inquiry that leave an audience with just as many questions as answers. We acknowledge that the land where we make and present our work is within the traditional territories of the Hinóno’éí (Arapaho), Cheyenne, and Ute Nations. Further, we acknowledge that 48 contemporary tribal nations are historically tied to the lands that make up the state of Colorado.

“A blazingly original play […] marvel at how close what you see cuts to the bone.” – The New York Times

“I have seen the future, and it is Dance Nation.” – The Washington Post

“If you were ever a 13-year-old girl, Clare Barron’s daring, raw Dance Nation will probably hit you hard […] It’s a brave, visceral, excitingly off-kilter barbaric yawp of a play. And it gets at something excruciatingly tender: the burden of modesty on young American women.” – New York Magazine