Boulder, CO – The Dairy Arts Center will kick off its new Musical Vanguards Concert Series on June 30, with world-renowned jazz guitarist and singer John Pizzarelli. Mike Karn will join him on bass and Isaiah Thompson on piano. This performance will precede two sold-out performances at Jazz Aspen Snowmass. 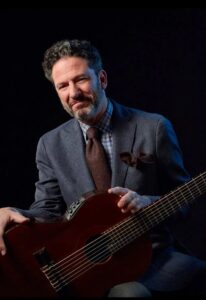 “We are thrilled to coordinate with Jazz Aspen Snowmass to bring musical legend John Pizzarelli to Boulder. For all you music lovers of any genre, this concert is a must-see, must-hear. Pizarrelli’s musicianship is stunning and a rare treat for those who cannot travel to places like New York City to hear such high-caliber artistry,” says Dairy Executive Director Melissa Fathman.

Pizzarelli’s recordings span the greats of jazz and the American songbook, a deep exploration of bossa nova, as well as a reinterpretation of the best of Paul McCartney—the album which earned the Grammy.

With heroes and influences as widely diverse as Nat “King” Cole, Sinatra, the Beatles, Jobim, Duke Ellington, James Taylor, Richard Rodgers, Joni Mitchell, Tom Waits, and George Gershwin, Pizzarelli brings their genius to the stage as a rare old-school entertainer. Established as one of the prime contemporary interpreters of the Great American Songbook, Pizzarelli has expanded that repertoire by including the music of Paul McCartney, Joni Mitchell, Neil Young, Tom Waits, Antônio Carlos Jobim, and the Beatles.

Pizzarelli has been hailed by the Boston Globe for “reinvigorating the Great American Songbook and re-popularizing jazz.” The Toronto Star pegged him as “the genial genius of the guitar.” And the Seattle Times saluted him as “a rare entertainer of the old school.”

As part of its mission to provide quality arts experiences for Boulder, the Dairy Arts Center is launching the Musical Vanguards Concert Series. For several years the Dairy has curated the best live music from local and Colorado artists, with just the occasional touring artists. This new series is a concerted effort to bring musicians who are leaders in music performance within their genres and often beyond genres.

Tickets for the John Pizzarelli Trio can be purchased on The Dairy’s website.

The Musical Vanguards Concert Series will continue with performances by: